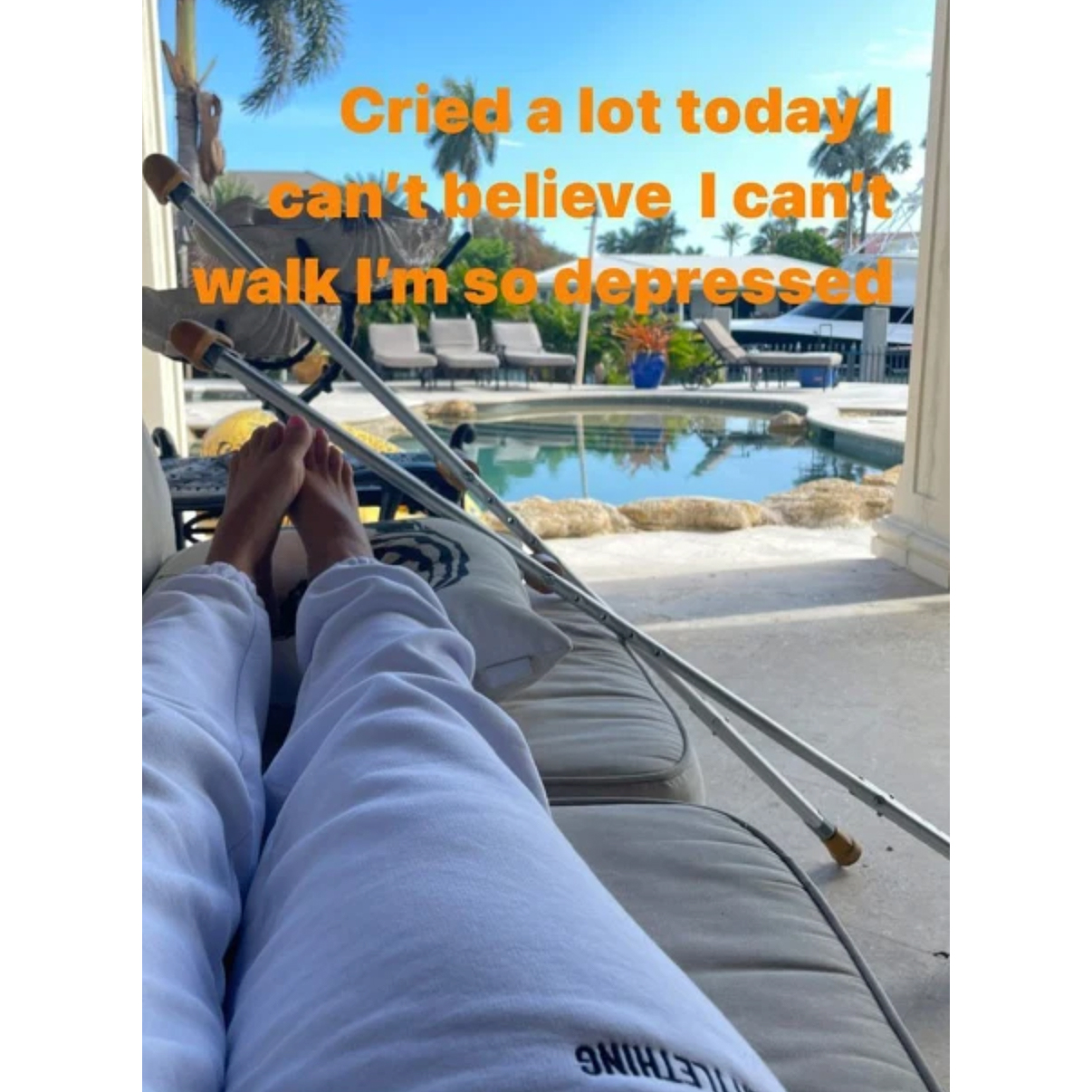 Not the best start to the week! Larsa Pippen revealed that she injured her leg via Instagram on Tuesday, March 30. She shared a photo of herself with her legs elevated and crutches nearby along with the caption: “Cried a lot today I can’t believe I can’t walk I’m so depressed.”

The injury comes after Pippen, 46, shared a since-deleted video of her and her friends jumping into the ocean off a yacht. She admitted she was in tears from the pain when her two pals had to help her out of the water.

The Real Housewives of Miami alum has since posted a new video to her Instagram Stories, in which she showed off a “new present” she received — a red Porsche. She kept mum, however, on who gifted it to her.

Pippen has recently been linked to Malik Beasley. Larsa and Beasley, 24, made headlines after photos of them holding hands surfaced in December 2020. The basketball player was married to Montana Yao at the time, but Pippen claimed that he was no longer with his estranged wife when their romance began.

Less than a week after the photos made it to social media, Yao, who shares son Makai with the Minnesota Timberwolves player, filed for divorce. The couple had originally gotten married in March 2020.

“We had spoken about it,” Pippen, 46, said of Beasley’s situation on a February 13 episode of Hollywood Unlocked With Jason Lee. “It wasn’t a secret.”

Larsa Pippen and Malik Beasley Drama: Everything We Know

She continued: “I googled them when I first met him — they weren’t together. They had issues before. It had nothing to do with me, so I wasn’t thinking anything about it.”

On Monday, March 29, a Minnesota court ruled on “temporary” requests made by Yao while Beasley motioned to prove the paternity of their 2-year-old son.

According to court documents obtained by Us Weekly, Beasley “now contests paternity” and has already taken the test to learn whether he is the biological father of Makai.

Yao “contends that Husband [Malik] is the biological father of the child but no Recognition of Parentage has been signed and Husband has not otherwise been adjudicate the child’s father,” the court docs state.

The Minnesota Timberwolves player’s attorney, Steven A. Haney, exclusively told Us in a statement on Tuesday, March 30, that the paternity test was “taken last week.” He added: “Given the facts and circumstances surrounding these parties’ relationship and lifestyle it would have been negligent not to have one performed. If he is deemed the biological father, he will comply with the order or the court. The Order was contingent upon paternity being established.”

The model’s rep told Us exclusively on Tuesday that her estranged husband “did want a paternity test and took the test” already. “It’s comical for her that he has requested a paternity test because this entire time on social media he has claimed Makai to be his son and he knows it’s his son.”

Reflecting on the recent controversy, Larsa said that she does regret how public her relationship with Beasley became when it was starting out. “I wish that wouldn’t have happened. What’s the point of taking a beating over a guy I had just started talking to?” she admitted to Jason Lee. “I just feel like I need to do a better job of not being public with my situation. I wasn’t trying to be public with this situation, but it just went and happened that way.”

The mother of four, who shares Scotty Jr., 20, Preston, 18, Justin, 15, and Sophia, 12, with her estranged husband, 55, added that “everyone eventually moves on,” which is what she and Beasley have tried to do.

Source: Larsa Pippen Says She Is ‘So Depressed’ After Leg Injury: Photo

Kristin Cavallari: How Jay Cutler Split Made Me a ’Better Mom’

Kristin Cavallari: How Jay Cutler Split Made Me a ’Better Mom’

Can Veterans Affairs officials spot another serial killer hiding in their midst?

Steve Harvey – Here’s Why ‘It’s No Surprise’ He Likes His Daughter Lori Dating Michael B. Jordan!

Billie Eilish Opened Up About Being Abused As A Minor