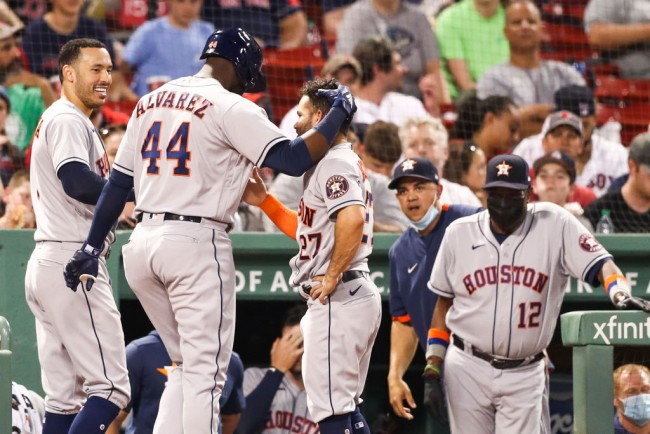 BOSTON, MA – JUNE 8: Yordan Alvarez #44 of the Houston Astros reacts with Jose Altuve #27 of the Houston Astros after hitting a solo home run in the fourth inning of a game against the Boston Red Sox at Fenway Park on June 8, 2021 in Boston, Massachusetts. (Photo : Adam Glanzman/Getty Images)

The Boston Red Sox had their five-game winning streak snapped on Tuesday with a 7-1 loss to the Houston Astros. Carlos Correa and Yordan Alvarez both homered for the Astros who remained one game back of leaders Oakland Athletics in the AL West standings.

The Boston Red Sox just can’t figure out Framber Valdez and the Houston Astros this season. Valdez (2-0) dazzled in Tuesday’s win against Boston, allowing just one run and five hits over 7 1/3 innings of action.

This was Valdez’s second consecutive win against the Boston Red Sox. Valdez held Boston to just one run in seven innings in their previous face-off last week. Enoli Paredes and Josh Taylor completed the pitching masterpiece as they threw 1 2/3 scoreless innings for the Astros.

It was Houston’s fourth win in five meetings against the Red Sox this campaign. The Astros defeated the Red Sox, 3-1, in their four-game series just last week. Houston has now outscored Boston 26-10 overall this season.

The Astros blew the game wide open in the second inning as they delivered a five-run barrage. Michael Brantley, who was activated from the injured list after missing 12 games with a hamstring injury, got the party started in the top of that inning with a double.

However, it was Carlos Correa who stole the show for the Astros, delivering three hits including a 310-foot blast that opened the scoring for Houston in the first inning. He is starting to heat up, as this was his sixth multi-hit outing over the last 11 games. On the season, Correa holds a team-leading 11 home runs to go with 14 doubles and an impressive .288/.372/.502 slash line.

Martin Perez struggled mightily with his command, lasting just two innings as he allowed six runs off six hits. It was Perez’s shortest outing in 12 starts and stopped his streak of four straight victories.

Perez’s performance was disappointing considering he was coming off a 7 2/3 scoreless inning gem against the Astros last week. Boston’s starters entered the game having gone five or more innings 50 times in 2021, tied for the most in the majors this season, making Perez’s short outing even more of a surprise.

The Boston Red Sox will look to bounce back tomorrow evening against the Astros with Nathan Eovaldi as their starting pitcher for this matchup. He has recorded 14 strikeouts over his past two starts, which marks Eovaldi’s highest strikeout total in a two-start stretch this season. Eovaldi has struggled at Fenway Park this season, however, with a 4.47 ERA. That’s more than two runs higher than his road ERA.

The Houston Astros, on the other hand, will have Jake Odorizzi as their starter for tomorrow’s matchup. The right-hander has made two starts since coming off the injured list with a right pronator strain. Odorizzi held San Diego to one run in 5 1/3 innings on May 29. He then struggled against the Red Sox on Thursday, allowing three runs in just three innings of action.