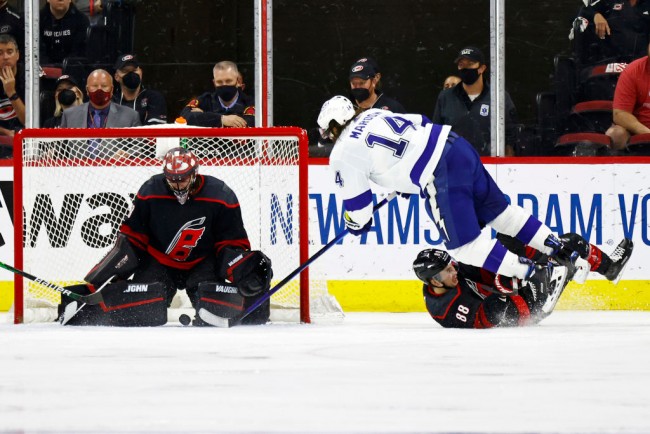 RALEIGH, NORTH CAROLINA – JUNE 08: Alex Nedeljkovic #39 of the Carolina Hurricanes makes a save against Pat Maroon #14 of the Tampa Bay Lightning as Martin Necas #88 of the Carolina Hurricanes hits the ice during the third period in Game Five of the Second Round of the 2021 Stanley Cup Playoffs at PNC Arena on June 08, 2021 in Raleigh, North Carolina. (Photo : Jared C. Tilton/Getty Images)

Tampa Bay’s title defense remains right on track after beating the Carolina Hurricanes, 2-0, in Game 5 Tuesday night to win their second round playoff series, 4-1. Brayden Point and Ross Colton scored for the Lightning who advanced to the Stanley Cup semifinals for the second year running.

The Carolina Hurricanes simply had no answer for Tampa Bay goalkeeper Andrei Vasilevskiy who was once again outstanding on the crease for the Lightning. He finished with 29 saves and thwarted the Hurricanes for the third time in as many series games at PNC Arena. The former Vezina Trophy winner as the NHL’s top goaltender, had surrendered just two goals on 70 shots through the first two games to open this series.

Vasilevskiy shuts out the Canes

Vasilevskiy has been sensational for the Lightning in series clinchers lately. Tuesday’s 2-0 win was his third career postseason shutout, all of which have come in three straight series clinchers, starting with last year’s memorable Stanley Cup clincher against the Dallas Stars. One of his 29 saves in Game 5 swung the momentum in Tampa Bay’s favor, pulling off a splendid glove stop against Carolina’s Vincent Trocheck on a 2-on-1 short-handed opportunity with the game delicately poised at 0-0.

Tampa Bay’s opening goal came moments after with Brayden Point scoring a power play goal at 4:06 of the second period. He calmly took a pass from Alex Killorn and faked to his forehand before scoring a backhand near the left post to give the Lightning a 1-0 edge.

Ross Colton then made it 2-0 for Tampa Bay at 9:04 of the third period as he capitalized on a turnover in the neutral zone by Steven Lorentz. Colton gathered the loose puck from that error and scored with a short-side wrist shot from the right face-off circle.

Carolina’s season comes to an end

It was a disappointing end to the season for the top-seeded Hurricanes who were in the playoffs for the third straight season after a nine-season drought. Carolina captured the Central Division crown for their first division title since winning the Stanley Cup in 2006, and were right in the thick of the Presidents’ Trophy race until the final week of the season.

Unfortunately for the Canes, home ice advantage didn’t count in this series. The Canes entered this contest having won 20 of their 28 regular season games at the PNC Arena but lost all three of their home playoff games against the Lightning in this series. Not even the return of Trocheck and winger Nino Niederreiter from multi-game injuries in Game 5 helped Carolina from avoiding another early playoff exit.

The Tampa Bay Lightning will next play either the Boston Bruins or New York Islanders in the Stanley Cup Semifinals. The Lightning currently hold a 3-2 advantage against the Bruins in that series.

Tampa Bay, who advanced to the third round of the Stanley Cup Playoffs for the fifth time in the last seven seasons, will fancy their chances in the next round. The Lightning have won each of the three playoff series against the Islanders and two of three against the Bruins.

Lakers’ Anthony Davis out at least 2 more weeks with injury