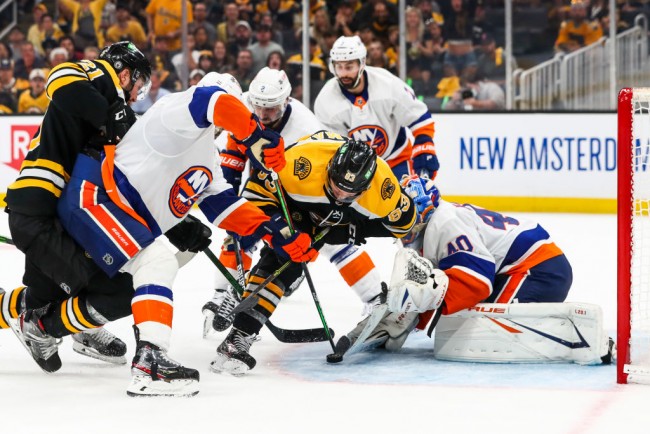 BOSTON, MA – JUNE 7: Karson Kuhlman #83 of the Boston Bruins attempts to shoot the puck in the third period in Game Five of the Second Round of the 2021 Stanley Cup Playoffs against the New York Islanders at TD Garden on June 7, 2021 in Boston, Massachusetts. (Photo : Adam Glanzman/Getty Images)

The New York Islanders moved to within a victory of the 2021 Stanley Cup Semifinals after beating the Boston Bruins, 5-4, in Game 5 of their Stanley Cup Second Round series at the TD Garden in Boston on Monday. Josh Bailey, Jordan Eberle, and Mathew Barzal each had a goal and an assist for the Islanders, who moved ahead for the first time in this series.

The Boston Bruins started Game 5 like a house on fire, taking a 1-0 lead 1:25 into the first period on a one-timer from Charlie McAvoy.

While they were on the ascendancy, the Bruins couldn’t extend their advantage, and that proved to be costly as the Islanders equalized via a power-play goal by Barzal 18:49 into the first period. Barzal has been in fine form of late, now scoring in each of his last three games.

Kyle Palmieri then scored another power-play goal at 4:49 of the second period to give the Islanders a 2-1 edge, tapping in near the left post after Bailey’s attempted pass hit the skate of Bruins defenseman Connor Clifton. The Bruins, however, equalized when Brad Marchand shot past Semyon Varlamov at the 7:27 mark.

The game swung in New York’s favor as the Islanders racked up three consecutive goals, one of which came via another power play. Bailey gave the Islanders a 3-2 advantage with a shot from between the circles at 14:30 before Eberle scored New York’s third power-play goal of the evening at the 16:38 mark to make it 4-2.

The Islanders finished the game 3-for-4 with the man-advantage as they scored on each of their first three power-play opportunities. They are now 9-for-31 (29.0 percent) with the man advantage in 11 Stanley Cup Playoff games this season.

The Islanders then opened up their largest lead of the series when Brock Nelson scored past Boston goalie Jeremy Swayman, who replaced Tuuka Rask to begin the third period. It was a tough night for Rask, who allowed four goals on 16 shots. It was the second time Rask was pulled out in 103 playoff starts. The last time Rask was removed in the playoffs was during Game 5 of the 2018 Eastern Conference First Round against the Toronto Maple Leafs when he surrendered four goals on 13 shots in 31:55 in a 4-3 defeat.

The Boston Bruins, however, fought back strongly during the third period. Bruins top-line winger David Pastrnak scored his second goal of the night, which came on the power play before David Krejci added another at 14:43 to make it 5-4 and triggered a wild finish in the final minutes. The Bruins outshot the Islanders 18-3 in the third period as they desperately searched for the equalizer.

Fortunately for the Islanders, Varlamov stood tall in the dying minutes to preserve the win for New York. He stopped 40 of 44 shots in Monday’s victory over the Bruins.

The series will now shift to the Nassau Coliseum in New York for Game 6 on Wednesday night, with the Islanders looking to clinch the series.

ISL Final: The evolution of Bipin Singh and Manvir Singh as goal scorers