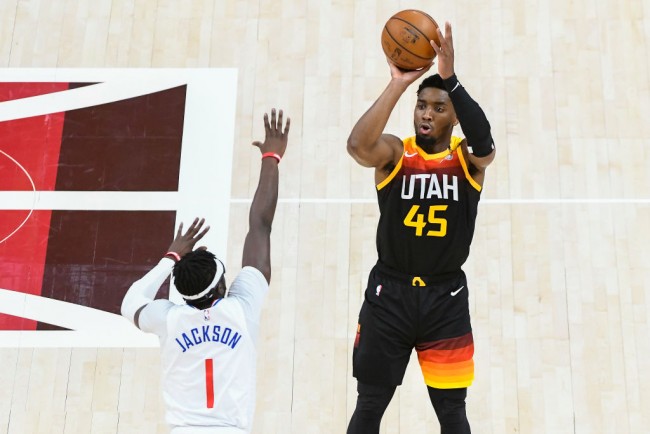 Buoyed by a raucous home crowd, the Utah Jazz delivered a memorable second half performance to escape Game 1 with a nail-biting 112-109 victory over the LA Clippers Tuesday night.

Donovan Mitchell provided the spark for the Jazz who have now won each of their last five playoff games dating back to their first round series win against the Memphis Grizzlies.

After a sluggish opening half which saw the Utah Jazz trail by 13 points during the break, Donovan Mitchell knew that he needed to get his offense going if they were to record the comeback win. That he absolutely did, scoring 32 of his game-high 45 points in the second half to lead Utah to the come-from-behind victory.

Donovan Mitchell explodes in the second half

Mitchell took over from the start of the second half, scoring four straight buckets, registering 16 points in nine minutes to help the Jazz regain the advantage. What makes Mitchell’s second half feat even more remarkable is that he was suffering from nausea and light-headedness during the game.

That will help explain Mitchell and Utah’s lackluster start with the Jazz missing 20 consecutive shots at one point in the first quarter. Utah started 3 of 25 from the floor with the Clippers quickly building a 24-12 edge as they went on a 22-2 run.

The Clippers kept the Jazz at bay during the second quarter thanks in large part to their hot outside shooting with LA burying seven of its 12 three-point attempts during this period.

It wasn’t just Mitchell, though, who stepped up for the Jazz offensively in Game 1. Bojan Bogdanovic scored 18 points and grabbed five boards while Jordan Clarkson drilled six three-pointers for Utah. Rudy Gobert delivered yet another double-double with 10 points and 12 rebounds as they stepped up big time in the absence of guard Mike Conley.

It was Rudy Gobert’s play on the defensive end during the closing stages that Utah fans will remember the most from his performance in Game 1. With the Clippers trailing by three points and the ball in their possession, Gobert was caught in an island with Marcus Morris in the perimeter.

However, Gobert showed why he is the league’s two-time Defensive Player of the Year, recovering just in time to block Morris’ game-tying three-point attempt to preserve the win for the Jazz and send the Utah fans into a frenzy.

That will be music to Jazz fans’ ears, with the Clippers likely employing that small-ball tactic for majority of this series to counter Gobert’s size.

The Clippers will take heart in the fact that they were able to keep the game close even with their main starters shooting blanks. Kawhi Leonard scored just 23 points on 9-of-19 shooting from the field while Paul George netted 20 points on a horrid 4-of-17 shooting clip.

One guy who stepped up for the Clips in this game and might play a pivotal part in this series was Luke Kennard who scored 18 points in 29 minutes of action.

Knicks have interest in trading for and potentially extending Andre Drummond: report

Why the pandemic has virtually killed practices in the NBA