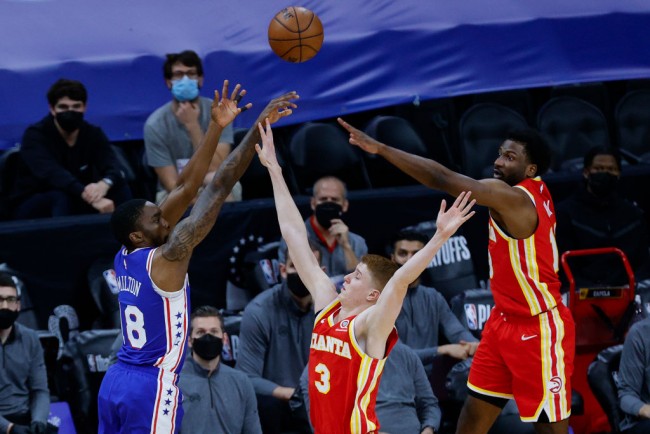 PHILADELPHIA, PENNSYLVANIA – JUNE 08: Shake Milton #18 of the Philadelphia 76ers shoots a three point basket over Kevin Huerter and Solomon Hill #18 of the Atlanta Hawks at the end of the third quarter during Game Two of the Eastern Conference second round series at Wells Fargo Center on June 08, 2021 in Philadelphia, Pennsylvania. (Photo : Tim Nwachukwu/Getty Images)

The Philadelphia 76ers bounced back strongly from their gut-wrenching Game 1 defeat, recording a 118-102 victory over the Atlanta Hawks in the second game of their Eastern Conference Semifinal series Tuesday night. Joel Embiid led the way for the Sixers who now head to Atlanta with the series tied at 1-1.

Leading the way for the Sixers was talented big man Joel Embiid. He shrugged off concerns regarding the small lateral meniscus tear in his right knee, scoring a playoff career-high 40 points and grabbing 13 rebounds.

Embiid became just the third player in the 76ers’ franchise history to have consecutive playoff games of at least 39 points, joining legends Allen Iverson, Julius Erving and Wilt Chamberlain in that esteemed list. He scored 39 points in the series opener against the Hawks.

The Hawks, however, survived Embiid’s onslaught as they battled back from a 21-point deficit to regain the lead in the third quarter, going up 80-79 with Trae Young’s two free throws. With the series hanging in the balance and momentum on Atlanta’s side, the Sixers were able to find a savior in Shake Milton.

After not playing in the entire first half, Milton quickly made his presence felt, canning a quick three-pointer to give the lead back to Philadelphia. Milton’s basket was the Sixers’ first bench points in 34 minutes with Atlanta holding a resounding 37-0 advantage in that department prior to that made shot.

That was the spark that the Sixers needed as they uncorked a 14-0 run that all but ended Atlanta’s uprising. Milton finished the game with 14 points in just 14 minutes of action.

It wasn’t just Embiid and Milton who carried the scoring cudgels for Philadelphia. Tobias Harris recorded 22 points, six rebounds and four assists while Seth Curry was sizzling from downtown, scoring 21 points as he connected on his first five three-point shots.

It was a bad day in the office for Atlanta guard Trae Young who failed to get his offense going in Game 2. After erupting for 25 first-half points in Game 1, Young was held to 11 points during the opening half of Game 2 with Philadelphia head coach Doc Rivers’ decision to put Ben Simmons on Trae Young working wonders for the Sixers defense.

Young finished the game with just 21 points on a horrid 6 of 16 shooting from the field. He struggled in particular from beyond the arc as he missed six of his seven three-point attempts.

It wasn’t just Young, though, who was missing shots on Tuesday. Bogdan Bogdanovic and John Collins combined for just 22 points on 10-of-27 shooting from the floor in Game 2.

They scored 21 points apiece in Game 1 and it will be interesting to see how they will bounce back in Game 3. The Hawks also were careless with the basketball in Game 2, committing 17 turnovers which the Sixers turned into 28 points.