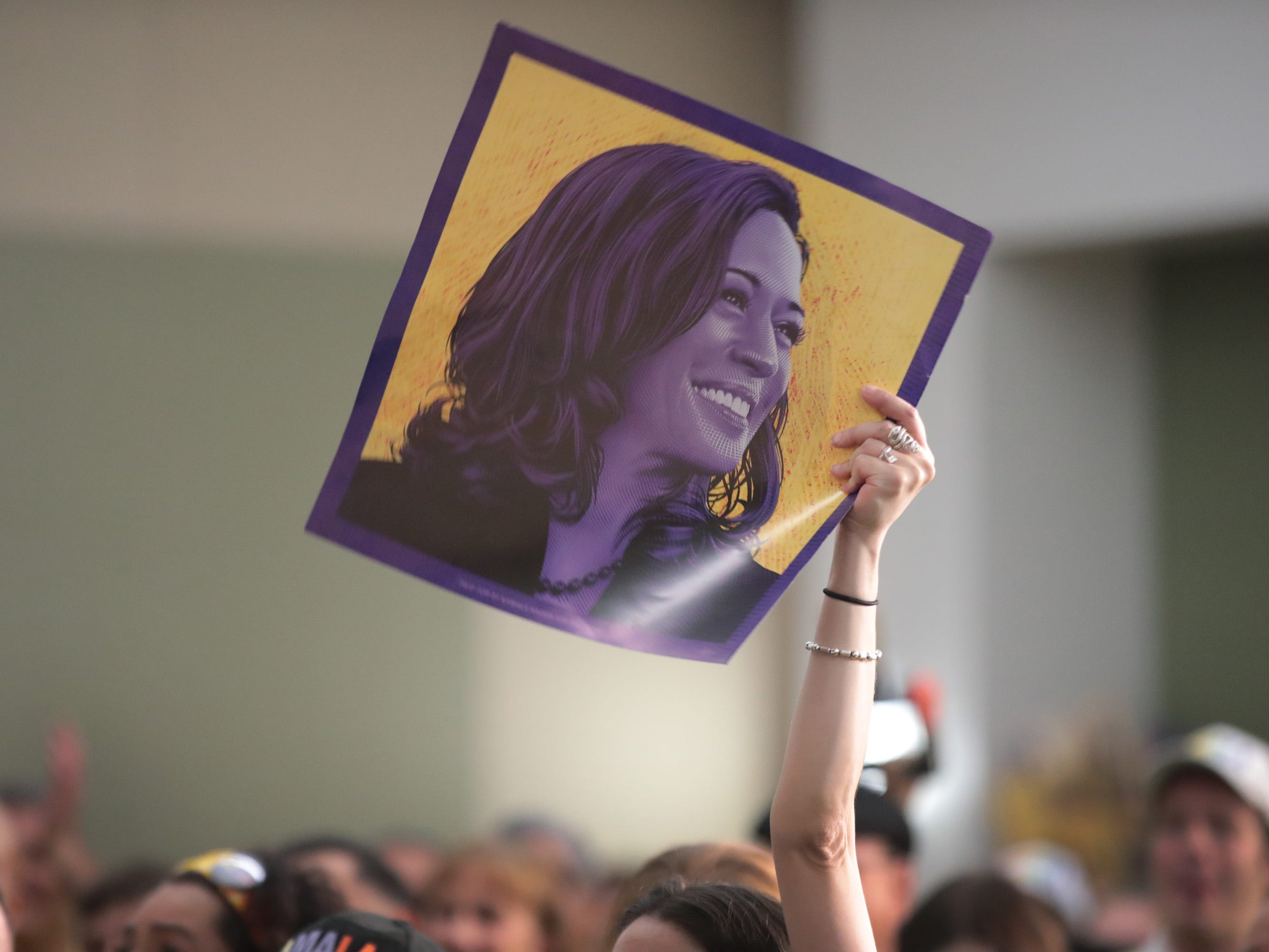 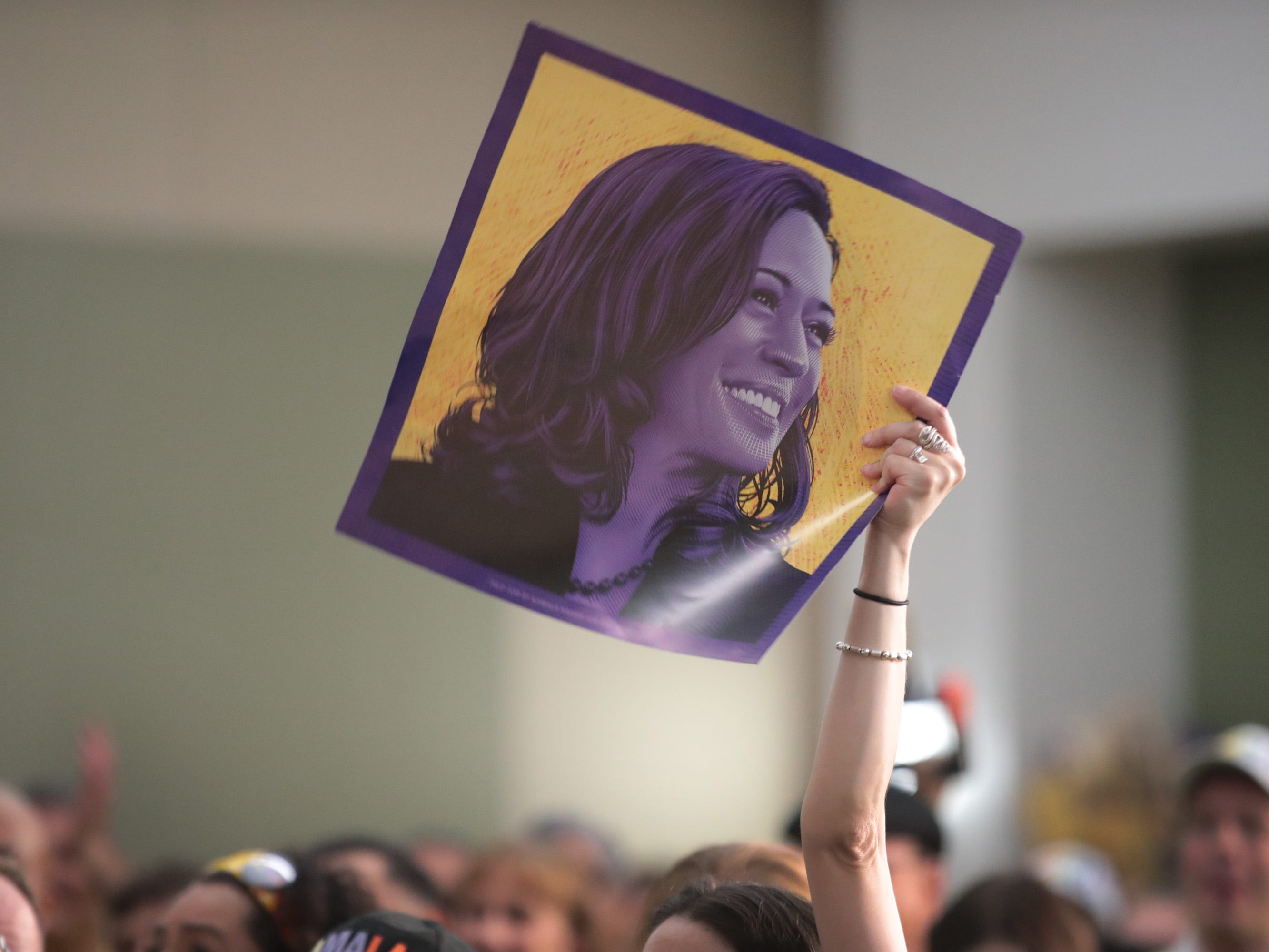 A supporter holds up a sign as Kamala Harris speaks before the start of the Liberty and Justice Celebration on November 01, 2019 in Des Moines, Iowa.

The so-called “KHive” is Vice President Kamala Harris' fiercely loyal online fan group.
Although it is loosely organized, the group is united in celebrating as well as defending Harris.
But the KHive has also been accused of bullying and harassment.
See more stories on Insider's business page.

When New York Post reporter Laura Italiano tweeted this week she was resigning because of an inaccurate article she was allegedly asked to write about Vice President Kamala Harris, angry Harris supporters swarmed her.

“I think I missed your apology to the Vice President,” one person commented on her tweet.

“You shouldn't wrote the damn story on the first place. Where you trying to get clicks and likes?” another wrote.

Italiano was experiencing the sting of the so-called “KHive” – Harris' fiercely loyal online fan group that has been celebrating as well as defending the vice president ever since she became California's senator in 2017.

“She broke so many barriers as a Black, South Asian woman,” KHive member Lecia Michelle from New Orleans told Insider. “So we must be here to defend her for who she is as a biracial woman.”

Read more: 15 Gen Zers in the Biden administration share what inspires them and how to get a leg up in Washington

Even though the “KHive” is loosely organized – it has no leader, and it is unclear exactly how many members there are – the online group makes sure its presence is felt.

Members are especially active on Twitter, marking their devotion to the vice president by using the #KHive hashtag or adding yellow hearts and bee emojis to their profile descriptions.

They share videos of the vice president's speeches, comment on the different outfits she's wearing, and post selfies in yellow and purple merchandise with her name on it.

They also organize virtual “cooking Sunday” parties and meet up on Zoom to watch major political events – most recently, they gathered online to watch President Joe Biden's first joint address to Congress together.

The group is united in its celebration of the vice president and amplifies the policies she promotes: KHive members speak out in favor of racial, gender equality, and LGBTQ inclusion. They support the right to an abortion and have applauded Harris on her carbon-neutral climate plan.

The KHive's support was obvious in the run-up to the 2020 election when many members felt they had to act as defenders for Harris.

As the first Black and first South Asian woman to be nominated for vice president by either major party, Harris was a primary target in Washington and often faced an onslaught of racist and misogynistic harassment.

Members of the KHive tell Insider they have to be outspoken because of the historical significance of Harris's position.

Eric Chavous, the 31-year-old attorney behind one of the most popular KHive accounts @flywithkamala, told Insider: “She sits at the intersection of race and gender, which is the root cause of her unparalleled criticism. People are not used to seeing Black people with a seat at the table, but definitely not Black women.”

“The KHive has to work around the clock to overcome stereotypes surrounding Black women so that people can see the truth – that Kamala Harris has the experience and knowledge to lead the United States of America,” Chavous added.

The 31-year-old attorney became a supporter of the vice president in 2009 when he attended Howard University, Harris's alma mater.

He was also one of the first people who helped coin the term “KHive” back in 2017, which is loosely modeled on Beyoncé's equally fervent “Beyhive” (multiple KHive members also credited Twitter users Biana Delarosa and Elizabeth Blumberg for helping form the group).

Since Chavous first tweeted the hashtag, it has taken on a life of its own. Harris herself has addressed the group on multiple occasions and her husband and Second Gentleman Douglas Emhoff even identifies as a member of the #KHive in his Twitter biography.

But some members of Harris's digital army have also been accused of taking their loyalty too far.

Last year, a Huffington Post investigation found nearly a dozen people who said they had been threatened or harassed by some self-identified members of the KHive.

Multiple people told the Post their personal information had been published online after some fans instigated harassment campaigns against them for previously backing Democratic candidates other than Harris.

One person claimed they were forced to temporarily move their family to a different location for fear they were in physical danger, while two women claimed that KHive members even made veiled threats toward their children.

“People are ugly and disrespectful all over the internet. The KHive, in particular, simply wants to set the record straight,” Chavous said when asked by Insider about the allegations.

Chantay Berry, a 34-year-old graduate student at Brooklyn College and KHive member who has previously engaged in online arguments, admitted to Insider that the online world of politics can get toxic.

“Some of us do play a part in going back and forth with people. I don't start stuff, but like, you're not just going to bully me online either. It's just what the internet is,” Berry said. Supporters of Kamala Harris look on as she speaks during a “For the People” rally in Davenport, Iowa, on August 12, 2019.

In the past, KHive members have specifically targeted people who criticize Harris's record during her time as a prosecutor or have attacked her shift away from Sen. Bernie Sanders' “Medicare for all” bill.

Briahna Joy Gray, the press secretary for Sanders during the 2020 presidential primary, has accused the group of harassing her on multiple occasions.

“They're vicious,” she told the Los Angeles Times last month. She did not respond to Insider's request for comment.

But the group also aggressively targets right-wing outlets, like the New York Post, who have spent the last few 100 days frequently criticizing Harris on multiple issues, including immigration.

“We all know they're only attacking her because they know she's gonna be the president one day,” she added.

Berry told Insider that the KHive has no plans to go anywhere, especially considering Harris' increasing chances of becoming president in 2024.

“I think that now that she's in office, we're still all stans, but now we're all stans watching for the next four years, hoping that she becomes president,” she said.

VA to begin pilot programs to get COVID vaccines to all vets, spouses, caregivers