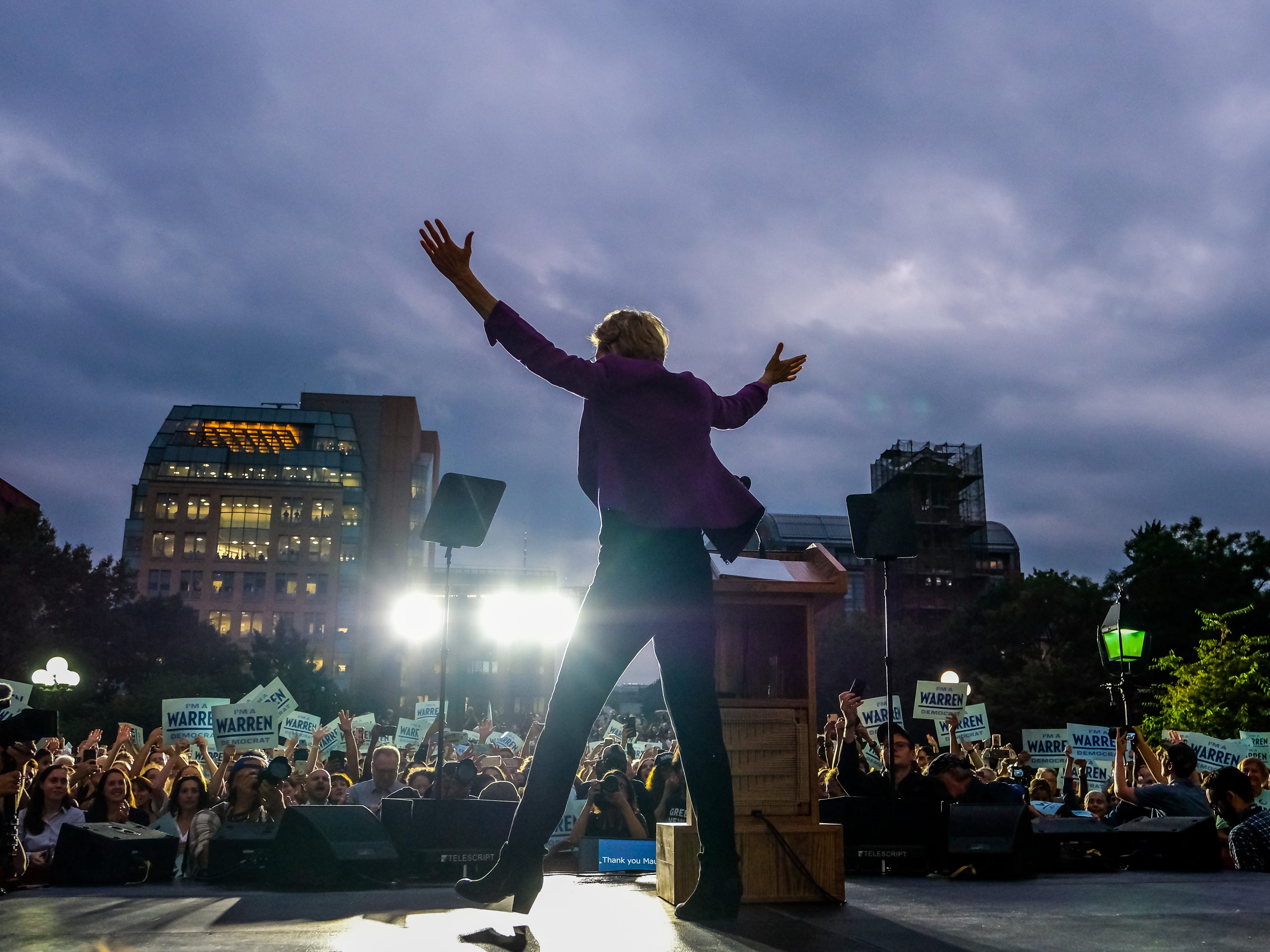 Sen. Warren reflects on her unsuccessful 2020 presidential bid in her upcoming book, “Persist.”
After entering the race to much fanfare, she was unable to translate that enthusiasm to votes.
“Maybe I just wasn't good enough to reassure the voters,” she wrote.
See more stories on Insider's business page.

A former professor at Harvard Law School, she was also the architect of the Consumer Financial Protection Bureau (CFPB), which was started under then-President Barack Obama in 2011 to oversee consumer protection in the financial sector.

After Warren was elected to the Senate from Massachusetts in 2012, defeating then-GOP Sen. Scott Brown, the presidential buzz immediately followed.

When Warren announced her candidacy in February 2019, she was seen as a Democrat who could win progressives and blue-collar Democrats with her populist economic message. After many rural voters abandoned former Secretary of State Hillary Clinton during the 2016 presidential election, Warren felt that robust economic plans on tax reform and proposals for tackling student loan debt would resonate with a wide swath of voters.

However, after disappointing showings in Iowa, New Hampshire, and South Carolina, she tried to turn her campaign around on Super Tuesday. It didn't work.

After Biden unexpectedly won the Massachusetts Democratic primary that day, with Warren securing a third-place finish in her home state, she soon exited the race.

Read more: Here's how Biden is reshaping gender and reproductive rights with policies that are even more progressive than past Democratic presidents

In Warren's upcoming book, “Persist,” set to be released on May 4, she reflects – quite candidly – on why her campaign failed to launch her into a one-on-one battle with former President Donald Trump for the White House.

“In this moment, against this president, in this field of candidates, maybe I just wasn't good enough to reassure the voters, to bring along the doubters, to embolden the hopeful,” Warren wrote.

She wrote that the possibility of this notion being true was “painful.”

For Warren, who has kept a somewhat low profile since Biden took office, the book reveals a chapter of her life that had the potential to make her the first female president in US history.

In the book, Warren points to questions about the cost of her health care overhaul as part of her downfall, as well as what she says were the lingering suspicions that plagued high-profile female candidates like 2010 Massachusetts Senate candidate Martha Coakley and Clinton.

“I had to run against the shadows of Martha and Hillary,” she said, suggesting that some voters may have been leery of nominating a woman to take on Trump.

Warren also said that with the dozens of policy proposals that were drafted during the campaign, there was a lot to juggle.

“It can be risky to learn on the run, particularly if some of that learning is happening in public,” she wrote.

While Warren takes time to tackle her loss in the book, as a sitting senator, she still wants to empower her ideas.

“This book is about the fight that lies ahead,” Warren emphasizes on the back of the book.

In the book, she also offers praise for former 2020 competitor Biden, describing him as a “steady, decent man,” as well as Independent Sen. Bernie Sanders of Vermont, whom she describes as “fearless and determined.”

Meet the KHive: Kamala Harris’ army of online fans who are fiercely loyal but can also turn nasty, critics say

The Far-Right Is Fueling Secession Fantasies Across the US