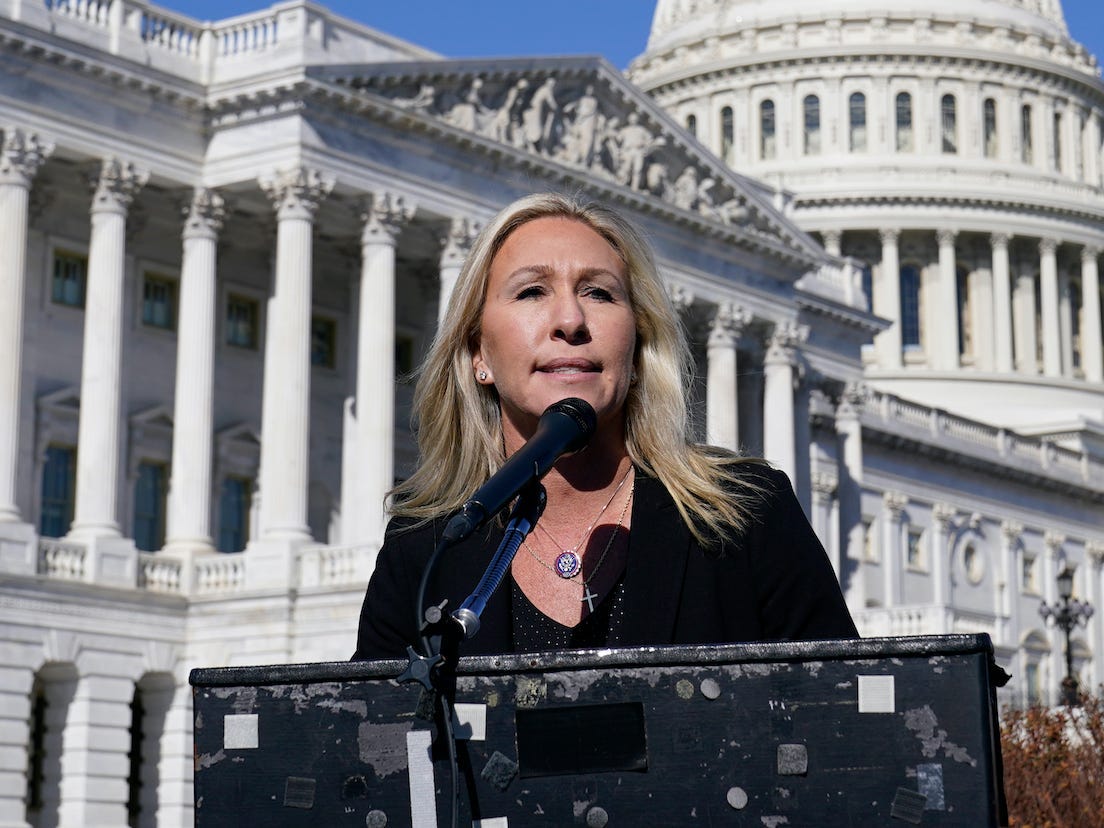 Rep. Marjorie Taylor Greene of Georgia speaks during a news conference on Capitol Hill on February 5, 2021.

Rep. Marjorie Taylor Greene of Georgia is holding a gun giveaway, saying she will gift an AR pistol to the winner of a lucky draw.
This is not the first firearm raffle Greene has held. She organized several draws in 2020, before the election.
The giveaway will go on even as the number of mass shootings in the US this year mounts.
See more stories on Insider's business page.

Georgia lawmaker Marjorie Taylor Greene is holding a gun giveaway, saying she will gift an AR-15 worth around $2,900 to the winner of a lucky draw.

Insider saw an email sent by Rep. Greene's campaign last Saturday, which proclaimed that the giveaway would go on for two more weeks.

“Joe Biden and Nancy Pelosi would love nothing more than to ban, confiscate, and destroy our gun rights through a flurry of 'executive orders.' This is the most vicious assault on our gun rights our country has seen in decades,” read the email.

“The radical left isn't just coming after me. They're coming after you. They're fighting for their America Last agenda every single day to plunge America into a socialist hellhole.”

In the email, Greene says she is the “biggest defender of gun rights in Congress,” and that she is “giving away the gun Joe Biden wants to ban” as part of her fight for Second Amendment rights.

“It's the same type of gun the hate-America gun-grabbers in DC would love to ban if they ever get the votes,” said the sign-up page for the firearm raffle.

The raffle is taking place even as the number of mass shootings in the US skyrockets, with gun violence seeing a marked resurgence.

At least 50 mass shootings have taken place in the country since eight people – including six Asian women – were killed in an Atlanta shooting spree on March 16. According to reports by the Gun Violence Archive, the US saw a total of 156 mass shootings in 34 different states and Washington DC, in the first 110 days of this year.

This is not the first gun raffle that Greene has held.

In October last year, the Justice Department's Bureau of Alcohol, Tobacco, Firearms, and Explosives (ATF) sent a cease-and-desist letter to Q, the manufacturer of the pistol. The ATF asked that Q stop manufacturing and selling the gun, as it fell under the category of a “short-barreled rifle” subject to regulations under the National Firearms Act.

On April 7, Biden announced a series of executive actions that his administration would take to address gun violence.

These include drafting model “red flag” laws, which will allow family members or friends to alert the authorities or apply for a court order to prevent someone from getting a gun if there is a reasonable belief that they could be a danger to themselves or others.

Biden also plans on tackling “ghost guns”, which are firearms that can be assembled at home using an assortment of parts.

Source: Marjorie Taylor Greene is holding another gun giveaway – despite there having been at least 156 mass shootings in the US since the start of the year

Putting Nuclear Bombers Back on 24-Hour Alert Would Exhaust the Force, General Says

Biden calls on Americans to get vaccinated, says he ’will not relent until we beat this virus’