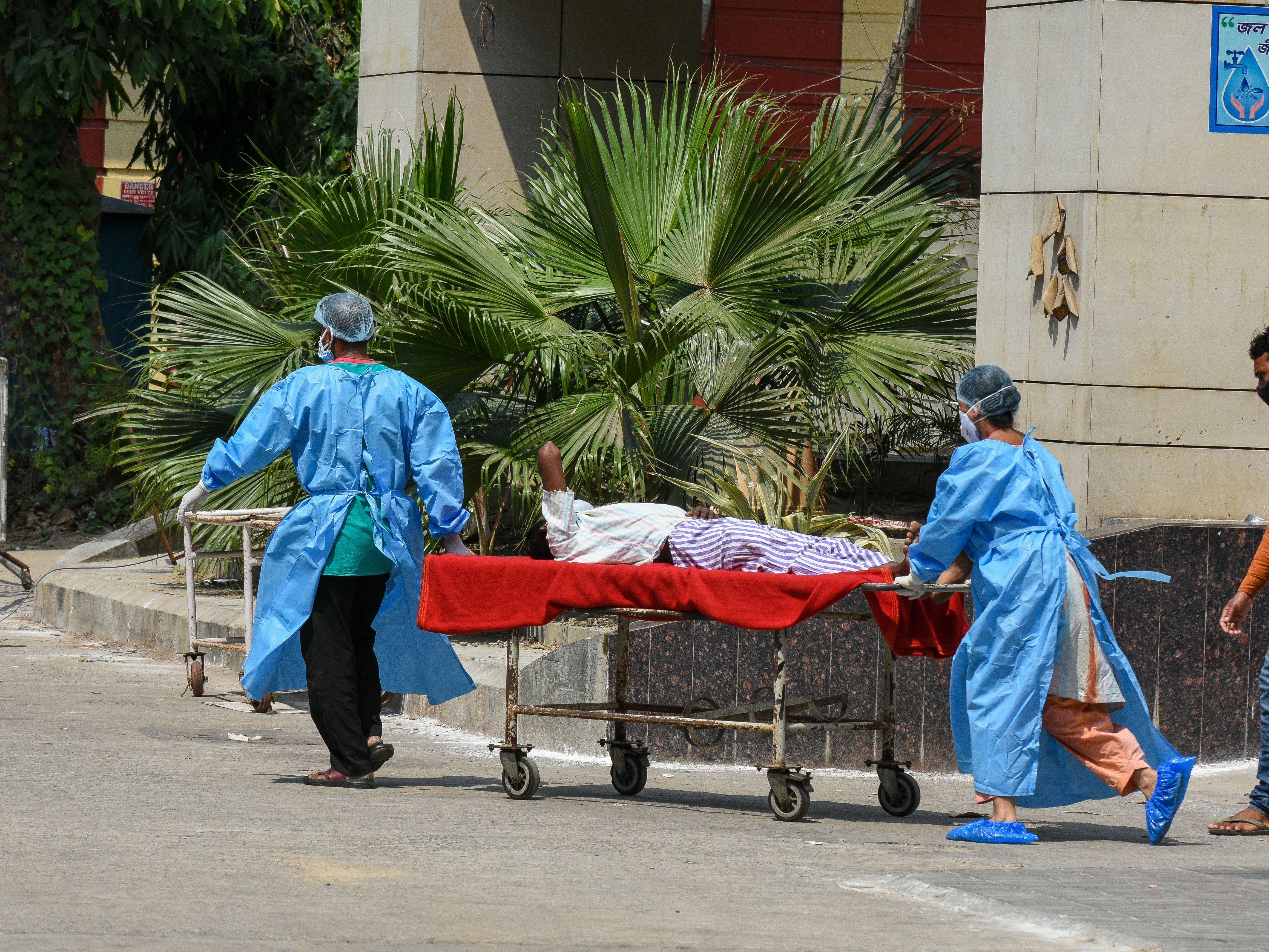 A patient being taken away for testing at a COVID-19 ward at a hospital in Kolkata, India, on Wednesday.

A second COVID-19 wave is devastating India, where a new “double mutant” virus variant emerged.
Insider spoke with people on the ground and experts about the threat and ways to address it.
Politicians so far have largely been unwilling or unable to apply strict restrictions.
See more stories on Insider's business page.

Hospitals in India are overwhelmed as the country grapples with a second wave of COVID-19.

There is a severe shortage of beds, the drug remdesivir, and medical oxygen. Desperate patients have been traveling hundreds of miles, searching helplines and social media, to find hospitals with enough capacity. The worsening situation forced British Prime Minister Boris Johnson this week to cancel a visit to the country. The UK and the US have also issued strong travel advisories for India.

On Saturday, when 261,394 new cases were reported in the country, Prime Minister Narendra Modi boasted about the size of his election rally in West Bengal, where a huge crowd was crammed together.

Rallies have taken place in West Bengal and three other states, with thousands attending, without much adherence to COVID-19 precautions.

This reflects how dramatic India's turnaround has been with the coronavirus. Early this year, experts hypothesized that this country of 1.3 billion people had reached herd immunity as cases steadily fell. The government's own modeling study suggested the country's outbreak would be over by February. In January, a health minister said India had “successfully contained” COVID-19.

Weddings, functions, and political rallies resumed as politicians encouraged a return to normal.

Now, India has more than 2 million known active cases, compared with 200,000 in January. Daily reported cases are three times as high as the peak of the first wave in September, with 314,835 announced on Thursday. 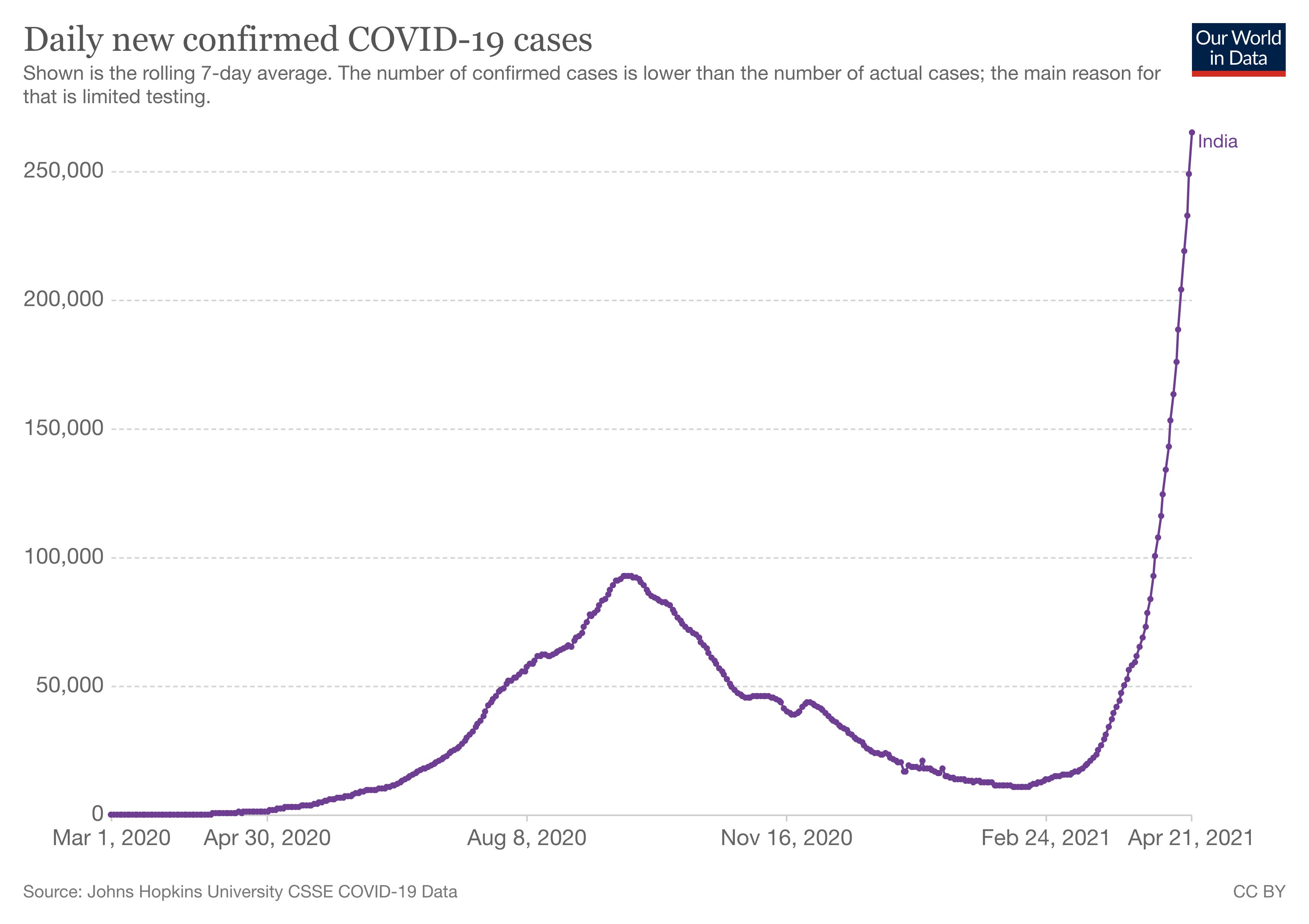 On Thursday, India announced it had recorded 314,835 coronavirus cases in 24 hours – a global record. This graph shows the seven-day average of daily cases rising in recent days, compared with the first wave last year.

Our World In Data

A “double mutant” variant – which contains notable mutations that had been separately identified in two previous variants of the original virus – has taken hold.

Insider spoke with people on the ground about the extent of devastation this wave has caused as well as the constant challenge of enforcing restrictions at mass gatherings.

“Things have worsened this time around,” said Dr. Sonali Vaid, who previously worked for the World Health Organization and is now helping patients find beds in New Delhi.

“Many patients with severely low oxygen-saturation levels have had to manage at home, some with dire consequences, due to lack of beds,” Vaid added. “Things weren't as bad last year.”

Despite this, the country's largest religious gathering went ahead. The centuries-old Kumbh Mela sees tens of millions of Hindu pilgrims travel to bathe en masse in rivers in a ritual meant to cleanse them of their sins. It has brought millions this month to Haridwar, north of Delhi.

“The flow and blessings of Ma Ganga” – Mother River Ganges – “will ensure that coronavirus does not spread,” said the chief minister of Uttarakhand, the northern state where the event is taking place for all of April.

The government shortened the event from four months to one and insisted it was following Health Ministry guidelines on containing the coronavirus – such as mandatory negative test results and discouraging older, more vulnerable people from taking part.

But Deepak Rawat, a government official who runs the event on behalf of the state government, said these were impossible to enforce during the days of Shahi Snan, or royal bath, when devotees bathe in the Ganges. 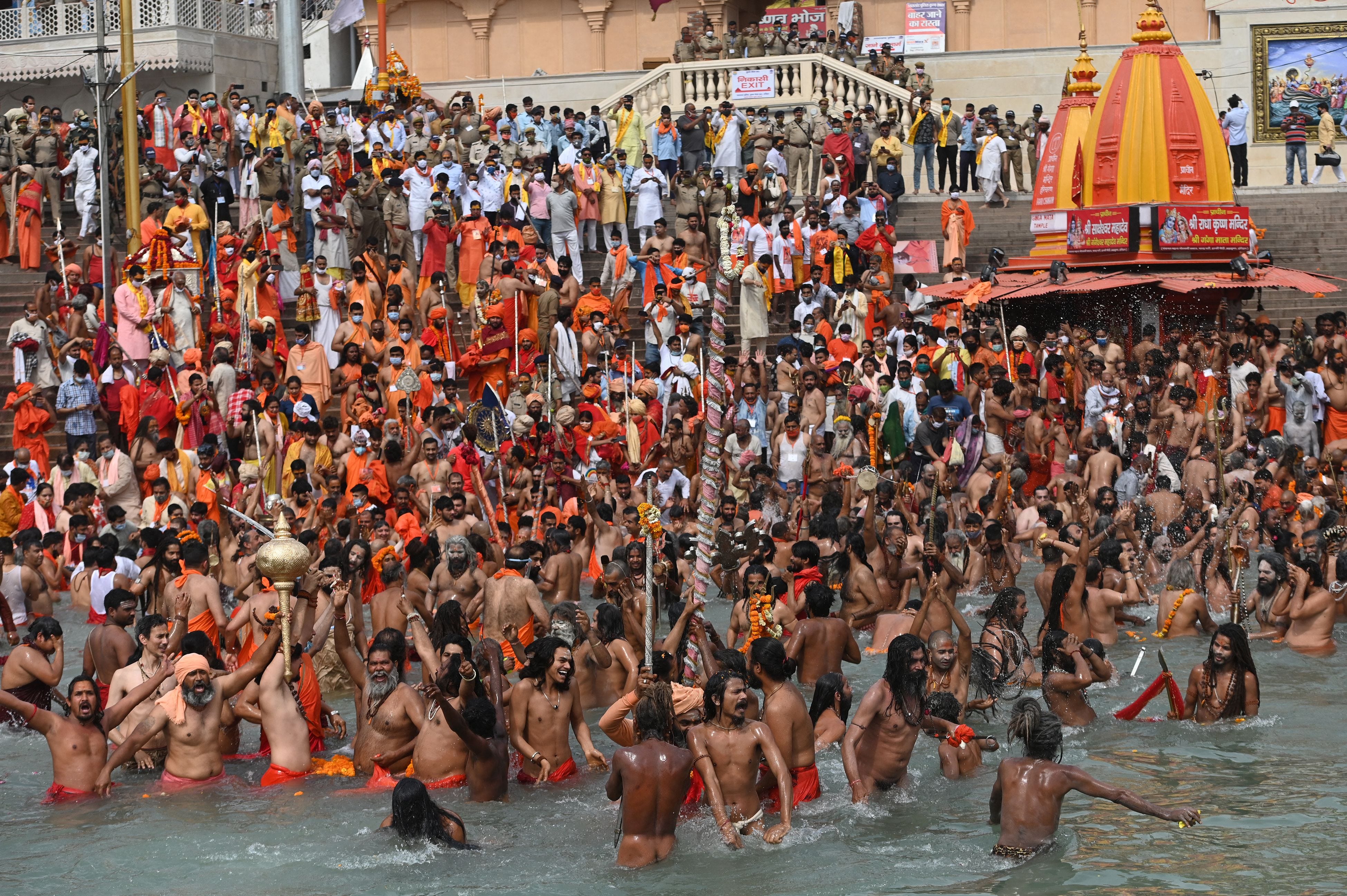 Naga Sadhus (Hindu holy men) taking a holy dip in the waters of the Ganges River on the day of Shahi Snan during the religious Kumbh Mela festival in Haridwar on April 12.

On a single day, an estimated 2.1 million pilgrims were taking part, most of them neither wearing masks nor socially distancing.

“Enforcing COVID-19-appropriate behavior during these processions would be a folly, and we would be risking a stampede,” Rawat told Insider.

A senior official at the festival told AFP on Friday that they had “around 2,000 positive cases” in the previous four days. That week a senior priest was taken to a hospital from the site and died after a positive test.

Facing a backlash, Modi later tweeted appealing for the Kumbh Mela to be scaled back.

Dr. T. Sundararaman, the global coordinator for the health-activism network People's Health Movement, said the Kumbh Mela should have been restricted in line with religious ceremonies elsewhere like the annual Islamic pilgrimage to Mecca.

“What you now have is a runaway celebration with a great potential to act as a superspreader event,” he added.

In Lucknow, the capital of Uttar Pradesh, which neighbors Uttarakhand to the south, videos emerged of crematoriums full of rows of burning pyres, raising fears official figures were missing many who were dying without having been tested.

The double-mutant variant of the virus that emerged in the country, B.1.617, may be behind the surge in cases.

Authorities don't yet have the data to prove this, though the variant has mutations that were found in others to make them more transmissible and less likely to confer immunity on people who recover, said Gautam Menon, a physics and biology professor at Ashoka University.

“This wave is far more transmissible than the first one,” said Dr. Lancelot Pinto, a consultant in respiratory medicine at P. D. Hinduja Hospital in Mumbai, which was badly hit during both waves.

During the first wave, it was common for only one or two members in a family to be infected, but Pinto said he was seeing entire families testing positive now.

“We are getting many younger patients – those in their 30s and 40s – with moderate to severe disease,” he said, adding: “This could be because of the new strain or just because of the sheer numbers of infection this time.” 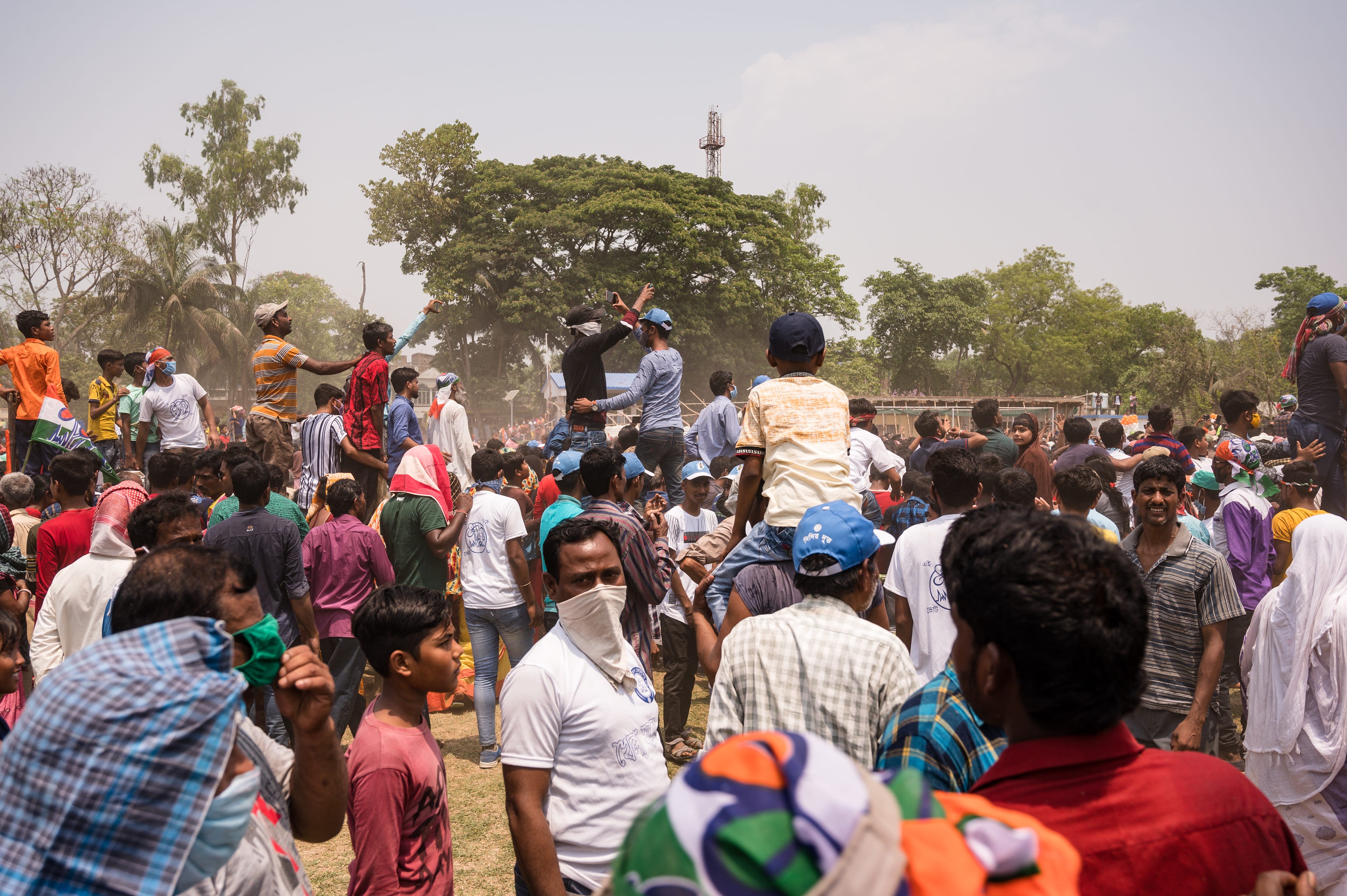 A political meeting at Shyamnagar Village, Tehatta, West Bengal, India, on Sunday. Two political parties have stopped holding rallies in the state because of COVID-19.

Vaccination has offered other countries a glimmer of hope, but while India has been able to vaccinate millions of people in a single day, only about 8% of its enormous population have had a first dose so far.

At its current pace, India would not vaccinate 70% of its people until December. It has authorized Russia's Sputnik V for use, amid severe shortages of Covishield and Covaxin, which are made domestically.

Two political parties campaigning in West Bengal have called off rallies, while Modi's Bharatiya Janata Party decided this week to limit its rallies to 500 people, two days after the prime minister boasted about the size of his crowds. The Kumbh Mela is continuing until the end of the month.

In a Tuesday public address, Modi said lockdowns should be only a “last resort” because of the damage they would do to workers' livelihoods. He said making everyone over 18 eligible for vaccination starting in May would ensure laborers were inoculated sooner.

He asked states to focus instead on containing specific sites of outbreaks.

Delhi began a weeklong lockdown on Monday – closing businesses and ordering people to travel only for essential reasons – saying the city's health system had reached a “tipping point.” Maharashtra, the worst-affected state, is severely restricting travel until the end of the month.

Dr. Srinath Reddy, the president of the Public Health Foundation of India, who sits on national committees on COVID-19 management, said that for six weeks the country should ban gatherings of more than five people and require masks to be worn outdoors – the type of measures the country eschewed when it thought it was all over.

’I thought I would die.’ Myanmar protesters describe torture they suffered in detention

’Even prisoners get fresh air’: Inside Australia’s hotel quarantine system