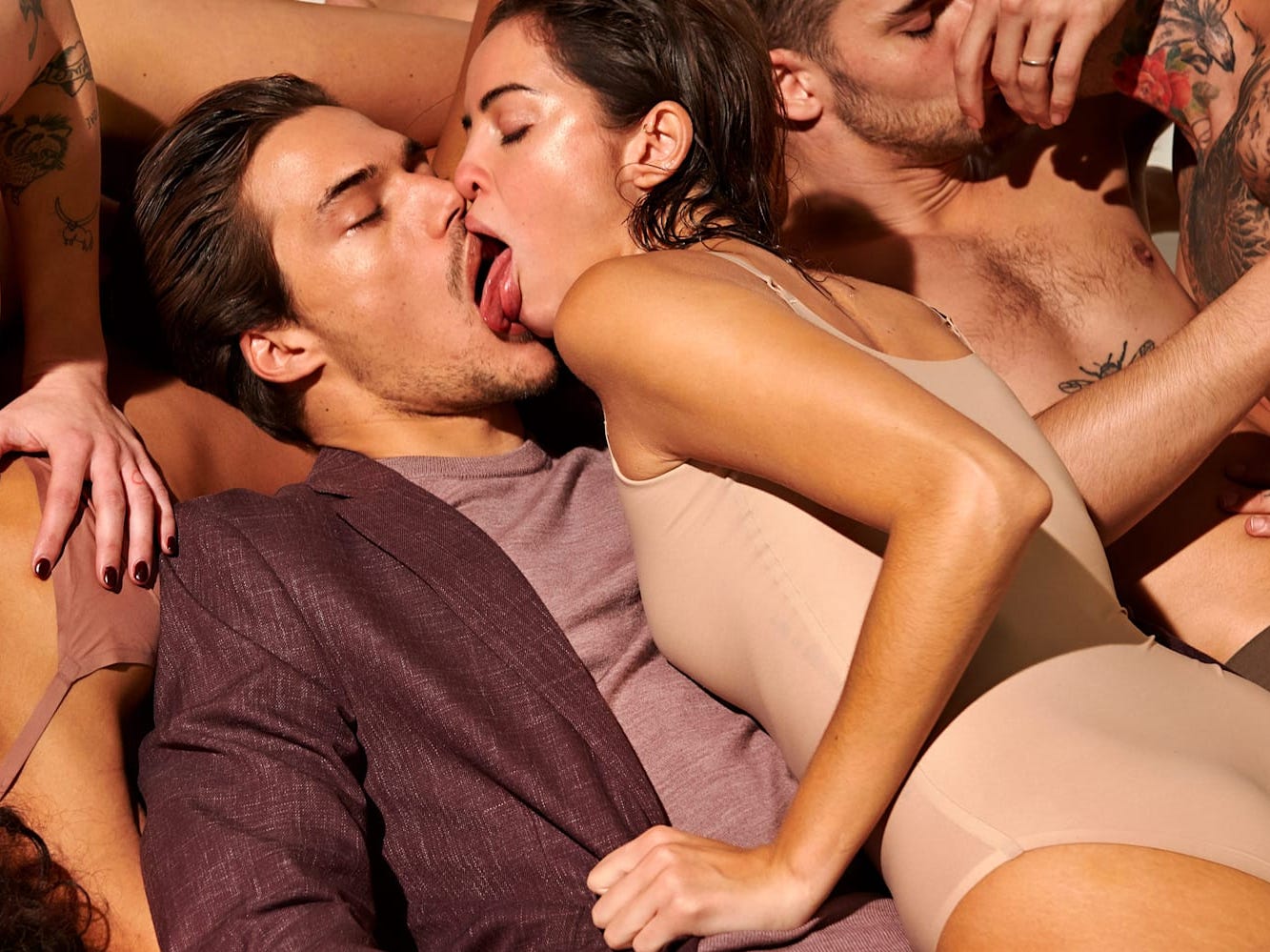 As vaccines roll out, companies are tapping into pent-up demand after a difficult, lonely year.
Sexy ad campaigns are on the rise, with Suitsupply promising a “new normal” full of swapping spit.
“Making out” in ads has seen a 165% increase in click-through rates so far in 2021.
See more stories on Insider's business page.

It started with Suitsupply.

A different Suitsupply ad showed a glistening woman licking a man's similarly shiny face, a long strand of spit dripping down from her tongue. Both images advertised the same promise: “The new normal is coming.”

“Social distancing for extraordinarily long periods of time has conditioned us to fear proximity of others and that is perfectly justified,” de Jong continued. “The campaign is simply a positive outlook on our future where people can get back to gathering and getting close.”

As vaccines roll out and safety precautions roll back, people across the US are about to unleash a wave of pent-up energy, returning to restaurants, socializing indoors, and having sex with new people. And, Suitsupply is far from the only company trying to cash in on customers who have been starved for physical contact.

Diesel recently debuted a campaign titled “When Together,” showing couples engaged in various forms of intimacy, including numerous shots of people making out in bed. Urban Outfitters executives said in a recent earnings call that the company has seen a “striking change” in shopping habits, with more people buying dresses and “going out-type apparel.” Hooters CEO Sal Melilli told Insider the chain is seeing pent-up demand from people who haven't been able or willing to watch sports or eat inside for months.

“The more people are vaccinated, the more – I'm hoping – that behaviors change, and people will feel more comfortable going out … to actually do something with other people,” Christina Boni, Moody's senior vice president, told Insider.

These outings, Boni said, will spark a wave of shopping, as people ditch their cozy pandemic outfits and home improvement projects for a new era of purchases. A year of pent-up demand is about to be released, as people finally do everything they could not in 2020.

Sex is selling again, and racy ads will soon be 'off the wall'

Ads featuring people “making out” have seen a 165% increase in click-through rates – which measure customer engagement – so far in 2021, according to data from artificial intelligence ad company Pattern89.

Pattern89 CEO RJ Talyor told Insider that, until recently, featuring a group of people in an ad could lead to a barrage of customer comments about social distancing. Now, the US can expect to see a return of intimacy in advertising, whether that be in the form of friends gathering or couples getting frisky.

“We've already seen it since the beginning of the year – a giant spike in the utilization of people in intimate photos, more people coming back into the same frame, kissing, hugging, hand-holding, and small gatherings,” Talyor said.

Talyor said that, soon, a switch will be flipped and sexy, aspirational ads will be back in full force.

“That Suitsupply ad and then others kind of have opened the floodgates,” Talyor said. “I think marketers were like, wait, we can advertise future state now? Let's go!”

Sameera Razak, the founder of The Directory, a creative bureau focused on inclusive marketing, said the rise of racy ads is set to be “off the wall.” But, the wave of unbridled horniness comes with its own risks, whether that be in terms of brands' reputation or simply keeping items in stock.

“There is definitely going to be this sort of '20s extravagance, but the question is going to be: How much are brands going to buck it and give back … to almost offset that opulence?” Razak said.

'Who gets to party?'

Victoria's Secret is one famously “sexy” brand that has been updating its marketing in recent years. This is what the brand's website looked like in early March.

Marketing purely centered on sex and excitement for a return to “normal” could spark new forms of backlash.

Talyor said that marketers still need to test the waters as they figure out which types of intimacy people are comfortable seeing in ads. Razak said that in light of the pandemic, everything remains heightened, especially in light of unequal access of the vaccine linked to wealth and race.

“Who gets to party? Who gets to hang out?” Razak said. “It opens doors that – I don't know if all companies will be willing to do that right now.”

“It can't be a free for all, like, let's go to Coachella,” Talyor said.

Issues of race and social justice are especially fraught. Last summer, many companies faced public reckonings over corporate diversity and racial injustice. One year later, advertisers will be forced to prove if they are committed to change or if they relied on short-term, surface level fixes.

If companies want to cash in on pent-up excitement, they need to represent a diverse array of customers. But, if they failed to meaningfully adjust long-term strategies and instead are seen as diversifying ads out of fear of backlash, Razak said, it could read like a sexy college diversity brochure. 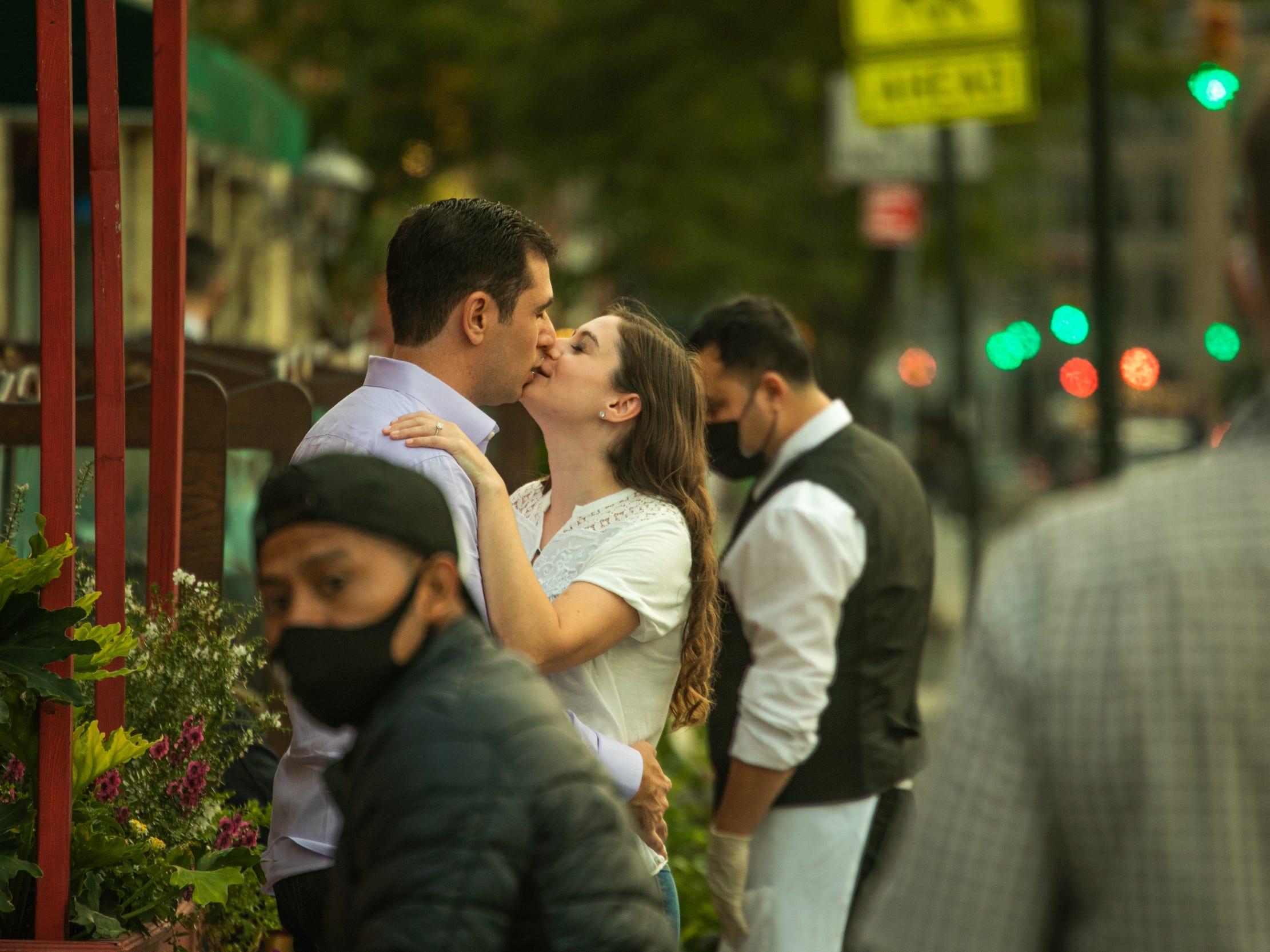 2021's version of socializing and sexiness will look different than past years.

The US is entering uncharted territory. We know there is pent-up demand for human contact. But, we do not know exactly what that contact looks like in a post-pandemic world.

Talyor predicts that, while intimacy is returning, we won't see scenes like nightclubs or crowded bars in ads any time soon. Instead, we can expect to see more marketing featuring park dates and outdoor movie nights.

Boni said that there is still uncertainty around what, exactly, people are looking to buy as they return to the office, take vacations, and socialize in person. The last year proved the importance of inventory management for retailers that were stuck with unsold products when shopping patterns radically changed. In 2021, companies will likely avoid taking any big risks in terms of trends.

“There's no demand patterns to look at,” Boni said. “There's no precedent. They will obviously want to make sure that they're better positioned and that they have more stock, but they're not going to make big bets.”

In other words, if you want a trendy sundress this summer and spot one that is available, Boni says she would “recommend buying the dress quickly, because there probably won't be enough of them.”

While the future is still murky, there is good reason to believe companies that can meet pent-up demand linked to socializing and sex will be able to cash in. The National Retail Federation said in late February it anticipates retail sales will grow between 6.5% and 8.2% in 2021, reaching more than $4.33 trillion, due in large part to the COVID-19 vaccination roll out.

Hayne added: “The exact timing is hard to predict, but we believe it will coincide with spring weather.”

High design: Seth Rogen is bringing his cannabis home goods to the US

Plans for an in-person MWC continue as Sony, Nokia and Ericsson bow out

Too Much Online Shopping? These Apps Can Earn You More Than $2,000 Back.

35 Products For Anyone Who Absolutely Detests Feeling Messy

After all is said and done, more is said than done

The world’s ’coolest’ street revealed by Time Out