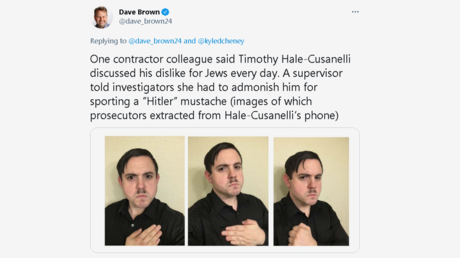 Army reservist and former Navy contractor Timothy Hale-Cusanelli, charged in the US Capitol riot probe, has been described as a Nazi sympathizer and was reportedly reprimanded by a supervisor for having a “Hitler mustache.”

Hale-Cusanelli was arrested on January 15 as part of an ever-expanding investigation into the Capitol riot, which is on course to become the largest investigation in the history of the country.

One contractor colleague said Timothy Hale-Cusanelli discussed his dislike for Jews every day. A supervisor told investigators she had to admonish him for sporting a “Hitler“ mustache (images of which prosecutors extracted from Hale-Cusanelli’s phone) pic.twitter.com/v73fi6qtUY

The man, who worked as a security contractor at Naval Weapons Station (NWS) Earle in New Jersey at the time of his arrest, has been accused of entering the Capitol to disrupt the certification of US electoral votes on January 6 and a litany of other charges, related to him breaching the Capitol grounds. Hoping to secure a pretrial release, Hale-Cusanelli filed a motion earlier this month, asking the court to grant him conditional release, with his defense arguing that Hale-Cusanelli is not prone to violence. 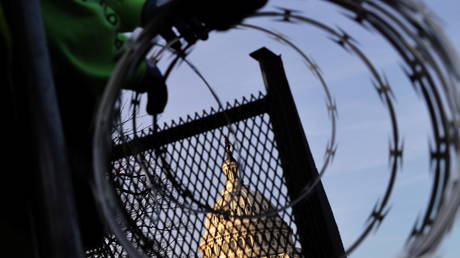 The prosecution challenged the motion, citing multiple accounts by his co-workers at the base that Hale-Cusanelli harbored anti-Semitic and white supremacist views. Citing accounts by as many as 34 people who were interviewed as part of the Navy’s own investigation into the contractor, the prosecutors said that Hale-Cusanelli had “extremist or radical views pertaining to the Jewish people, minorities, and women.”

For instance, the prosecution cited a Navy seaman recalling that Hale-Cusanelli suggested that “babies born with any deformities or disabilities should be shot in the forehead,” while a Navy petty officer told investigators that Hale-Cusanelli often talked about Jews, saying that “Hitler should have finished the job.”

According to the accounts of those who knew Hale-Cusanelli, the contractor did not bother concealing his anti-Semitic and pro-Nazi views, and sported a ‘Hitler mustache’ at work. A supervisor at the base told the Navy investigator that he once reprimanded Hale-Cusanelli for wearing his facial hair in this fashion, which strongly resembled Hitler’s mustache. 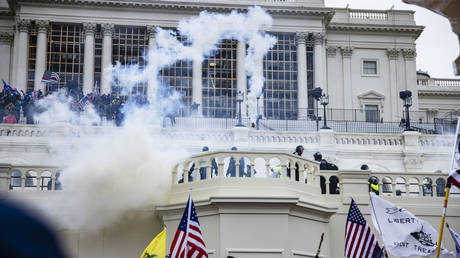 ‘Largest investigation in American history’: 100+ people to be charged in storming of US Capitol, court filings say

While Hale-Cusanelli confessed to the FBI that he took part in the riot, he denied having anti-Semitic or neo-Nazi beliefs. His lawyer Jonathan Zucker argued that the man’s crime of entering the Capitol building amounts to “trespass” since he did not engage in violence or destruction of property. “He never assaulted nor threatened anyone,” Zucker said in the filing. 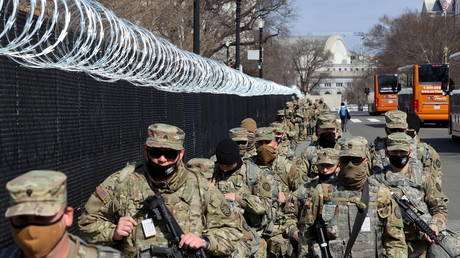 Pentagon says 2,300 National Guard troops to stay at Capitol through May 23 as post-riot review calls for increased security

Some 300 people have already been charged in connection with the storming of the Capitol, and at least another 100 are expected to face charges with a variety of crimes, according to court filings, reported earlier by the media. Some 900 search warrants have been executed since the incident on January 6, which the Biden administration used as a pretext to ramp up security around the Capitol. Thousands of soldiers have been deployed to Washington, and fencing was erected around the Capitol, prompting comparisons with Kabul in war-ravaged Afghanistan. Last week, the Pentagon said that some 2,300 National Guard troops would assist the Capitol Police through late May despite claims by some lawmakers that there is no acute threat to warrant such reinforcement.

UFOs Are ’Real,’ and the US Needs Answers, Former Military Officials Say

All veterans, their spouses and caregivers eligible to get COVID vaccine through VA under newly-passed bill

Cheetah attacks a keeper at an Ohio zoo