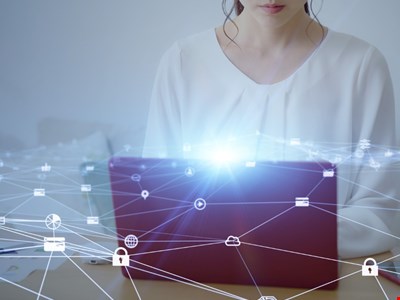 More than half of Americans believe that their companies could have done more to increase cybersecurity during the global health pandemic, according to a new survey.

In February, tech company Lynx Software asked 1,000 Americans employed during the pandemic about their employer's approach to cybersecurity since the outbreak of COVID-19. Of those surveyed, 51% said that their companies have not been taking cybersecurity seriously.

Nearly half (48%) said that they were not aware of their company's implementing any strict IT security policies since the novel coronavirus took hold.

Just under two-thirds (60%) said that they had not been prohibited from using certain tools or apps that fell short of high security standards.

The survey also revealed that companies have been relaxed regarding device use, with 65% of survey respondents saying that their company allows them to use their work computer to access personal services. Three-quarters (76%) said they use a personal device for work at least sometimes.

Asked how to describe their experience of cyber-attacks during the pandemic, nearly 4 in 10 (36%) respondents said that they have been, or that they know someone who has been, impacted by a cybersecurity attack since the start of COVID-19.

A large majority of respondents (69%) indicated that they are more concerned about cybersecurity risks during COVID-19 than they were before the pandemic, as perimeter-based security is no longer possible.

Fewer than half (49%) of respondents said that the cybersecurity at the organization had been strengthened since the pandemic began.

Asked to name their biggest cybersecurity concern, 54% of respondents said that their main worry was that their personal data would be compromised.

“Organizations of all types need to prioritize finding ways to secure end-points for their employees’ devices, whether they are on laptops, edge servers or anything between, especially in the remote, zero-trust environment we are living in. For IT teams this doesn’t have to mean prohibitive costs or compromising performance,” said Arun Subbarao, vice president of engineering and technology at Lynx Software.

“At Lynx, we endorse increased security awareness for IT in order to combat risks that have come as a result of people’s increasingly virtual lifestyles since COVID-19.”