When a Myanmar nun fell to her knees at a protest against the coup, pleading with police who then joined her in a brief prayer, she had no idea the image would become one of the most famous photos of the nationwide revolt.

Sister Ann Rose Nu Tawng said the two policemen kneeling with her on March 8 in the northern city of Myitkyina expressed remorse for their role in the violent suppression of the protests, which erupted across the country after the military seized power on Feb. 1, ending a decade of democracy.

Myitkyina is the capital of Kachin state, where most of Buddhist-majority Myanmar’s Christian community lives. The Catholic nun said she believes in the humanity of individuals in the ranks of the police and military. “There might be many good guys among them. I don’t hate them, I also love them,” she told VICE World News. “But they need to think about whether their actions are right or wrong.”

On that terrifying day last week, Sister Ann Rose was working at a local clinic when she heard cries for help. At around 10am, people were streaming into the clinic pursued by police.

She went outside as authorities started violently dispersing protesters, firing live rounds and arresting people. That’s when she knelt down in front of police officers near her, who in turn did the same.

“They apologized to me and said that it was their duty to arrest protesters and that they have to do it. At this point we were just pleading to each other,” the 45-year-old said.

But the intervention did not stop the onslaught. The situation deteriorated, with protesters needing urgent medical attention.

“Our clinic became like a sea of blood because everyone was bleeding. I saw someone collapse in front of me after I heard gunfire. First I thought he collapsed from tear gas. But then I saw his head was busted open,” she said.

“Then I started asking for help. My eyes couldn’t open because of the teargas. Then people carried him into the church. I saw people crying and running around. I never thought that they would be that cruel. I thought they would only use rubber bullets.”

“Our clinic became like a sea of blood because everyone was bleeding. I saw someone collapse in front of me after I heard gunfire. First I thought he collapsed from tear gas. But then I saw his head was busted open.”

Though two people were reportedly killed, she believes the security forces she pleaded with did not fire on the crowd. “It must have been those police or soldiers who didn’t meet me who killed them,” she said. But she also had a message for demonstrators who don’t stand a chance against the firepower of the state.

The death toll from the crackdown on protests surged to least 120 over the weekend. Many of the dead have been shot in the head at protests, while some have been tortured to death after being detained, according to rights groups.

Conflict has been a part of Sister Ann Rose’s life for years. Growing up in northern Shan state, which is next to Kachin, she has had to flee ongoing clashes between the military and ethnic armed groups several times. More recently, she has helped internally displaced people in a hospital in Kachin state. But the nationwide revolt has brought her closer to the front lines of a new kind of fight.

“I was used to escaping war, but now I am in the middle of it,” she said.

Referring to protesters as her “children,” she said she considers everyone in Myanmar her family member. “I don’t know politics and news, but I know that they are in trouble.”

“I was used to escaping war, but now I am in the middle of it.”

Myanmar’s military is notorious for its violence against civilians, especially in ethnic minority areas. In 2017, it carried out what the United Nations said was a genocide against Rohingya Muslims in Rakhine state.

What makes the crackdown against youth pro-democracy forces so different is how much it is playing out in livestreams and instantly viral social media posts. Soldiers and police have been caught on camera savagely beating protesters, shooting live rounds into crowds, and celebrating after mowing down demonstrators. Supporters have even taken to TikTok to incite violence in videos that the platform vowed to take down. 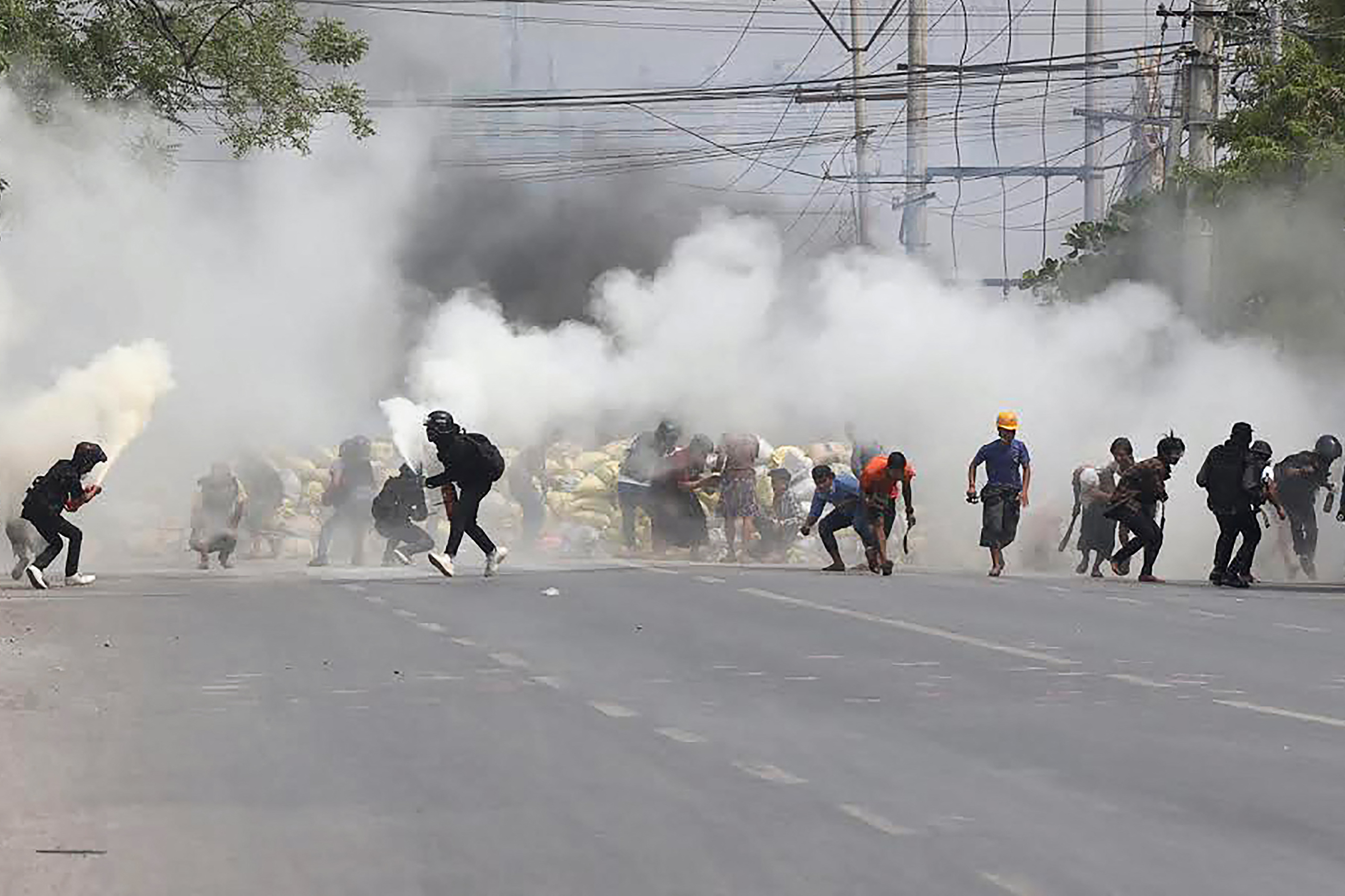 Protesters run from tear gas fired by security forces, as some demonstrators also let off fire extinguishers, next to a barricade set up during the demonstration against the military coup in Mandalay on March 15, 2021. Photo: STR / AFP

Some experts hope a rift within the military, caused by generals disgruntled by commander-in-chief Min Aung Hlaing’s coup, could create a pathway out of the stalemate. Early on in the protests, police were seen defecting from their ranks while facing protesters on the other side of the frontline, welcoming them with hugs. Last week, several police fled over the border to India, saying they had refused to follow orders to arrest or shoot peaceful protesters.

Online media outlet Myanmar Now has reported that 12 soldiers recently defected from the military and turned themselves over to the Karen National Union (KNU), an ethnic armed organization that has been battling the Tatmadaw for decades. Photos show some of them flashing the three-finger salute, signaling solidarity with the resistance.

Sister Ann Rose wants to appeal to the consciences of the security forces deployed to crush Myanmar’s pro-democracy movement. She said they still have a choice.

“They shouldn’t just be following the orders…they shouldn’t be firing guns or beating people. Guns are for firing at the enemy. People are not their enemy.”

Source: The Story Behind Myanmar’s Most Famous Protest Photo

Why Do A Bunch Of Nigerian Twitter Influencers Want This Alleged Money Launderer To Go Free? They’re Being Paid.