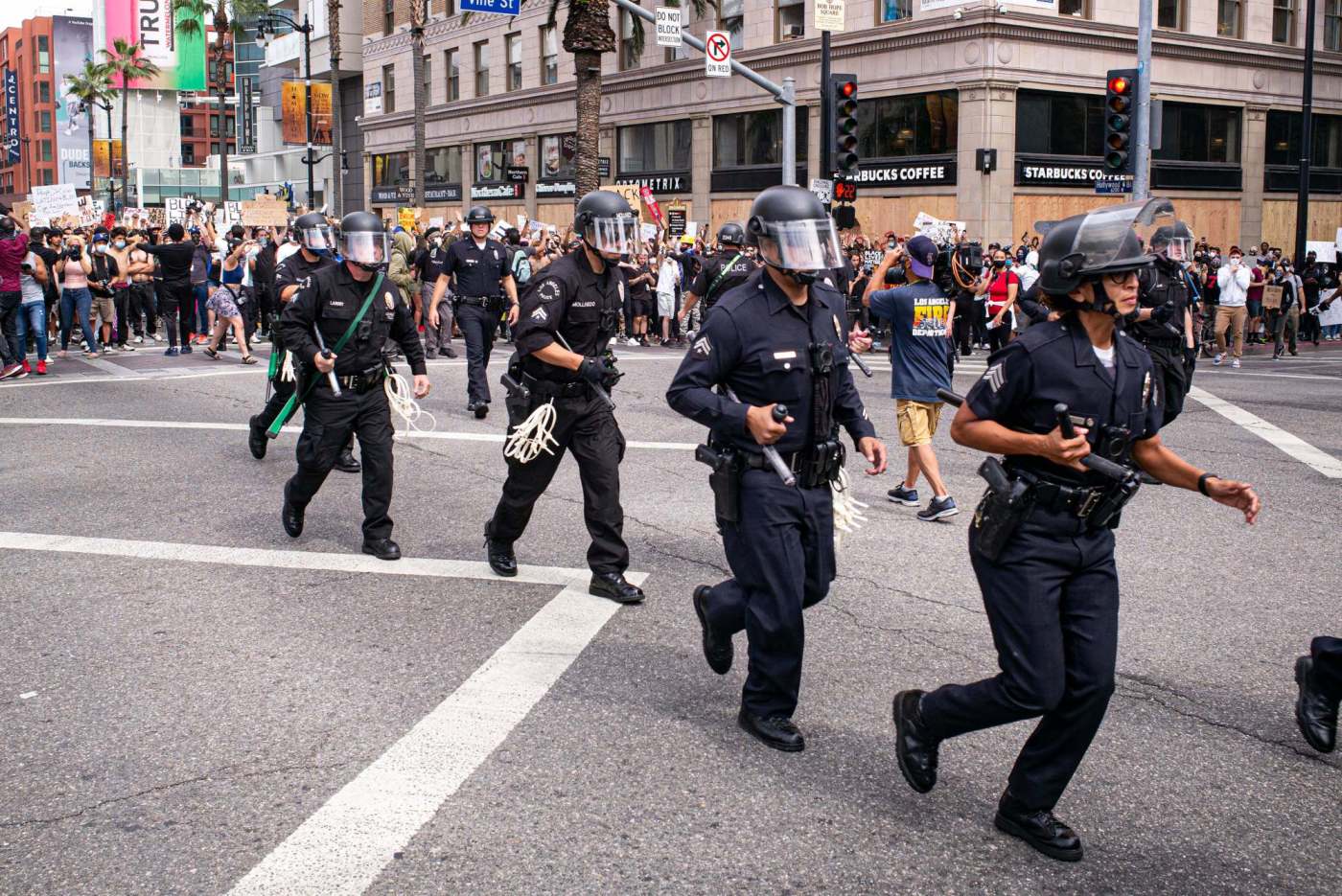 Los Angeles Police Department officers deployed to manage civil unrest sparked last summer by the death of George Floyd lacked sufficient training in less-lethal weapons used and arrested people for infractions even though they should have been cited and released instead, according to a report prepared by a team of former LAPD officers and other law enforcement officials.

The 101-page report, released Wednesday, March 10, found that many officers were not properly trained in crowd-control tactics and created chaos by issuing conflicting orders in response to the protests, which began May 27 and lasted several weeks. Also, officers employed a “significant amount” of less-lethal tools, including batons, bean bag shotguns and 37mm and 40mm foam-projectile launchers, which some officers were not properly trained to use, the report said.

The review team that prepared the report was led by Gerald Chaleff, a former member of the LAPD command staff, and a former president of the L.A. Police Commission. It was prepared at the request of the City Council.

Chaleff’s team also detailed law enforcement mistakes that appeared to repeat problems that had surfaced at past protests — including Occupy LA in 2011 and demonstrations sparked by the 2014 death of Michael Brown in Ferguson, Missouri — the only difference being that this time, it all happened “in the middle of a public health crisis.”

“The LAPD has not corrected the issues related to detention and arrests identified in the 2011 Occupy LA and the 2014 Ferguson protests,” the report said. “Those lawsuit settlements regarding arrest problems resulted in the City paying over $3,000,000.”

The LAPD released a statement saying department officials “will provide comments once we have had an opportunity to carefully review the report in its entirety,” while also outlining recent training protocols. “After the events of the summer, intensive crowd management and crowd control training was provided to nearly 4,200 personnel, including instruction on interaction with the media. Additionally, to date, over 7,500 officers have received command and control training,” the statement says. “Following the implementation of the added training, the department successfully managed significant demonstrations and protests approaching and during the national elections and as well as leading up to and on the presidential inauguration. We will continue to look at lessons learned and make efforts to ensure people are able to express themselves safely.”

The team also found there was not enough planning done ahead the LAPD’s response the protests, which resulted in the arrests 4,000 people and led to people being detained for “exceedingly long periods of time.” Many were handcuffed for hours, the report said, and were left without water or bathroom breaks.

“This occurred during the worst pandemic in 100 years and subjected those arrested, and officers providing security, to be in close proximity to one another for extended periods of time with the possibility of becoming infected with COVID-19,” the report said. Partly to blame was officers’ inability to find buses to transport people arrested.

According to the report, many protesters were arrested for a “failure to obey a lawful order of a police officer,” an infraction that “only requires the arrestee to provide proof of identification and sign a promise to appear, in order to be released.” But even when others were arrested for a curfew violation — a misdemeanor that does allow for arrest — “the unreasonable delays and failure to provide access to bathroom facilities and water remained a problem.”

The department also did not set up an incident command center to oversee the protests that spread citywide. Officers appeared to have been caught off-guard by the widespread scale of the protests, which initially began in downtown Los Angeles where, over two days, protesters entered and shut down freeways for a brief period.

“In interviews with the Review Team, interviewees said they were surprised at the violence that occurred in the afternoon and evening hours at some protests,” the report said. “They had believed that the good relationships which had been developed with various communities would cause any protests to be peaceful, as they had been in the past.

Other problems identified by the team included a lack of a “clear chain of command” at times. The report said that at times, command staff who showed up at a protest “issued orders without coordination with the incident commander, who was supposed to be in charge of the entire police response to a protest. This created confusion. Multiple command staff officers gave orders, sometimes conflicting, regarding the same protest.”

“Members of the LAPD command staff confirmed that they did not always know who was in charge, which led to a chaos of command,” the report said.

The department also seemed to have been caught off-guard by the widespread scale of the protests, which initially began in downtown L.A. where, over two days, protesters entered and shutdown freeways for a brief period. The protests later spread to the westside and the San Fernando Valley.

Instead of setting up a proper area command structure, the report said, the burden of managing the protest was placed on the Central Bureau, based in downtown Los Angeles, that was ”juggling the needs” of responding to incidents in its own area and “the department’s needs citywide.”

During the protests, officers were also subjected to violence, with 106 officers reported injured. More than 140 LAPD patrol cars were also damaged.

The morale of officers, and their trust in the department’s leadership also suffered, the report said. In response to a survey by the L.A. Police Protective League, the union representing nearly 10,000 rank-and-file officers, officers said they “did not feel supported by their leadership, the mayor, board of police commissioners, or the City Council. This is a problem that all involved must consider and try to solve.”

In response to the report, the board for the police union issued a statement saying that the report “echoes the response we received from a member survey conducted after this summer’s civil unrest.”

“Our members clearly stated that we were understaffed, poorly equipped and that there was neither a clear mission nor strong command presence while officers grew fatigued from working excessively long hours to restore peace and protect the safety of everyone during the protests,” the statement said. “Our officers were physically attacked and many injured while being asked to perform an exceptionally difficult job under the most strenuous circumstances imaginable.”

Even though it was hard to predict the “level of violence, looting, and arson that overwhelmed portions of Los Angeles,” their members should have gotten the “necessary support and resources to address the violence and keep them safe.”

The report offers up 22 recommendations. Among them: Create a “high-level executive position (sworn or civilian) with appropriate support staff within the Department to serve as a ‘Strategic Emergency Manager.’”

This manager would need to have expertise in “all-hazards emergency management, public order policing, large scale incident management, intelligence/information gathering and dissemination, use of force, use of less lethal tools, and analysis of current events as they present a challenge to policing operations.”

The report, one of three reports that was expected in the aftermath of last year’s protests examining the department’s response, added that the team’s findings do not “excuse the behavior of those who used the protests as an opportunity to commit criminal acts or those protesting who got caught up in the violence or hostility. But it does recognize that, despite the provocations, the police must be able to effectively address those who are committing criminal acts and causing disruption.”

The report added: “One of the fundamental duties of policing is to protect the First Amendment right to free speech, assembly and the right to petition the government for redress of grievances. The shift in protest dynamics seen in many cities including Los Angeles in 2020, makes protecting First Amendment rights more complex. Traditional crowd management techniques and tactics seem ill-equipped to handle this new trend.”

Mayor Eric Garcetti said he welcomed the report and “its important analysis and recommendations” and was looking “forward to working with the Police Commission, City Council, the LAPD, and community stakeholders in implementing improvements suggested in this report and the two reports coming shortly.”

Councilman Mike Bonin, who was among those who called for this review, described the report as “disturbing,” and said it showed the LAPD “hasn’t learned from its past & was unprepared for 2020’s demonstrations.”

Councilwoman Monica Rodriguez, who pushed for one of the other two reports to be prepared, said that as Public Safety Committee chair she intends to “lead the full review fighting for the systemic, sustainable changes that deliver accountability, transparency and a path forward to restore our collective trust.”

Meanwhile, Carol Sobel, an attorney representing people who were arrested during the protests and were subject to alleged abuse from police officers, said the report out this week “underscores the claims we made in our lawsuits.”

She added: “It’s really inexplicable that it happens over and over. We’ve gone through this show many times. When does it change?”

Apple AirPods Pro are back on sale for $190 at Woot

A man has been charged for detonating 80 pounds of explosives at a New Hampshire gender reveal party that triggered an explosion, police say

Cops stopped a trans woman because she didn’t make eye contact, then they beat her up