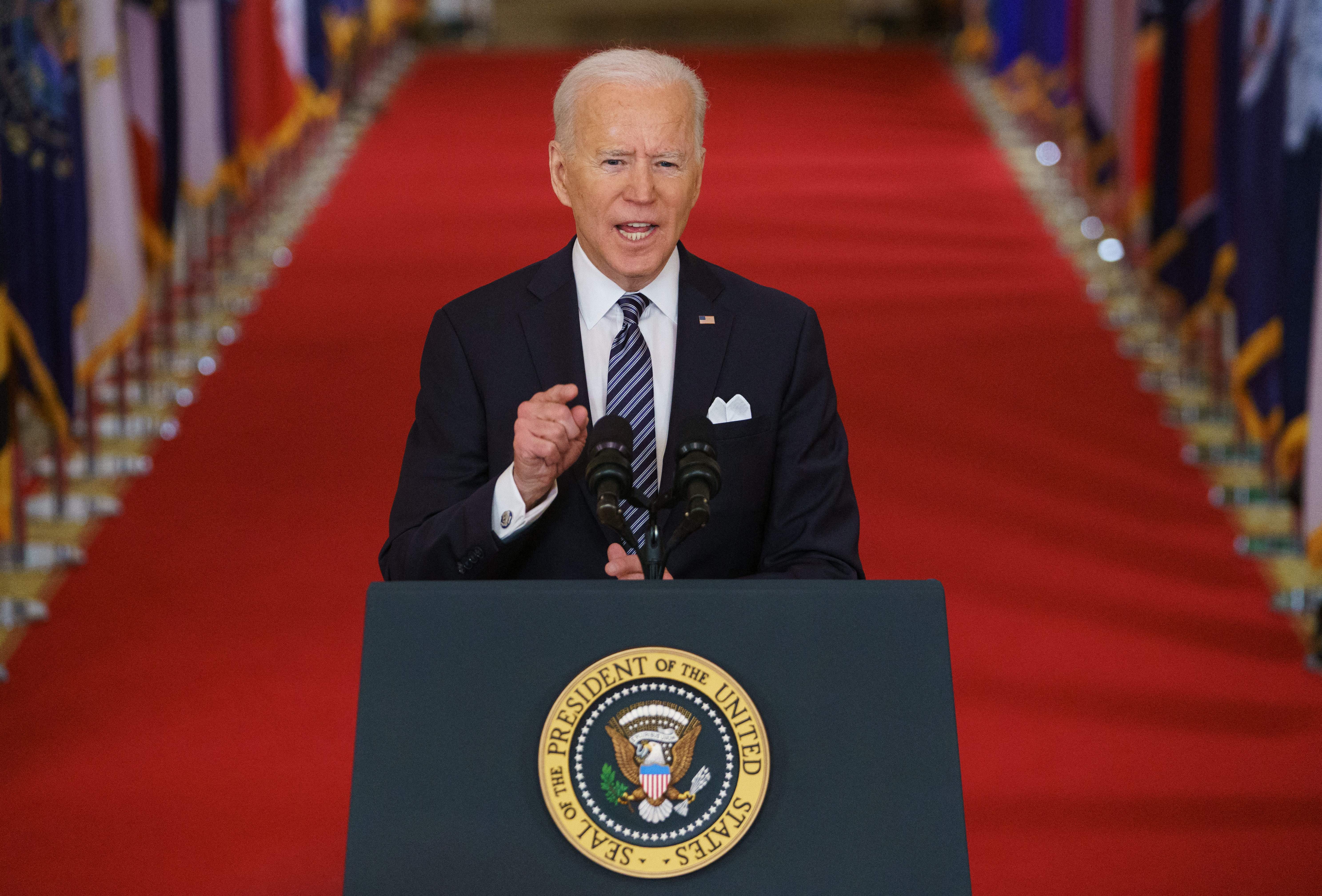 Even before he was elected to the Senate at age 29, Joe Biden always believed that he could make the sale—that he could close the deal about anything. There is a relentlessness at Biden’s core, an intensity often masked by his Uncle Joe political persona.

Biden displayed that passionate salesmanship on Wednesday night with an unusual gesture in his first primetime White House address. The president leaned far over the lectern almost as if he was getting ready to grab a TV viewer by the lapels as he pleaded, “I need you. I need every American to do their part. That’s not hyperbole. I need you to get vaccinated when it’s your turn.”

Biden’s speech, delivered on the day he signed into law his $1.9 trillion stimulus package, differed from what almost any other Democrat would have said at a similar moment. Instead of trumpeting his achievement—instead of basking in passing what may be the most ambitious anti-poverty program since the 1960s—Biden devoted almost the entire speech to the pandemic.

This choice captured something close to the essence of the Biden presidency. Despite a lifetime in government, he will not take the easy road, mimicking standard political oratory. Listening to his internal drummer is a risk for any president, even one who, at age 78, may be beyond the raging pressures of ambition. But even though his words are often soft, and there is little obvious straining for eloquence, the self-confidence that undergirds Biden’s rhetoric is impressive.

Even when it came to talking about a virus that has upended America, Biden reversed the normal flow of political rhetoric by offering empathy to those who mourn before he even hinted at the encouraging news about the pace of vaccination and the trajectory of the virus. Instead of immediately reciting talking points, Biden used an Ernest Hemingway quote about “being strong in all of the broken places,” which was a line he also invoked in 2016, after the death of his son Beau.

Other presidents have promised to be truth-tellers, most notably Jimmy Carter who  pledged, “I’ll never lie to you.” And after Donald Trump, even Ronald Reagan, with his weird beliefs that trees are a major cause of pollution and his vagueness about the details of his own policies, seems in hindsight like Diogenes in the White House. But it was revealing that Biden went out of his way to quote a woman whom he met on the campaign trail last year who urged him, “I just want the truth … just tell me the truth.”

In Biden’s telling, America is poised for a summer of miracles. Not only are we surpassing every major nation in the world in the pace at which we are giving citizens full vaccination protection, but Biden has also expressed the conviction that every adult will be able to get an injection before spring is over.

Biden also added a caveat that provided the necessary burst of honesty. “A lot can happen,” the president said. “Conditions can change. The scientists have made clear that things may get worse again as new variants of the virus spread.”

The dream that Biden offered was a relatively normal Fourth of July—so long as everyone wears masks and signs up to be vaccinated before then. No raucous parties, no holiday weekends of bar hopping, but the first steps back to life as it used to be. As Biden put it, “After this long hard year, that will make Independence Day truly special where we not only mark our independence as nation, but we begin to mark our independence from the virus.”

More likely than not, there will be pundits and political consultants loudly lamenting Biden’s failure to ballyhoo passage of his American Rescue Plan. They will accuse Biden of repeating Barack Obama’s error in not launching a non-stop hard-sell campaign to tell voters about the 2009 stimulus.

It has always been a beguiling fantasy that the Democrats could have avoided the loss of the House in the 2010 elections if only Obama had played Willie Loman with his bulging sample case. In the Republic of Spin, a historical study of White House salesmanship from Teddy Roosevelt to Obama, David Greenberg writes, “If spin can sell a policy or a candidate, its powers tend to be over-rated.”

The truth is, Obama could not have erased the political problems caused by the slow pace of the economic comeback in 2010, even if he had spent more time selling his stimulus package to the public.

Judging from his initial White House address, Biden recognizes that reality. It doesn’t take a crass gesture like putting his name on the checks for most voters to realize that the government is sending them $1,400 payments, and that most families will receive generous tax credits for each child.

Based on what we know right now, the 2022 elections (so vital for the Democrats to maintain control of Congress) will pivot around three factors—the recovery from the pandemic, the condition of the economy, and whether Trumpian crazies win key Senate and House primaries. As Trump learned to his eternal shame, you can’t spin or happy talk a pandemic. Biden and the Democrats will rise and fall based on the realities of life in November 2022—not some glossy PR campaign concocted by White House advisers.

Any president (okay, maybe not Josh Hawley) would seem sane and sober after Trump. That welcome contrast has tended to obscure just how much Biden differs from his Democratic predecessors, Bill Clinton and Obama. Biden doesn’t embrace politics as Clinton did or revel in his disdain for it as Obama did.

If his first seven weeks in office are any indication, Biden’s style is simply to ignore the obvious political moves. After a year of unfathomable tragedy, after four years of a tin-pot authoritarian president, Biden’s decision is simultaneously unconventional and perfect for the moment.

’Not an easy transition’: Inside Trump’s unconventional first months out of office

More than half of Republican voters back Biden’s Afghanistan withdrawal plan, poll finds