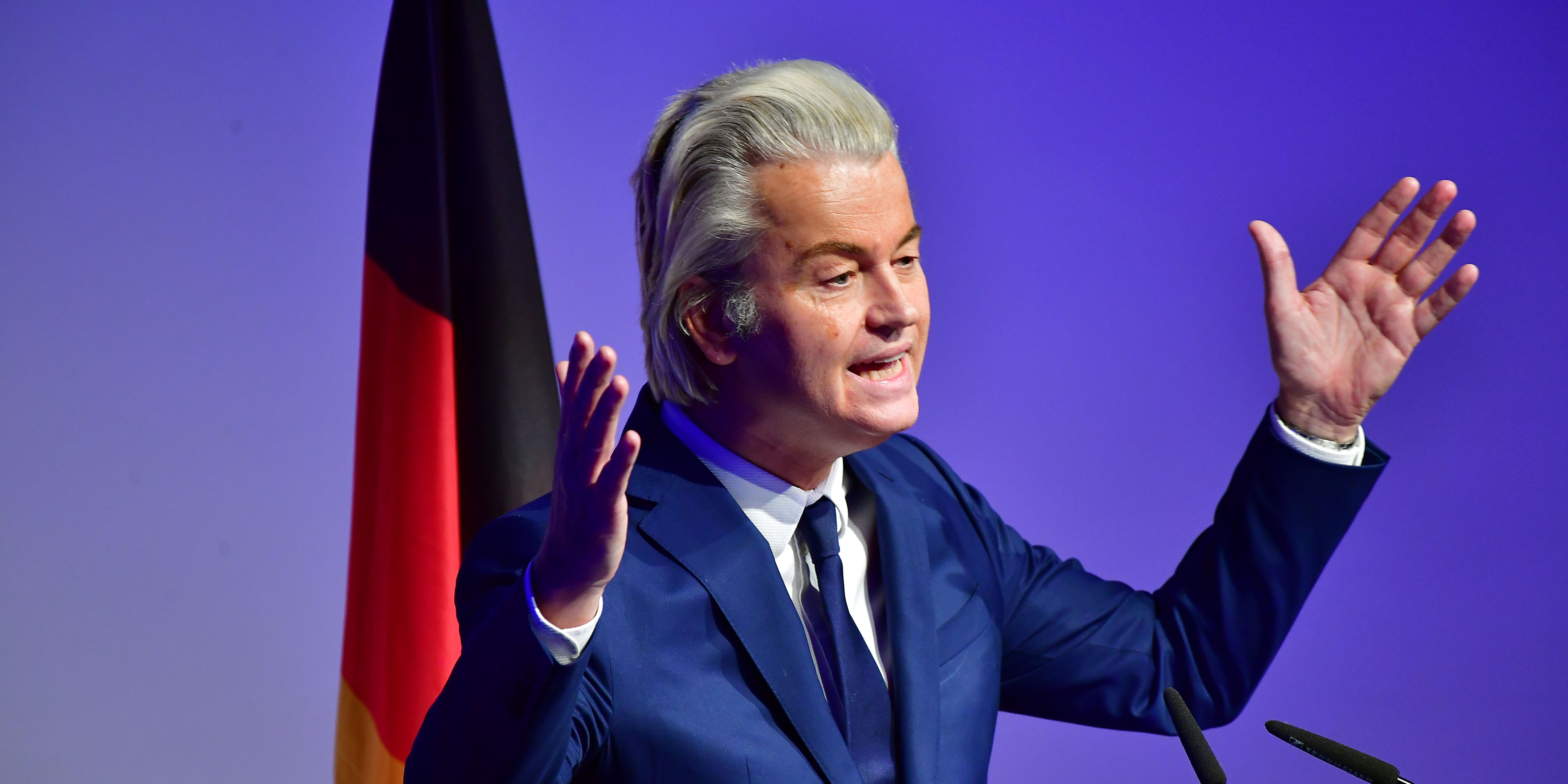 In the lead up to mid-March elections, the Dutch far-right is rallying support.
Far-right parties have capitalised on unrest, exacerbated by the pandemic.
The left must unite efforts and mainstream politicians should stem polarisation to prevent right-wing extremism spilling beyond the voting booth.
Parisa Hashempour is a freelance journalist and International Studies lecturer living in the Netherlands.
This is an opinion column. The thoughts expressed are those of the author.
See more stories on Insider's business page.

In the face of the pandemic, far-right populism is catching on.

While Trump's fall from ungrace across the pond gave onlookers some respite, mistaking the far-right as a flailing entity would be the real mistake. This is particularly salient in the Netherlands, where the electorate is gearing up for mid-March elections.

Despite accusations of racism and the relative popularity of the leading centre-right People's Party for Freedom and Democracy (VVD), radical right-wing populist leaders such as Thierry Baudet and Geert Wilders are rallying support.

In a country with a multi-party coalition system, this does not quite signal the Trumpian threat of all-out fascism. However, the vocal presence of the radical right in government is alarming for both policy and long-term politics. Not least because centre-right mainstay Rutte has a tendency to inch increasingly closer to his radical right colleagues in their moments of success.

And success they will likely have. Confronted with pandemic lockdowns, street riots, government scandals and an agonizingly slow start to the vaccine rollout, right-wing sentiments are simmering as election day calls. The fragmented left must unite efforts and mainstream politicians should stem polarisation to prevent radical right-wing sentiments from spilling out beyond the voting booths.

The digital realm has become the playground of the far-right, and will likely prove crucial to their successes on election day. Lockdowns undermine once-effective canvassing and in-person campaigning as more voters look to the internet for guidance. The extreme right understands this well and the radical political party Forum for Democracy (FvD) has purchased more Facebook advertisements than any other party, reportedly spending a total of 107,000 euros on targeting voters since September. This will likely ramp up as elections draw closer.

In true modern populist tradition, far right politicians in the Netherlands are accused of spreading coronavirus-related disinformation online. None more so than Baudet, who recently posted misleading graphs and statistics about virus contraction rates on Twitter and reportedly circulated conspiracy theories at a much-talked-about dinner party at the end of last year.

There's no doubt that the pandemic adds fuel to the fire of the Dutch extreme right. This is clear in the case of curfew riots that recently made international news. Social media became a powerful tool and leaders and members of far right parties cajoled rioters into taking to the streets. Baudet's party called for an end to “house arrest” on Twitter and Hendrik Wadder, leader of the Party for Freedom (PVV) in Urk declared, “If a curfew is announced tomorrow […], we as the PVV will do everything we can to ensure that it is not enforced in Urk.”

Riots ended in clashes with police. Cars and even a COVID-19 testing centre were set ablaze. The events shed a disconcerting light on the direction sectors of public feeling are headed – that is, bitterly and brazenly towards extremism.

Beyond the voting booths

In recent months, this anti-establishment sentiment settled into violence against state media. Painted as propagandists, broadcaster NOS reported: “almost daily, journalists and technicians on the road to report are confronted with verbal abuse, garbage is thrown, vans are blocked [and] people bang on their sides or urinate on them.”

To some, NOS represents the untrustworthy liberal elite, pointing to frustration amongst voters beyond the media. With police targeted, violence in streets, and both news sites and governments smeared, the situation bears some resemblance to events that unfolded in the US. In both cases, governmental distrust is a weapon utilised by far-right actors.

Noting this similarity, Director of the International Institute of Social History Leo Lucassen says, that “radical right-wing politicians abusing the corona crisis to get their political message out shows once again how problematic their ideas are for a well-functioning democracy. It is no longer just about standing up for marginalized voters but about discrediting the entire democratic system.”

It is not only supporters of official parties we ought to consider. The Dutch counter-terrorism unit NCTV warns of the continued risk of right wing extremist violence in the Netherlands, particularly from those who mobilise online outside mainstream politics, as is thought to have occurred with the riots.

Of course, the Netherlands is not the US. The political system there does not operate in the same way as presidential elections. The multiparty system means coalitions are always in place, and parties will likely compete to clasp hands with Rutte and his centre-right VVD party. However, the radical right in the country continues to gain steam, a cause for concern for mainstream and left-leaning politicians.

Success in provincials, success in the polls

The far right is ready to build on victories made in 2019's provincial elections. It was then that Baudet's recently formed FvD party soared to success, winning the most votes at the time, then securing 13 seats in the senate. Quoting Cicero and cultivating a more palatable and intellectual image for anti-EU, anti-Islam voters, he reached the ultra-conservative electorate that had shied away from the more crass public image of anti-elitist PVV leader Gilders, internationally dubbed 'The Dutch Donald Trump'.

A lot has happened since then. Baudet clawed his way back from leadership expulsion at the end of 2020 and has been criticised for his support for Trump during the Capitol riots. This February, he made headlines again for allegedly racist and homophobic WhatsApp messages including one disturbing claim that white people had an average IQ of 110, while Hispanics had 90 and African-Americans 75.

It is alarming that despite this, he returns ready to win seats. 76% of his 37,000 party members voted for the politician to continue on as party leader after revelations of homophobia, racism and neo-Nazism within the youth wing of the FvD became public knowledge late last year. Now, election polls show he could double his current holding to four seats. Clearly, the politician has clout.

Far right mainstay Geert Wilders is set to profit from any voter fallout resulting from recent scandals and his anti-Islamic PVV party is coming second place in the polls. Rem Korteweg, an analyst at the Clingendael Institute in the Netherlands, says Wilders' party, along with Baudet's FvD are likely to achieve around 20 percent of the vote.

Far right newcomers Right Answer (JA21) are also hoping for a spot on the stage of the Dutch elections, in which 44 parties registered to compete for seats. Made up of FvD deserters, the new anti-immigration party markets itself as the 'realistic right'.

This year, elections are set to take place on the 15th, 16th and 17th March, spread over three days to circumvent the effects of the pandemic. However, the country's virus cases remain high, which may have a bearing on how elections take place. As seen with elections abroad, the far-right is prone to invoke suspicions in times of electoral uncertainty – and Dutch voters are some of Europe's most volatile. In the previous general election, 54 percent of voters did not know how they would vote even four days before they went to the booths. This year, one in five do not know how they'll vote on the day, but the right-wing is reported to be most loyal.

The political Petri dish moulded by the pandemic offers a hospitable space in which extremism can grow. To slow the spread, we have a lot to overcome. Mainstream politicians must look beyond the loud populist voices, restore faith in their politics, and work against the undercurrent of increasing polarisation propped up by digital spaces.

Parisa Hashempour is a freelance journalist and International Studies lecturer living in the Netherlands.

Running to replace husband who died from Covid-19, Julia Letlow hopes to bring her own experience to Congress