Oklahoma State Representative Justin Humphrey has already proposed more than a dozen pieces of legislation this year, writing a bill that would make it a felony to “cast contempt” on the American flag, another that would allow public school teachers to face legal action for including “unorthodox views as part of the curriculum,” and a third that would require vaccine manufacturers to disclose whether their vaccines contain tracking devices.

The Republican, whose district includes four counties in the southeastern part of the state, also authored House Bill 1648, which directed the state Department of Wildlife Conservation to establish an annual hunting season for, uh, Bigfoot. “What we want to try to do is offer a bounty of $25,000 for a real-life Bigfoot,” Humphrey said in a video posted to his Facebook page. “Our goal is not to kill Bigfoot, we want to make sure that everybody understands that we're not trying to shoot Bigfoot. What we want to do is trap Bigfoot.”

Although this bill could just be a bonkers way to promote a local Bigfoot festival, that hasn't made it popular among the state's other Bigfoot researchers, who feel like it trivializes their efforts and jeopardizes their safety.

The past month has been a complicated one for Bigfoot. Humphrey's bill stalled in committee, which meant that the Oklahoma Department of Wildlife Conservation didn't have to figure out the bag limit for a cryptid. (“In addition to Bigfoot not being recognized as a wildlife species, we do not have any reliable research to suggest that there is a population in Oklahoma at all, let alone a huntable population,” an ODWC spokesperson sighed to VICE.) But on the other hand, Humphrey recently told reporters that the bounty on Bigfoot's oversized head has increased to $2.1 million, thanks to the producers of an unnamed “Hollywood Bigfoot movie.”

According to the Bigfoot Field Researchers Organization, there have been 106 confirmed Bigfoot encounters in Oklahoma, most recently last fall, when a hunter in Tulsa County reported hearing some “strange knocks” in the forest. The state is also the home of the Mid-America Bigfoot Research Center (MABRC) and hosts two annual Bigfoot events, the Oklahoma Bigfoot Symposium and the Honobia Bigfoot Festival—which, perhaps unsurprisingly, is in Humphrey's district. (The organizers of the Honobia event declined to comment for this piece.)

Although Humphrey has pivoted away from the idea of sending armed Oklahomans into the woods to shoot at anything vaguely human-shaped, the idea of trapping Bigfoot hasn't been well-received by state residents who take their Bigfoot sightings quite seriously. “It does have a negative effect,” D.W. Lee, a longtime Bigfoot researcher and the director of the MABRC, told VICE.

“[Humphrey] has done it as a tourist trap. He's not really taking it serious. For those of us that are out there, now we've got to worry about all these idiots going out into the woods, making 'whoops' (loud vocalizations) and setting traps. When they were talking about actually hunting it, I told them it was just stupid. It still makes for a dangerous combination, when you'll have people that have no clue about what they're doing in the woods out there trying to claim $2 million.”

Lee has been quite literally on Bigfoot's trail for the past 30 years, ever since he saw The Legend of Boggy Creek, a film about an oversized ape-like monster that had reportedly been seen in southwest Arkansas. “I was like 'Well, crap, that's only about a three-hour drive from my hometown,'” he said. “I drove down there, poked around for a couple of days, and then started reading about Bigfoot. I learned that Bigfoot was really active in our area [in Oklahoma], just nobody realized it. We started investigating, having more sightings of them around here, and it just kind of grew from there.”

In the years since, Lee has led other researchers on weekend-long expeditions to try to get audio or visual evidence of Bigfoot. “We call them a troop, just like chimpanzees,” he explained. “In our research area, we have maybe two dozen. We know their main routes and there may be four or five in an area at one time,” he said. “The main area that we're going to this weekend is a six mile long valley that's got a lot of overhangs and stuff like that. Since the weather's supposed to be a little bad, we think we'll have good luck trying to see them down in that valley.” 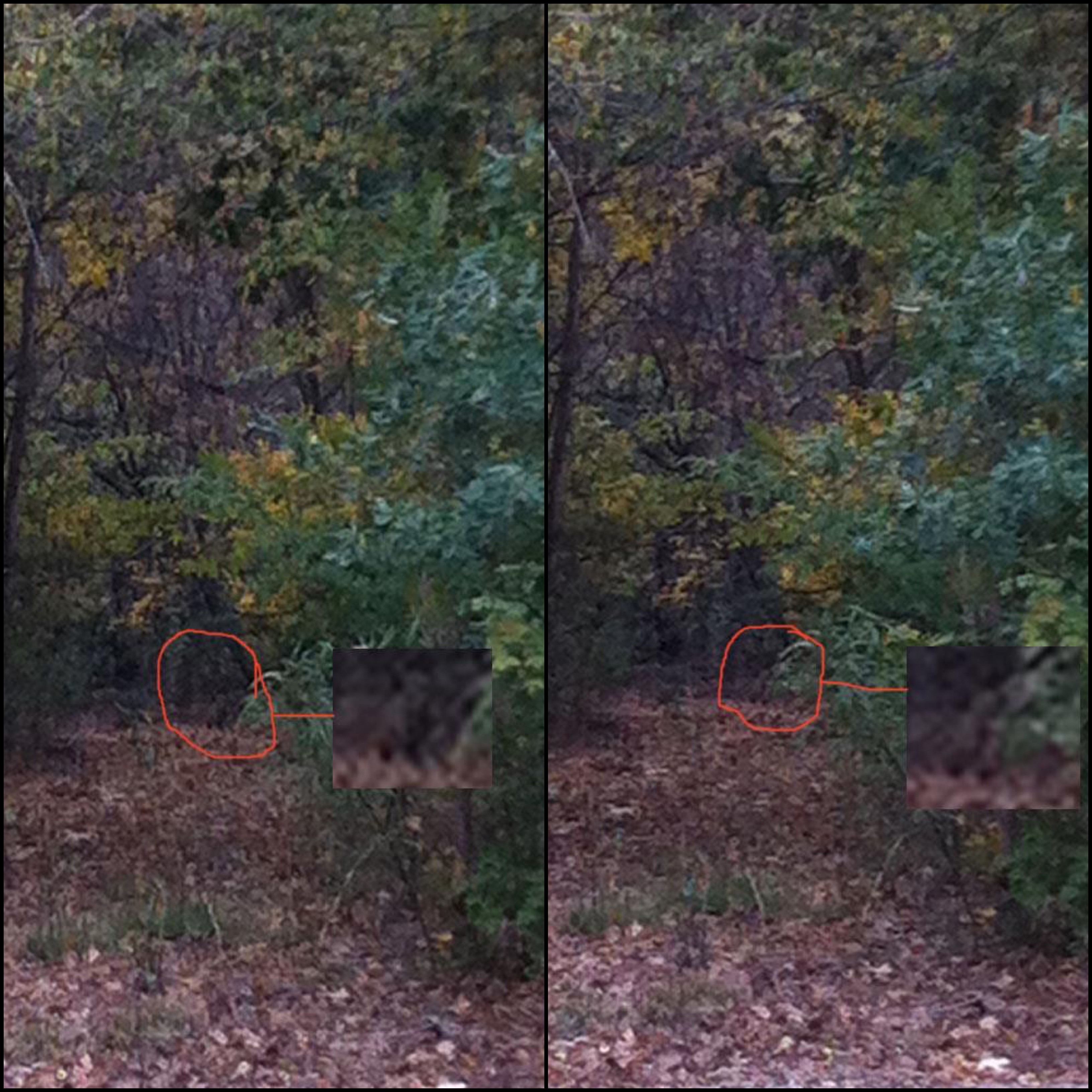 Two images of a November, 2011 Bigfoot encounter in SE Oklahoma (Photos Courtesy of the MABRC)

Just to reiterate, Lee is serious about Bigfoot. He writes “In the Shadows,” a regular column for the Stillwell Democrat-Journal about the creature (recent topics have included Bigfoot's ability to camouflage itself and the differences between step length and stride length), and has designed a thorough multi-step process that the MABRC uses to evaluate the validity of any sightings. He does not have patience for what he calls 'the woo-side' of Bigfooting.

“We actually show the research,” he said. “We're showing the evidence that we're actually collecting: the audio, the thermal [images]. We're not going in there and telling you 'Oh, Bigfoot disappeared and beamed up to a UFO and Elvis was up there waving out the window at everybody.'”

There's nothing magical or supernatural about what he calls “a big screaming monkey of above-average intelligence,” and he believes that it could be a surviving descendant of Gigantopithecus blacki, a massive mid-Pleistocene ape. Whatever Bigfoot is, Lee said he's had more than two-dozen encounters with them.

“We always have a rule that you don't go down a trail by yourself,” he said. “But one time, I messed up, came around the corner, and there's two Bigfoot carrying a good-sized calf down the trail. All of a sudden, the back of my four-wheeler gets picked up by a third Bigfoot that had been standing off to the side that I didn't even see. I think all it was trying to do was keep me running into the other two Bigfoot, but it broke the bumper off the back of my four-wheeler and left its handprints on it. It was a pretty big encounter.”

That kind of unpredictability is what he says increases the danger for untrained Bigfoot trappers who might be lured into the woods by the thought of a seven-figure payout. “Just because you only see one Bigfoot doesn't mean that another one's not sitting there watching,” he warned. “They're not going to let you take their buddy without a fight. Then you have to worry about how much tranquilizer you'll need to take one down. If you use too much, you'll kill the animal, but if you don't use enough, then he's going to be able to tear your arm off and beat you with it.”

Lee isn't interested in the money—not that he thinks any Bigfoot will be caught—as much as he just wants to know the truth about what could be watching us in the woods. “My first encounter was in 1997 and after that, I just kept on going,” he said. “Even if I wanted to quit, the curiosity is what keeps me going.”