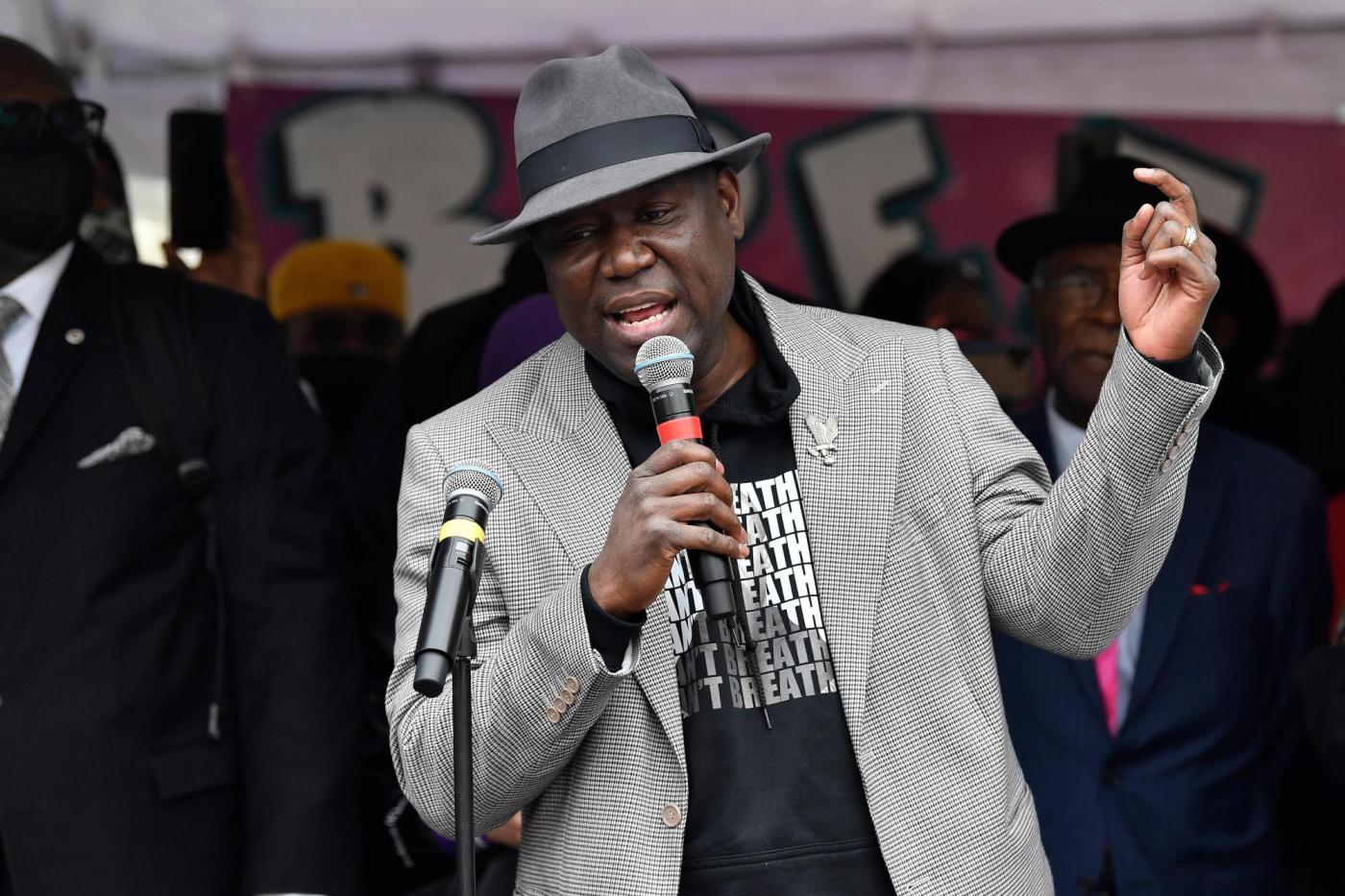 LOUISVILLE, Ky. — On the one-year anniversary of Breonna Taylor’s death, the slain Black woman’s family continued their call for justice as hundreds of demonstrators gathered in downtown Louisville on Saturday.

Austin spoke from a stage set up in Jefferson Square Park, which became an impromptu hub for protesters during months of demonstrations last summer. Flanked by two hand-painted murals of Taylor, activists repeated calls to charge the police officers who killed the Black woman during a raid at her apartment.

The crowd shouted Taylor’s name and “No justice, no peace” as they gathered near an outdoor memorial that includes a mural, posters, artwork and other mementos honoring Taylor’s life. Some organizers gave away food during the speeches.

Taylor’s family then led the protesters on an afternoon march past City Hall.

In a tweet Saturday, President Joe Biden called Taylor’s death “a tragedy, a blow to her family, her community, and America.”

“As we continue to mourn her, we must press ahead to pass meaningful police reform in Congress. I remain committed to signing a landmark reform bill into law,” he wrote.

The rally came a day after Kenneth Walker, Taylor’s boyfriend, filed a federal lawsuit against the Louisville Metro Police Department, alleging his constitutional rights were violated during last year’s botched raid, news outlets reported. Walker last year filed an ongoing state lawsuit against the city and police, saying he was the victim of assault, battery, false arrest and malicious prosecution.

Taylor’s front door was breached by Louisville officers as part of a drug raid in the early morning hours of March 13, 2020. Walker fired his gun once, saying later that he feared an intruder was entering the apartment. One officer was struck, and he and two other officers fired 32 shots into the apartment, striking Taylor five times.

Taylor’s death initially flew under the media radar, as the COVID-19 crisis shut down society, but George Floyd’s death in Minnesota and the release of a chilling 911 call from Walker in late May sparked interest in the case.

A grand jury indicted one officer on wanton endangerment charges in September for shooting into a neighbor’s apartment, but no officers were charged in connection with Taylor’s death.

A Kentucky judge last week signed an order permanently closing a criminal case against Walker for firing at the officer.

Walker referenced the closure of the case against him during Saturday’s rally.

“I gotta say that’s a nice start, but that’s not where we finish,” Walker said. “We’ve got to keep going.”

Demonstrator Olivia Alexander said the anniversary of Taylor’s death reminded her to continue to work for racial justice, despite some setbacks in the past year.

“As we’ve seen, there’s not been any justice for Breonna Taylor, and a lot of the other brutal killings of Black Americans, so holding onto hope has been the most important thing,” Alexander said.

An ongoing federal investigation could be wide ranging and is regarded by many as the last chance for justice for Taylor’s death.

Kentucky Gov. Andy Beshear, a Democrat, tweeted a statement in support of Taylor’s family, including her mother, Tamika Palmer.

“Today we remember Breonna Taylor, her tragic and unnecessary loss and the immense work we have ahead of us,” he said. “I will never understand the unimaginable grief of Tamika Palmer and other family and loved ones, but I am committed to listening and working with others to be build a more suitable and fair commonwealth for every Kentuckian.”

Hudspeth Blackburn is a corps member for the Associated Press/Report for America Statehouse News Initiative. Report for America is a nonprofit national service program that places journalists in local newsrooms to report on undercovered issues.

Meghan’s racism claims come as no surprise to Black Britons

Biden Sends In Troops To Liberate Afghanistan From U.S.

U. of Michigan-Dearborn Mandates Coronavirus Vaccination or Weekly Tests for Students

Kids are taking governments to court over climate. And they are starting to win