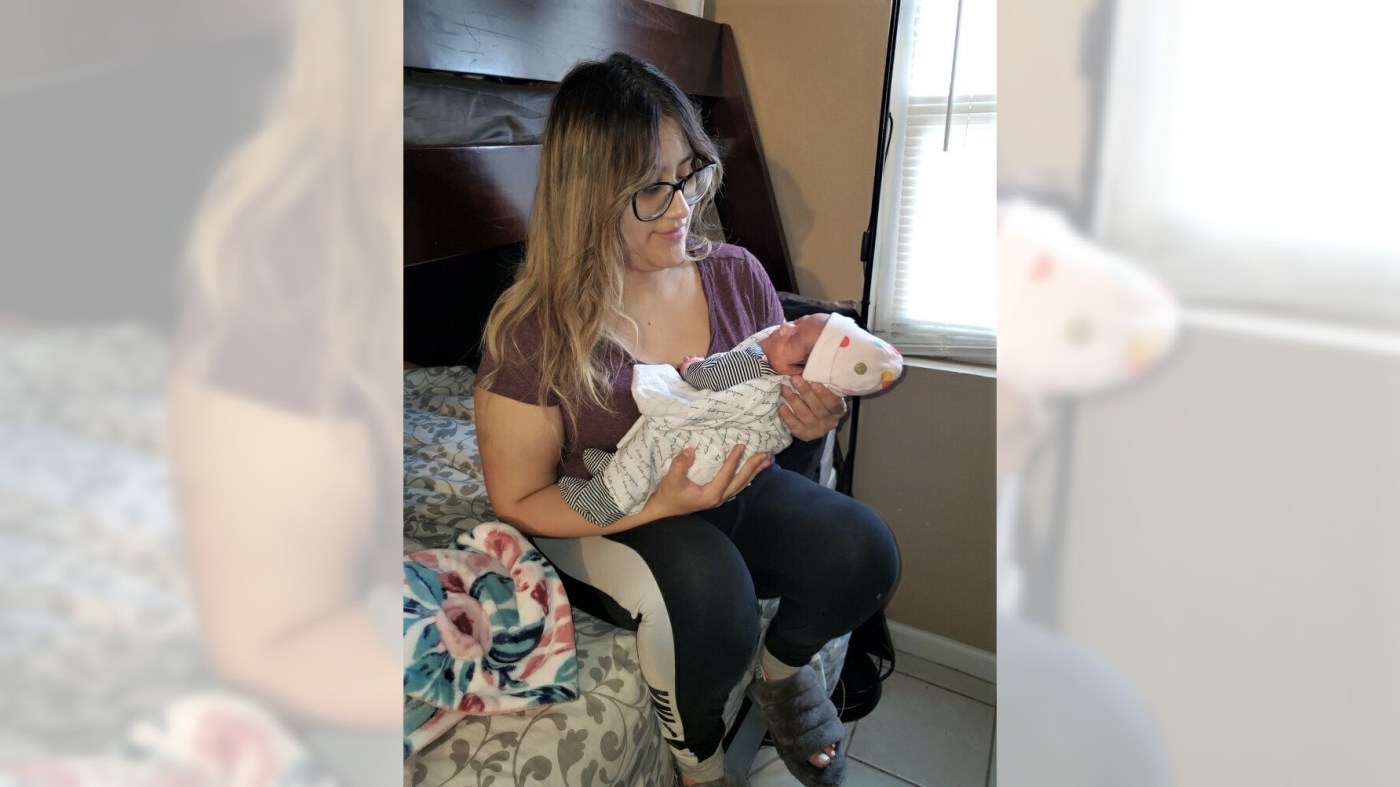 For Yvett Camacho and her newborn baby girl, miracles come in pairs.

The 30-year-old mother from Fontana was so ill from the effects of the coronavirus that maximum oxygen treatments weren’t working and she nearly died. Yet, after mom was given advanced pulmonary treatment, and baby received special care from the neo-natal intensive care unit, both beat long odds and were recuperating at home Friday, March 12.

After being airlifted from San Antonio Regional Hospital in Upland to Cedars-Sinai Medical Center in Los Angeles on Jan. 21, Camacho was attached to a machine that functioned as artificial lungs. While in a coma, doctors immediately delivered her baby two-and-a-half months early by cesarean section. Ten days later, Camacho was taken off the Extracorporeal Membrane Oxygenation (ECMO) heart-lung machine and was released on Feb. 7.

“It is a miracle. Even the doctors explained we almost didn’t make it,” said Camacho, while cuddling her daughter, Emary Jane, on her couch Friday. Baby Emary had been recuperating for another month at San Antonio Regional until Thursday afternoon when her mom took her home.

The mother-and-child reunion was a rare instance of a pregnant woman with COVID-19 and her premature baby both surviving, said Dr. Dominic Emerson, cardiothoracic surgeon and associate director of heart transplant and mechanical circulatory support at Cedars-Sinai.

“It was very touch and go at first,” he explained. “There was a lot of stress because there were two lives at risk.”

A study about similar cases had a sample size of less than 10, Emerson said, since not many hospitals have the heart-lung machine. Using the ECMO machine gives a patient’s lungs time to recover, he said.

“You have to be extremely sick to need this,” he added. “It is not done frequently.”

For Emerson and the other doctors and nurses who provided care, Camacho’s case was a shining light amidst the shroud of darkness after seeing extremely sick COVID-19 patients succumb to the virus. There have been 29,986,420 cases and 545,250 deaths in the United States as of Friday.

“To see someone who got through it and have years ahead of them and can go on and touch the lives of other people, namely her and her baby, that is a good feeling. I really cherish that,” Emerson said.

Camacho remembers having a vision during her time in the coma while on the ECMO, she said. Her grandmother and her mother, Martha Patricia Camacho, both deceased, communicated words of encouragement.

“She (her mother) spoke to me about Emary and my son Ethan, who is 7. She told me it wasn’t my time to go because of the baby,” said Camacho.

Her 32-year-old mother was killed in Pasadena on Dec. 23, 1998, while the family was living there. Camacho had just turned 9 years old when she lost her mom and was traumatized. Extensive accounts of the murder and trial were reported by the Pasadena Star-News, a member of the Southern California News Group. According to published accounts, the mother’s boyfriend was convicted of the crime and spent 21 years in prison.

But the body was never recovered, said Camacho, as well as news accounts.

“That (vision) was the closure I feel myself and my family never got. It was very touching and an emotional moment,” she said.

After her release from the hospital, Camacho noticed dozens of texts on her phone and posts on social media from family and friends praying for her. One post from her cousin mentioned her mother and her grandmother and said “they are not going to let me pass on,” she said.

“My family was raised Catholic. I do believe in the power of prayer,” Camacho said. “I really do believe that God was with me and so was my mom and my grandmother.”

Camacho is undergoing physical therapy for movement and speech. She takes her daughter to doctors’ appointments nearly every day in order to continue her baby’s recovery from being born premature. Emary Jane Camacho Ceballos was born weighing 3 pounds, 1 ounce. Now, nearly 2 months old, she weighs 5 pounds, 6 ounces, her mother said.

‘It’s been exhausting, tiring, maddening’: A year of tumult for LA restaurants during pandemic

Education saw a lot of changes in the past year, here’s what could be here to stay

“She is a little fighter, just like her mom,” Camacho added. “She did have some complications but she has progressed a lot. She has come a long way.”

Camacho visited Emary in the NICU for short periods after she no longer tested positive for COVID-19. But being at home with her daughter has a whole different feeling.

Syncing up With Chrome, Microsoft Accelerates Edge’s Release Cycle to Every Four Weeks

The Financial Truths COVID-19 Has Taught Us

A year of pandemic: Through the lens of photographer Brittany Murray

32 Things From Walmart That Are Easy To Use, But Will Elevate Your Cooking Game