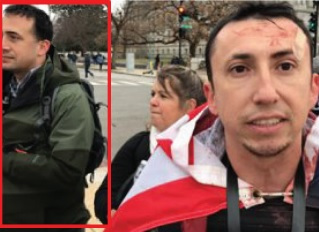 A pair of brothers from Los Angeles and Alhambra were arrested Tuesday, accused of taking part in the attack on the U.S. Capitol Building on Jan. 6 along with hundreds of supporters of former president Donald Trump.

FBI agents raided the homes of Kevin Cordon, 33, of Alhambra, and Sean Carlo Cordon, 35, of Los Angeles, early Tuesday morning, taking them into custody without incident, a spokeswoman for the agency said.

Both appeared in U.S. District Court in Downtown L.A. the same day, and were charged with breaking into the Capitol and attempting to impede an official proceeding. The brothers were released on $50,000 bail and under conditions by a judge. Their next court date was not immediately available.

The Cordon brothers are two of a handful of Californians who so far have been arrested and charged for allegedly entering the Capitol grounds during the riot. Hundreds mobbed the seat of the U.S. government that day, forcing members of Congress and Vice President Mike Pence to flee in the middle of a symbolic vote to certify the election of President Joe Biden.

Since then, hundreds of people who were alleged to have broken in with the mob have been arrested and charged.

In his affidavit unsealed on Tuesday, the FBI agent who tracked down the brothers said he identified them as participants in the Capitol attack through surveillance camera footage, flight records, their drivers licenses and even location data from their photos created when they made calls from inside the building or around Washington, D.C. the same day..

Kevin Cordon first came to the FBI’s attention through a video published on a Finnish news website. A reporter for the website interviewed Cordon, wrapped in an American flag and sporting a bloody forehead, as he left the Capitol grounds. The FBI said Sean Cordon could also be seen in the video just behind him.

“We’re standing up and we’re taking our country back,” Kevin Cordon told the reporter for the Finnish newspaper Ilta Sanomat. “This is just the beginning.”

As the interview continued, Cordon told the reporter “we had to actually step foot in their building that they think their [sic] own,” according to the affidavit.

The FBI said footage from the day showed both brothers, Kevin Cordon in the American flag and Sean Cordon wearing a gas mask, enter the building through a broken window.

Kevin Cordon confirmed what happened in the interview. He said he saw other rioters “scuffling with the cops” and was bloodied when he was hit in the forehead with “a projectile, not sure what it was.”

The agent said both men were seen at Los Angeles International Airport taking a red-eye flight on Jan. 5, with similar builds and wearing similar clothing as the men in the footage near the Capitol.

Information about attorneys for the men was not immediately available Wednesday.

Law enforcement on alert in D.C. after plot warning at US Capitol

He dressed up as ‘antifa’ for Capitol riot and got arrested

Chauvin Judge Pushes Ahead With Jury Selection. Prosecutors Are Freaked.

It is very hard to get bearish when the news is this good: Hugh Johnson

US may soon reach a tipping point on Covid-19 vaccine demand. Here’s why that’s concerning

CDC updates guidance on cleaning surfaces to protect against COVID-19

How to find a COVID-19 vaccine appointment in your area