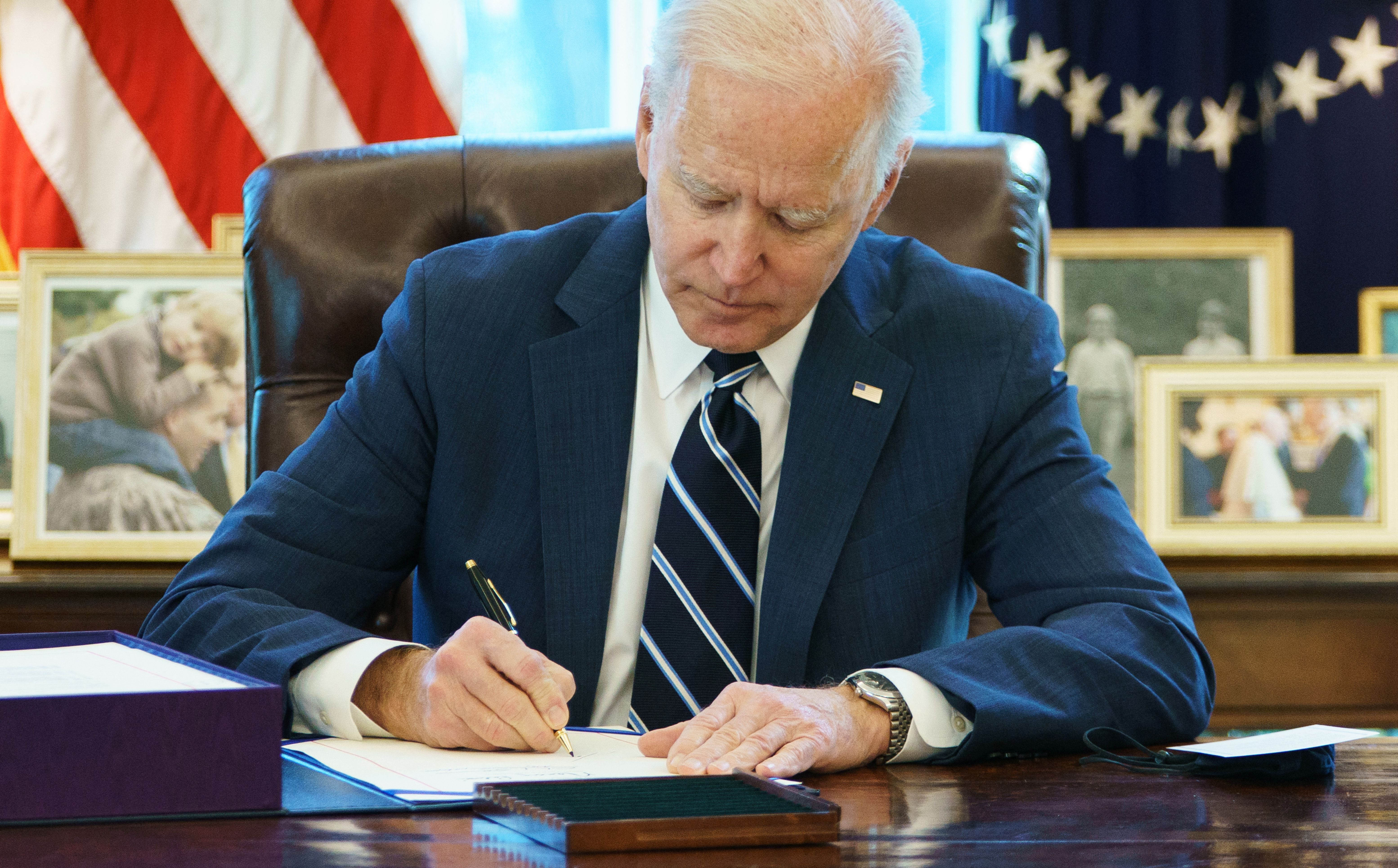 In his first primetime address to the nation Thursday night, President Joe Biden will likely spend at least a little time touting the provisions of the American Rescue Plan Act, the $1.9 trillion coronavirus relief package Biden signed into law Thursday afternoon. According to a recent internal memo, Biden, evidently keener to take credit for his successes than Obama was, will also be sending surrogates across the country in the days ahead to spread the good word about the bill. “We’re going to make sure the American people know tangibly what the Rescue Plan means for them,” deputy chief of staff Jen O’Malley Dillon explained to senior staffers.

Tangibly, it means a lot. Beyond the $1,400 stimulus checks and an extension to the federal unemployment supplements—both downsized over the course of negotiations by moderate Democrats—the Rescue Plan amounts to a large, temporary expansion of the American welfare state. The provision that has justly gotten the most attention from progressive experts is a one-year increase and expansion of the Child Tax Credit. Under existing policy, CTC benefits are gradually phased in and out by income, which limits or eliminates the credit for the country’s poorest families—the fruit, in wonky policy design, of delirious, racist propaganda about welfare and work. This year, under the Rescue Plan, the CTC will have no phase-in, be distributed monthly, and have its maximum benefit expanded by up to 80 percent, from $2,000 per child to $3,600 for children under six or $3,000 for older children. Those changes are expected to cut child poverty by nearly half—and that’s before a separate expansion of the Earned Income Tax Credit, the unemployment supplement, and the stimulus checks are factored in.

As a whole, according to the Tax Policy Center, the Rescue Plan will boost the income of the average household in the poorest quintile of income earners by more than 20 percent. Last week in The New York Times, Employ America’s Elizabeth Pancotti offered a few hypothetical examples of Americans who might benefit, in order to make those numbers concrete. “For a working single mother of a 3-year-old who earns the federal minimum wage—just under $16,000 a year—the bill would provide as much as $4,775 in direct benefits,” the Times’ Jim Tankersley wrote. “For a family of four with one working parent and one who remains unemployed because of child care constraints, the benefits could total $12,460.”

And there’s much more. The Rescue Plan also significantly expands Obamacare subsidies for the next two years, provides $86 billion in funding for struggling union pension plans, and includes tens of billions in funds specifically for racial minorities: $5 billion in debt relief and other assistance for minority farmers as well as more than $31 billion for Native American communities, the largest such investment in American history.

So less than two months into his term, Joe “nothing will fundamentally change” Biden has signed a very expensive and historic piece of legislation. It’s not obvious we should be surprised by this. The bill is a response to a very expensive and historic emergency that has killed over half a million Americans. Given the empirically clear inadequacy of federal stimulus in 2009 and the extraordinary nature and scale of the coronavirus crisis, a very large and expansive package was to be expected.

It is true, though, as many progressives have insisted over the past several days, that changes in the country’s ideological landscape over the past decade are probably responsible for the shape the Rescue Plan took and some of its provisions. The left has spooked the Democratic Party establishment in high-profile primaries and shifted a policy discourse now populated by far more left-leaning journalists and policy professionals than there have been at any point in recent memory. Centrists, by contrast, have been the victims of their own success: With the full run of American politics for most of the last 30 years, they’ve failed to produce solutions adequate to the scale of the problems the country faces and are plainly out of ideas beyond a conviction that whatever progressives are proposing at any given moment should be smaller in scope. That simply isn’t fertile ground for meaningful policymaking in a crisis.

But the crisis is coming to an end. When it does, things will be looking up for both Americans eager to resume their normal lives and the policy voices who oppose improving them further. The question many commentators have asked over the last week—why the right has been louder in defense of Dr. Seuss than in opposition to a “free money” pandemic relief package supported by more than 60 percent of the country—really answers itself. We can expect them to be more attentive to more contentious items on Biden’s agenda. But progressives should probably be more worried about their opponents within the Democratic coalition, who will continue shaping and shrinking Democratic bills before Republicans even get a say on them. Centrist policy professionals may be losing their grip on a large share of the Democratic Party’s politicians and they are clearly out of touch with voters. But, as negotiations over the Rescue Plan’s checks and unemployment benefits illustrated, they still have the ear of the moderate and conservative Democrats in the House and Senate who are functionally running the party in Congress.

In the weeks ahead, the word on their lips will be “inflation.” And this week, Politico offered an early preview of both the “furious debate” to come and how most of the press will cover it. The Rescue Plan, Politico’s Ben White warned, “could be a fiery accelerant for global markets as gas prices surge, home prices jump, speculative assets soar and investors increasingly fear the kind of sharp inflation spike that can hit with remarkable speed if the government pours too much gasoline on an already warming economy.”

“It will be a moment of glory for Biden when he signs the new relief act on Friday, the centerpiece of his early agenda,” he continued. “But a sunny ending is not fully guaranteed, with the nation taking an almost entirely new path on managing the economy.”

While the Rescue Plan is a real achievement, a full agenda—on poverty, climate, health care, and other issues, still lies ahead on that path. And, in fact, the size and scale of the Rescue Plan reflects a lack of confidence on the part of the administration and Democrats in the amount of progress that can be made in independent legislation untethered to the pandemic. Would money for union pensions have passed on its own? Will a $15 minimum wage, now that the effort to staple that to Covid relief has failed?

All told, talk about the bill and the Biden administration representing an end to the era of small government post-crisis is premature, in part because Biden has still not made a Covid-independent argument for big government. In January, Timothy Noah offered a telling read of his inaugural address:

He didn’t say, “I’m for big government, and I’m going to make it bigger.” But he did say this: “We can right wrongs. We can put people to work in good jobs. We can teach our children in safe schools. We can overcome the deadly virus. We can reward work and rebuild the middle class and make health care secure for all. We can deliver racial justice and we can make America once again the leading force for good in the world.” Biden didn’t say that the federal government can do these things, but that’s what he meant.

But if that’s what he meant, he ought to make it clear—less to the American people in the aggregate, who already believe it, but to the legislators who are almost certain to urge the administration to dial things back once the pandemic winds down. If he doesn’t, and progress stalls, progressives should redouble their own efforts to advance that argument rather than resting on their laurels and assuming the Democratic policy shift will be sustained by its own momentum.

Have Democrats Learned Their Lesson?

Hits and misses from Biden’s speech to Congress

What To Know About America’s Refugee Resettlement Program