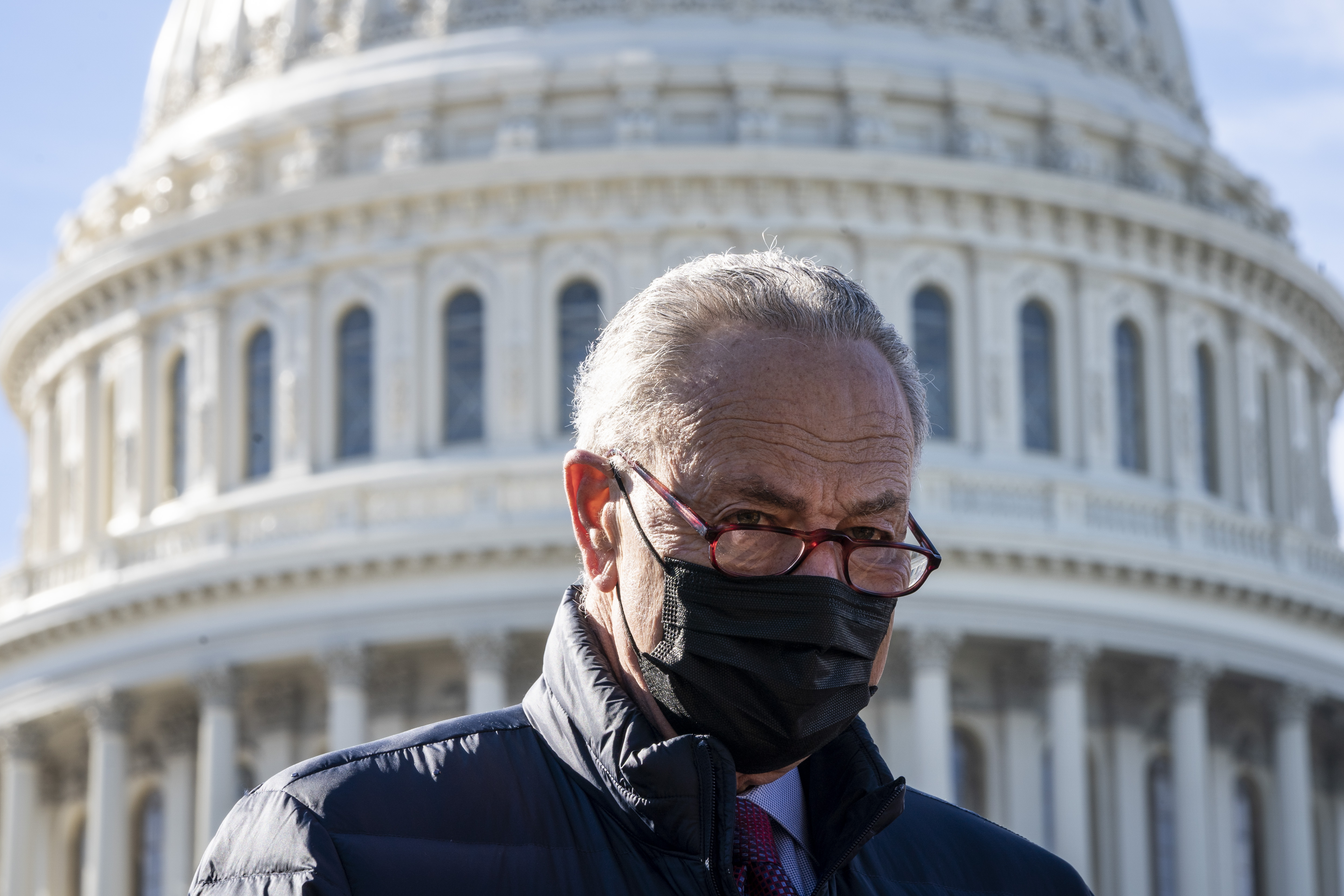 There is a rapidly consolidating consensus among the liberal commentariat that Democrats have learned from mistakes made during the Obama years and updated their thinking to adapt to new political realities. For once, it seems, Democrats may be in array.

The design and passage of Joe Biden’s American Rescue Plan is the most persuasive evidence that, as New York’s Eric Levitz puts it, “the Democratic Party’s approach to legislative strategy has fundamentally changed.” As the left’s usual critique of previous Democratic strategy goes, the last time the party controlled both chambers of Congress and the White House, they were too fixated on outmoded theories of bipartisanship and consensus, and too attached to behavioral economics, leading them to pass an economic stimulus bill that was too small to wrest the country out of the recession and that deliberately hid many of its benefits from regular voters. Then, with the Obama White House seeking any Republican vote it could get, they were drawn into a tortuous and drawn-out process of debating a health care plan. Months of negotiation leading nowhere only made the final result less popular. The House, meanwhile, took tough votes on multiple long-awaited Democratic policy promises, only to see those bills ignored by a Senate that had nearly ceased to function.

The end result was the extraordinary squandering of a historic opportunity, and then a hard right turn in the GOP and among the electorate. In spite of that squandering, all of the most powerful Democrats in this new administration and in Congress are people who were present, and partially responsible, for each of those missteps from Barack Obama’s first years in the White House.

And yet some of them do seem to have learned a lesson. Senate Majority Leader Chuck Schumer said recently that he basically agreed with the gist of the left’s entire line of criticism. “What happened in 2009 and ’10 is, we tried to work with the Republicans, the package ended up being much too small, and the recession lasted for five years,” he told The Washington Post. (This succinct explanation elides the important role of Democratic economist Larry Summers in limiting the size of the 2009 stimulus—Democrats effectively conceded to Republicans before even negotiating with them.)

Joe Biden’s American Recovery Plan, which Biden is expected to showcase to Americans in a primetime address on Thursday, seems designed not to repeat those mistakes. As The Week’s Ryan Cooper wrote earlier this week, “The ARP is more than twice as big as the 2009 Recovery Act, and structured far more generously.” How it passed is almost equally important: While Senate moderates (as usual) made a theatrical show of making it a bit worse, the size of the entire package wasn’t arbitrarily reduced, and Republican support for the bill was not made a condition of moderate support.

Meanwhile, there are other signs that Democrats understand the urgency of the moment and that they should exercise power now lest they lose it as quickly as they did in 2010. The House of Representatives has already passed other vitally necessary bills designed to make the United States vastly more democratic, in both government and the workplace. It passed the PRO Act (with the surprising support of five Republicans, including three who co-sponsored it). The bill would completely overhaul American labor law to make it far easier for workers to organize and collectively bargain. And it passed H.R.1, the For the People Act, which would go a long way toward making America an actual representative democracy.

The significance of those two measures is that they indicate that Democratic leaders have not just learned that they must deliver visible and tangible benefits to citizens, like the direct stimulus payments included in the American Rescue Plan. They must also try to create conditions that make it harder for the minoritarian right to keep power, by doing things like strengthening unions and making voter suppression more difficult.

It is, unfortunately, premature to say definitively that Democrats have kicked their old, self-sabotaging habits. For one thing, the Senate is still the Senate. The legislative filibuster remains in place, and while one conservative Democrat, Senator Joe Manchin, has signaled an openness to altering it significantly, Arizona’s Kyrsten Sinema has made the worryingly specific claim that she supports a 60-vote threshold “for all Senate actions.”

The Senate also refuses to work efficiently or to move quickly. The Biden recovery plan was drawn up months ago, and the deals that won the support of moderates such as Manchin were hashed out in a day. The reason it passed in March instead of early February is mainly that, well, that’s how the Senate works: slowly, or not at all.

And once the Senate did finally train its attention on the bill, “moderates” took aim at some of the bill’s more popular provisions, which also happened to be some of the ones that most directly benefited people. Without clearly explaining why they were so fixated on these provisions, the moderates reduced the number of people who are eligible for the direct payments, and they stripped an increase in the federal minimum wage out of the bill. Those moves were notable less for their effect on the final legislation than for what they may have signaled about the priorities of these senators: Whatever the Democratic left is most excited about will be negotiated down.

Now, no matter how many times White House insiders say they are determined not to repeat the mistakes of the past, it’s hard not to notice one clear parallel to 2009–2010: Nancy Pelosi’s disciplined House is passing major legislation at a steady clip; the Senate is letting it pile up, and its leaders can give no clear indication of when they will get to all of it.

On electoral reform, for example, one side is not waiting. The Brennan Center is currently tracking “253 bills with provisions that restrict voting access in 43 states.” One American elections expert refers to the campaign as “the greatest rollback of voting rights in this country since the Jim Crow era.” Republicans nationwide are treating the fight as existential: Rather than change the party, they are changing the electorate. Democrats ought to understand the fight on similar terms. Voting rights need to be secured, and electoral procedure federalized, to stop Republicans from effectively rigging elections to make it nearly impossible for Democrats to control the government.

However, it is unclear when the Senate will actually get to the For the People Act. Senate Rules Committee chair Amy Klobuchar suggested to Talking Points Memo that her committee might take it up “this month.” After that, the bill will eventually, inevitably run into the buzzsaw of the filibuster. That is actually part of the plan. The pure, uncut 2010-era thinking behind party leaders’ strategy is to have it be defeated on the floor multiple times rather than (or as a precursor to) passing it with a simple majority.

“You bring it to the floor a few times and let them obstruct it,” Rhode Island’s Sheldon Whitehouse told TPM.  “And you see what effect bad-faith obstruction has on some of our members’ views about the filibuster.”

This is the plan to pass a bill that Democrats literally numbered one, in each chamber, as a sign of how important they think it is.

Numbering aside, it does not appear that battling voter suppression will be the next business the Senate turns to. Apparently acting without guidance from the White House, Senate Majority Leader Chuck Schumer has indicated that his next priority is not electoral or labor reform, or even climate change or health care. Next up, apparently, is confronting China. The Washington Post’s Jeff Stein and Jeanne Whalen report that Schumer believes Biden’s second “big bill” could be “legislation that seeks to counter China’s rising global power,” and that “the new proposal could fulfill the stated desire of both President Biden and centrist Senate Democrats to legislate across party lines.”

Regardless of the merits of the legislation (which seems, so far, like a lot of unrelated economic measures that can be spun as about confronting China), this is a head-scratching move. Even if polling suggests that Americans support “getting tough” on China, it does not seem like the sort of thing that should now monopolize the attention of a legislative body that can only do one thing at a time, and very slowly. According to Pew, one large group of voters does consider “limiting the power and influence of China” among its most important “long-range foreign policy goals.” That group is Republicans. Only about a third of Democrats believe it is “a top priority,” which puts it below even “strengthening the United Nations,” and well below priorities like limiting the spread of infectious disease and addressing climate change.

Seeking a bipartisan “win” while urgent liberal priorities are set aside for later is—like arguing that giving Republicans opportunities to obstruct popular things will prove, once and for all, that they cannot be negotiated with in good faith—some unfortunately familiar Democratic thinking.

What Democrats in Congress do over the rest of this year will be a test of their instinct for self-preservation. That instinct has often, in the past, led them wildly astray, as they sought to avoid contentious issues rather than move on urgent ones, and sidelined measures to create material conditions that would make it easier for them to win and hold power. They say they’ve learned from these mistakes. They offer as proof the successful passage of a large, good, and popular bill. The question now is whether they will coast on that achievement and return to more politically familiar and comfortable ground—like chasing bipartisanship or seeking to look tough on supposed foreign adversaries—rather than continuing the more difficult work of securing and expanding democracy.

Source: Have Democrats Learned Their Lesson?

President Biden says that if we do our part, we might be able to get together in small groups in July

Algorithms were under fire at a Senate hearing on social media