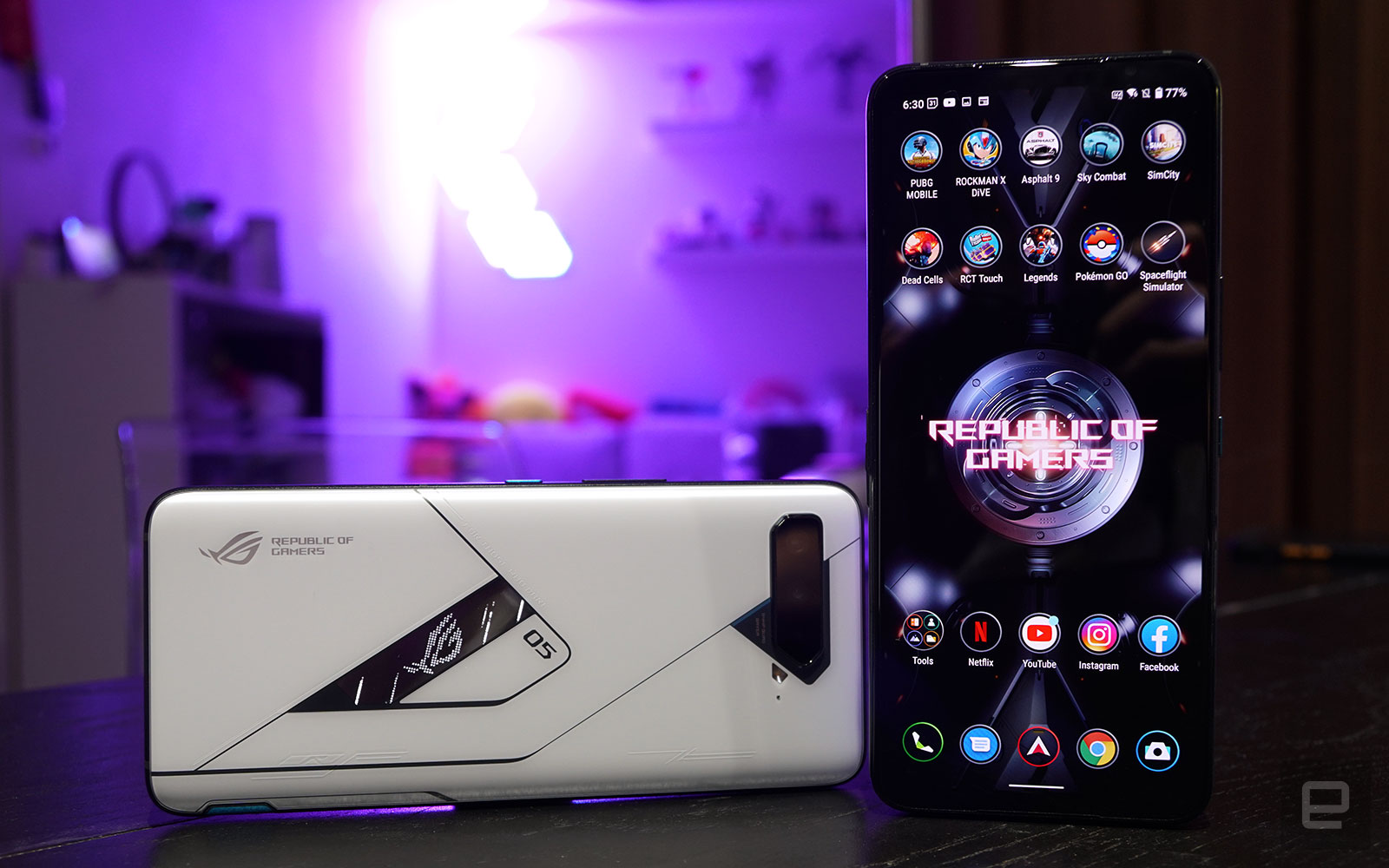 It's only been a little over seven months since ASUS launched its ROG Phone 3 gaming smartphone, but the company is already releasing a follow-up model to join Qualcomm's Snapdragon 888 party. The latest series is dubbed ROG Phone 5 (skipping the “4” due to tetraphobia; you obviously don't want to associate gaming with death), and while it may appear to merely don some minor cosmetic changes, the innards have been completely revamped for better heat dissipation, weight distribution and audio performance. As a bonus, there's also a Pro model plus a limited edition ROG Phone 5 Ultimate, with the latter boasting a whopping 18GB of RAM.

Let's get the basics out of the way first. In addition to the processor, all three models share the same 6.78-inch Samsung E4 AMOLED display, which packs the same 144Hz refresh rate as before (so Nubia wins this round with 165Hz), but with a slightly taller 2,448 x 1,080 resolution and a slightly faster 300Hz touch sampling rate — giving you an edge over other gamers in terms of responsiveness and accuracy. For those who are wondering, ASUS says there are now over 200 games that support 144Hz refresh rate, with titles including Rockman X Dive, Dead Cells, Shadowgun Legends and more.

ASUS claims this panel is also 23 percent brighter (up to 800 nits across the entire panel), while pushing the dimmest setting to 5 nits with minimal distortion — the latter making a notable difference in the dark areas in videos. It's also rated with a wide 111-percent DCI-P3 gamut, 150.89-percent sRGB gamut, Delta-E of <1 accuracy and HDR10+ support. And yes, there’s still an optical in-display fingerprint reader here.

As much as I enjoy the display improvements, it wasn't until I started a game of PUBG that I noticed this screen has rounder corners than before, which cut off some info and buttons. Luckily, I could go into the game's graphics settings and tweak the “non-standard screens” parameter, but this may become a problem for other titles that lack such option. 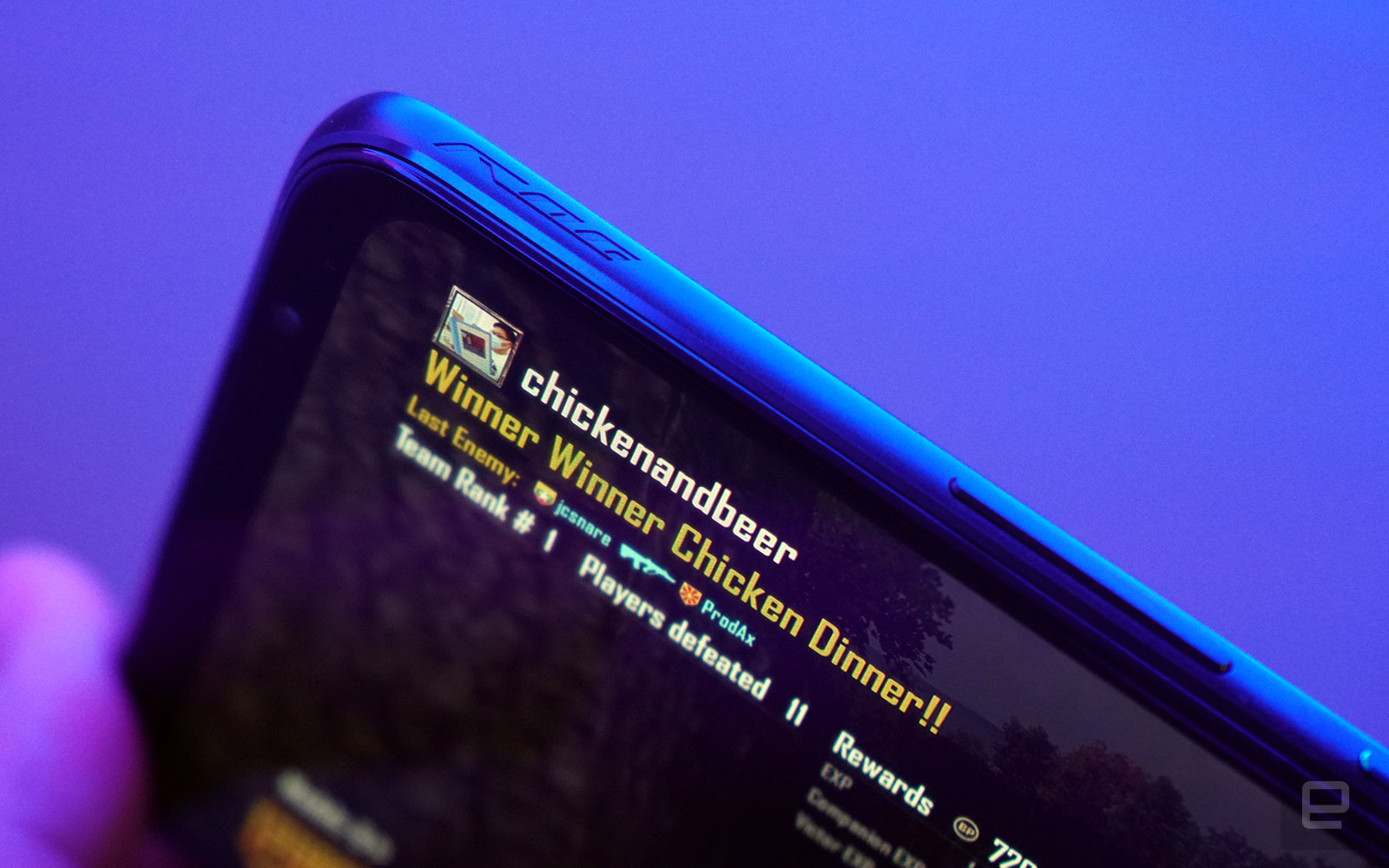 Another less obvious but notable upgrade applied to the ROG Phone 5 is the ultrasonic shoulder trigger feature. The new AirTrigger 5 buttons pack more sensors (nine instead of seven) into the same space for improved sensitivity and accuracy, and they are now placed closer to the edges to accommodate smaller hands. Like before, each AirTrigger support swipe gestures, slide gestures (both horizontal and vertical), continuous trigger (long press to simulate multiple clicks) and dual partitioning, giving you a wide range of customizable options. Though personally, I find that the good old default mode is already sufficient for my first-person shooters.

While most smartphones feature an L-shaped logic board with the processor placed near the top, ASUS found a way to place the Snapdragon 888 right in the middle of the ROG Phone 5 — far away from both hands when in landscape mode. This is mainly thanks to MMT (Middle Middle Tab) battery technology which features a higher energy density, thus allowing for a split cell design without sacrificing the generous 6,000mAh total battery capacity. As a bonus, the two cells also offer better weight distribution and thermal control — up to 7 degrees Celsius lower battery temperature when using 30W charging, and up to 3 degrees Celsius lower when using 65W (as bundled with the ROG Phone 5), according to ASUS. 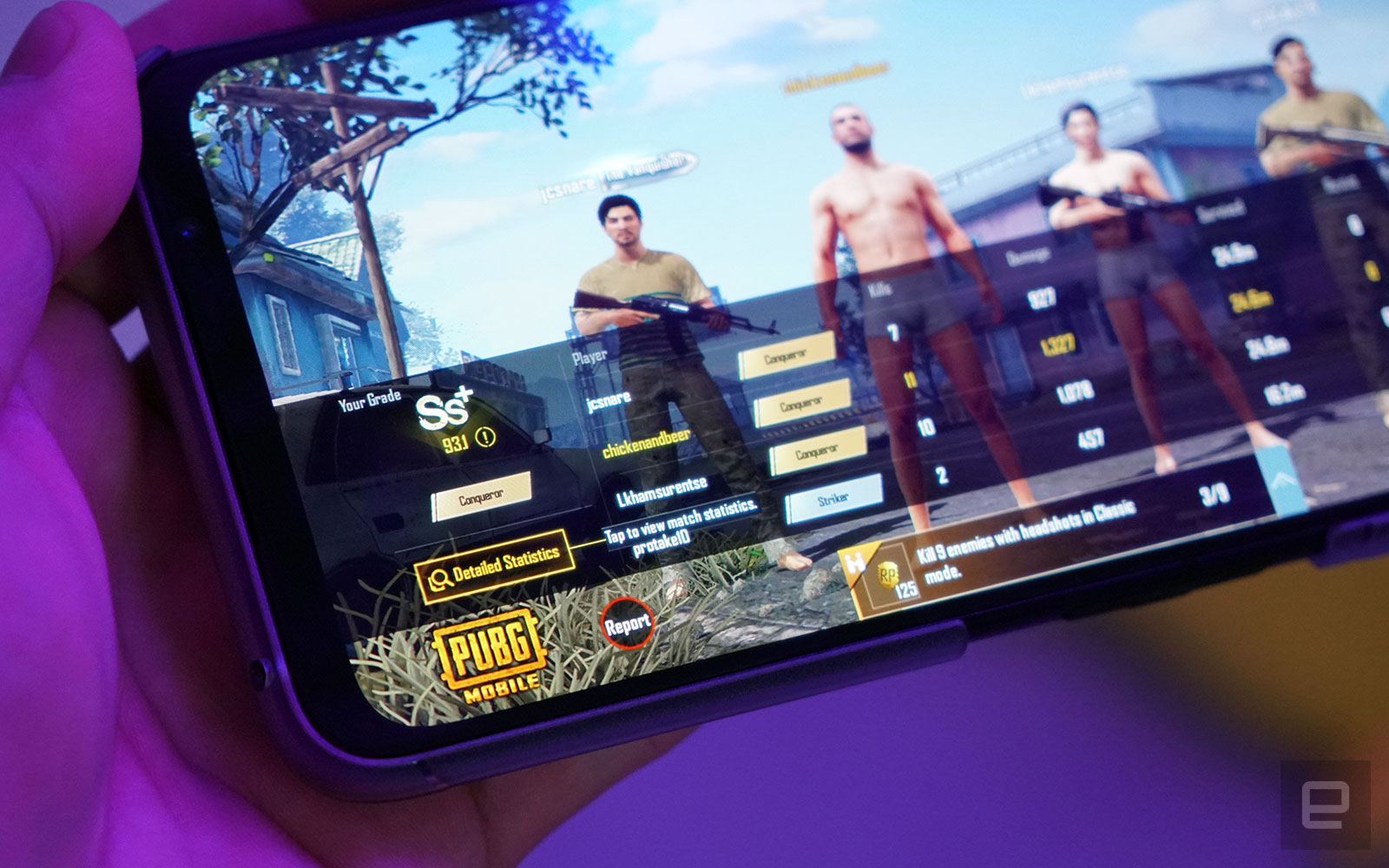 This new internal layout, along with the taller body, thinner display panel, new side-mounted port and lack of an external 5G modem (thanks to the Snapdragon 888), allowed ASUS to squeeze extra space into the ROG Phone 5's front-facing stereo speakers. These have the same 1.2cc chamber space each, thus allowing for a symmetrical audio performance as well as improved richness (the ROG Phone 3 actually had a smaller speaker chamber on one side). On top of that, the new Cirrus Logic CS35L45 mono amp driving each 7-magnet 12x16mm speaker is apparently 21-percent more powerful than before. (It's also worth noting that the ROG Phone 5 still has quad-mic noise cancellation.)

Hardware alone doesn't complete the puzzle, though. Following the impressive results on the ROG Phone 3, ASUS continued its partnership with Dirac for audio tuning on the ROG Phone 5. The Swedish audio specialist has since come up with a dedicated solution for smartphones, which apparently resulted in more accurate calibrations for dampening distortion, enhancing the perceived bass, widening the soundstage and more on this new gaming phone. ASUS even tapped into Dirac's MIMO (Multiple-Input and Multiple-Output) technologies — previously reserved for luxury cars only — to co-optimize both speakers as one system for a better overall acoustical response. 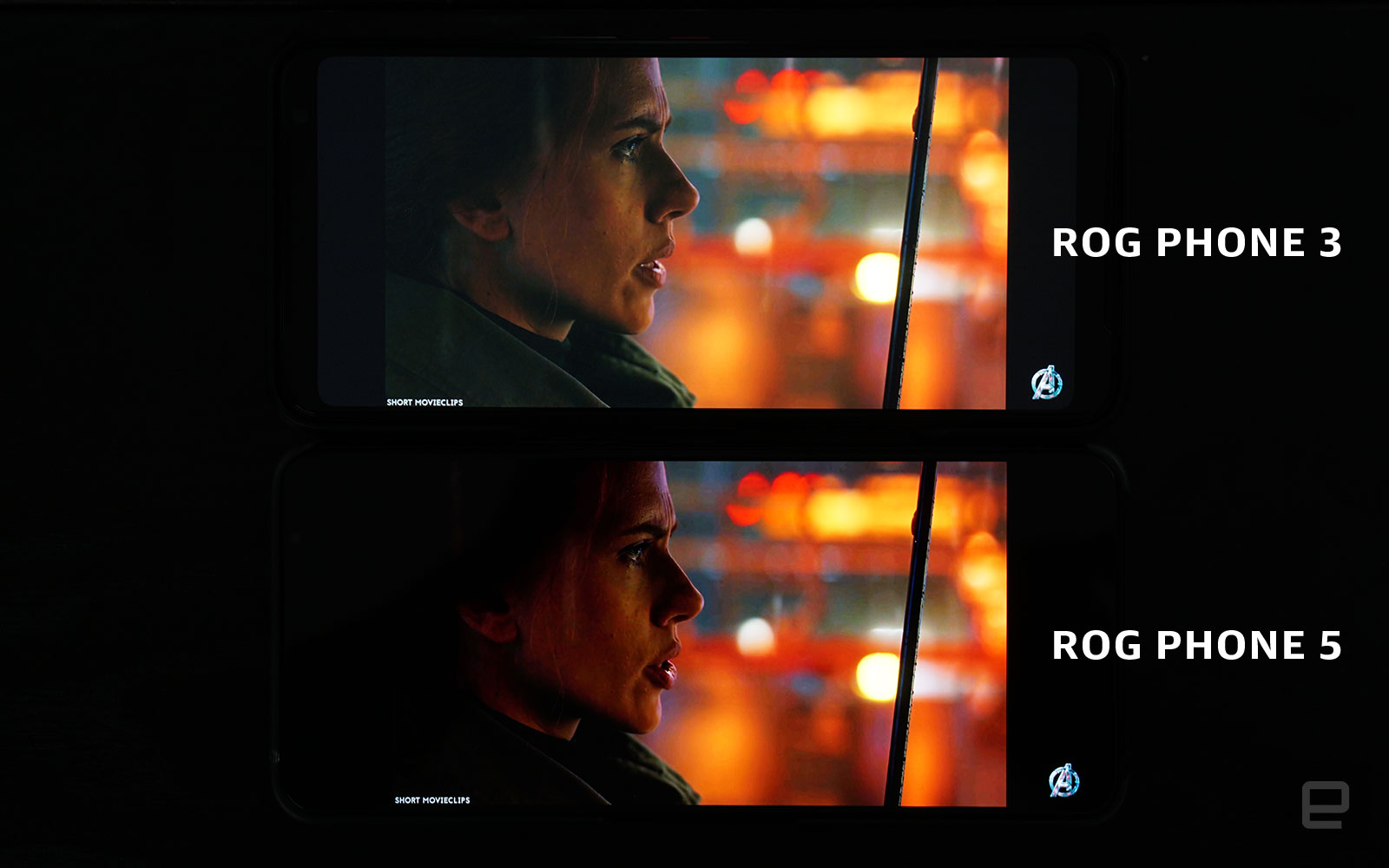 In a quick comparison with the ROG Phone 3 and the ROG Phone 5, the audio improvement was noticeable. In the rainy Tokyo scene where Natasha found Hawkeye in Avengers: Endgame, everything sounded shallower on the older phone, with the tinny rainfall noise dominating the dialog and music. The ROG Phone 5, on the other hand, sounded louder, richer and deeper. The difference was rather surprising, given how impressed I already was with the ROG Phone 3. Then I realized I could enable a “cinema” option in the AudioWizard's new “scenario effect” setting, which further boosted the perceived bass.

ASUS hasn't forgotten headphone users who still prefer the good old 3.5mm jack. The ROG Phone 5 has gained an ESS Sabre ES9280AC Pro Quad DAC, which can apparently deliver a “best-in-class” signal-to-noise ratio of 130 dB, and can also drive headphones with slightly higher impedance (over 50 ohm) using 2Vrms output. This should pair well with the newly released ROG Cetra II Core earbuds, which offer a seemingly impressive 20Hz-40kHz range. But if you want a wireless option, ASUS is also releasing the ROG Strix Go BT II today, which offers up to 45 hours of battery life along with AI noise cancellation.

On the photography side, you'll also find the same set of cameras across the ROG Phone 5 series. In fact, the four shooters are identical to the ones on the ROG Phone 3. The rear trio include a 64MP f/1.8 main camera (Sony IMX686 sensor), a 13MP f/2.4 125-degree ultra-wide camera and a 5MP f/2.0 macro camera, whereas the front side feature a 24MP f/2.45 selfie cam. 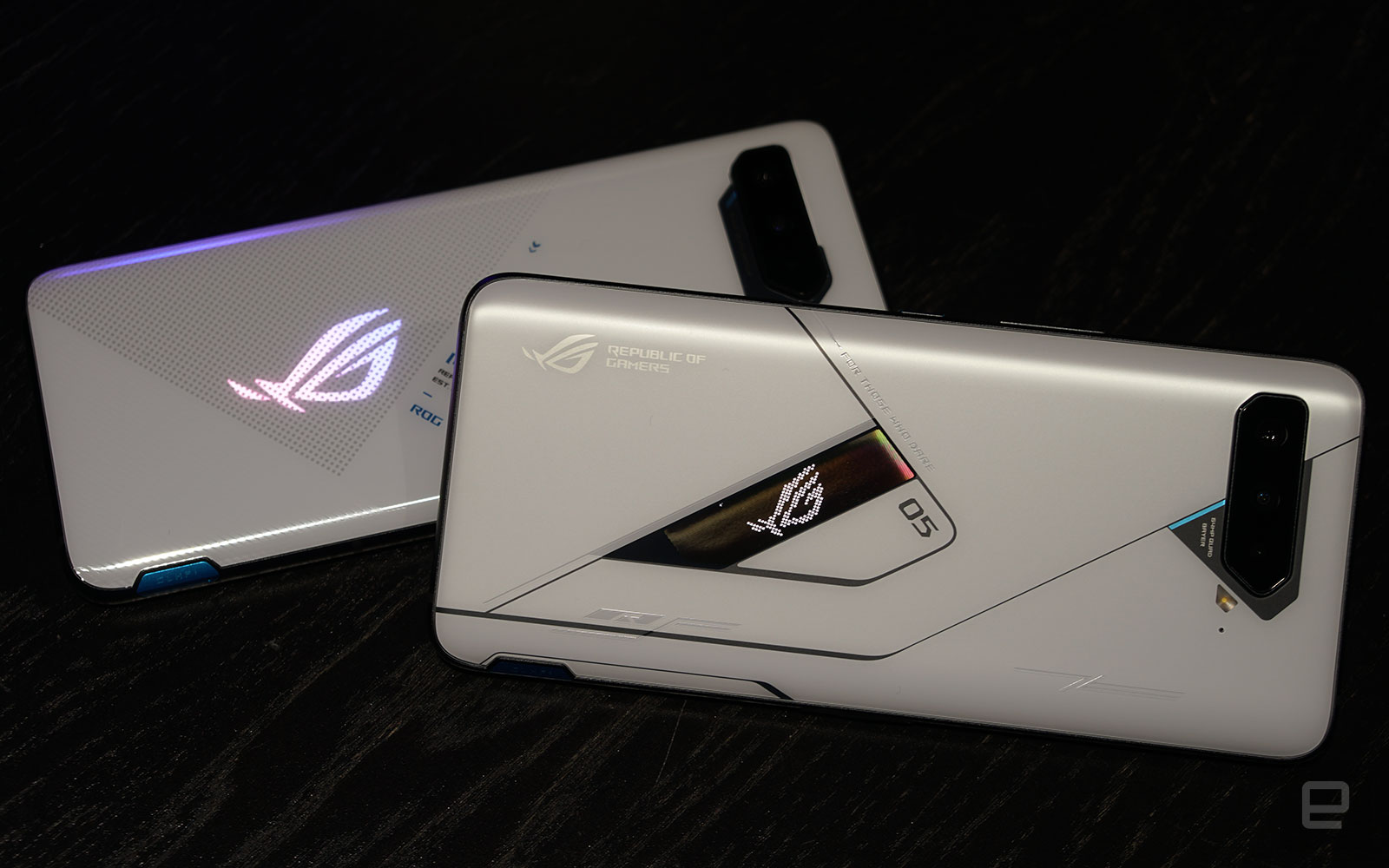 Things get a little more interesting with the ROG Phone 5 Pro and limited ROG Phone 5 Ultimate. The first thing you'll notice is the small “ROG Vision” PMOLED color screen on the rear side, which lets you display customizable graphics for incoming calls, charging, gaming and other scenarios. With the Ultimate edition, ASUS picked a bold move by equipping it with a monochrome rear screen to go with its matte white finish. Furthermore, both models offer two additional capacitive touch areas on the rear panel, in case you still need more mappable buttons for your hardcore gaming.

Speaking of, it's worth pointing out that the updated Game Genie app here offers an “Esports Mode,” which enables “do not disturb” but disables all key mapping, macros, quick controls and more (so no AirTriggers and no rear touch panels). This may come in handy for tournament organizers who want more control over a fair game. Game Genie also now offers audio haptics to select games (namely PUBG), which automatically maps specific sounds like, say, shooting, to haptic feedback, and different weapons provide different feel to make the game more immersive. But again, Esports Mode disables audio haptics.

Much like the Nubia Red Magic 6 Pro “Dao” edition, the ROG Phone 5 Ultimate even offers a generous 18GB of LPDDR5 RAM (supplied by SK Hynix), though it shares the same 512GB UFS 3.1 storage as the 5 Pro, which packs 16GB of RAM. The Ultimate edition will also come with a gift box containing a baseball cap, a towel, a deck of playing cards, badges, stickers, mask cover and more.

ASUS rarely failed us when it came to the range of accessories for the ROG Phone series, but with the ROG Phone 5, it finally decided to retire the dual-screen TwinView Dock and Mobile Desktop Dock. ASUS admitted that these two devices were simply too pricey, which was probably a hint at weak adoption. 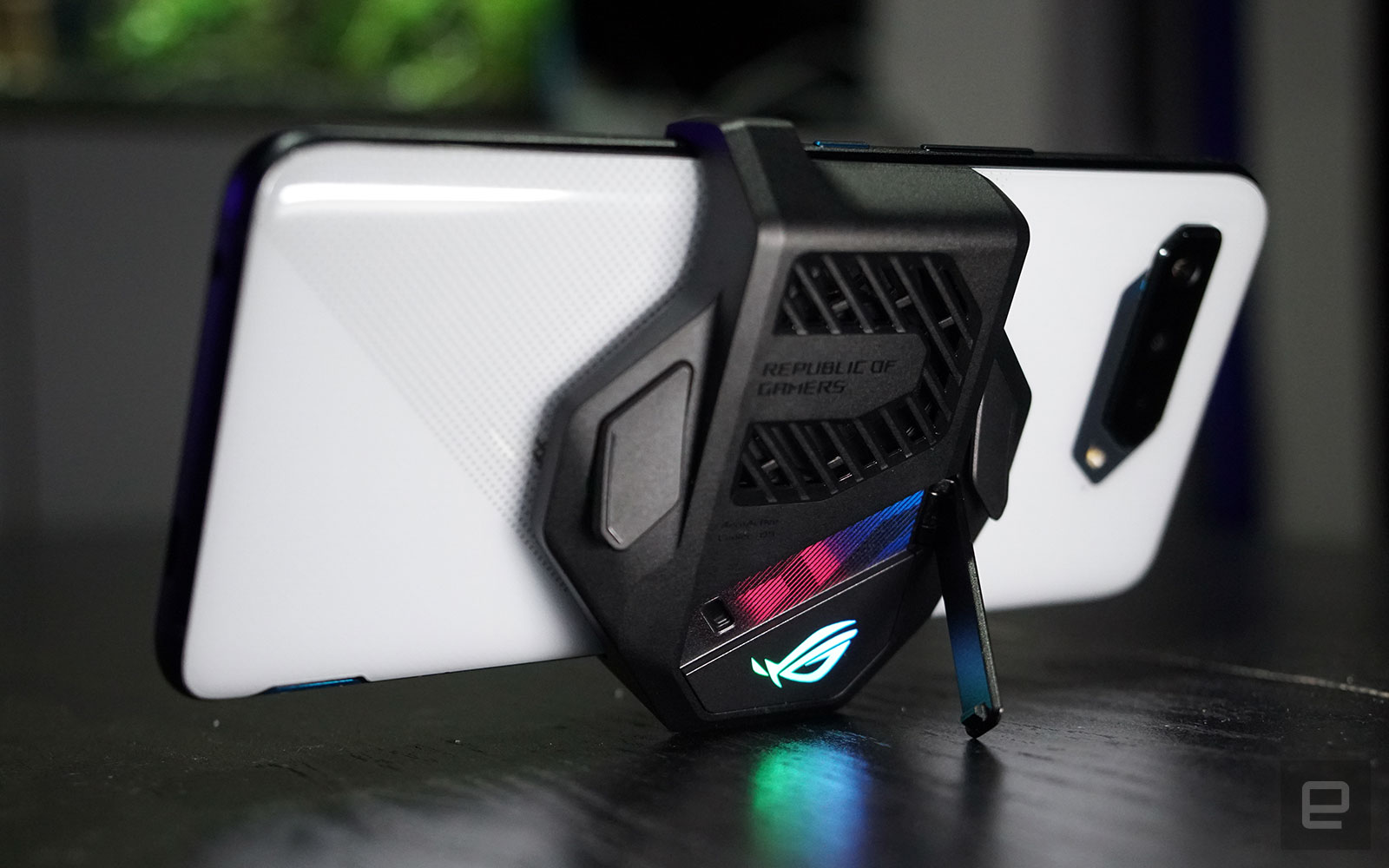 On the other hand, ASUS made a new AeroActive Cooler 5 which now blows directly at the hot spot, thanks to the repositioning of the processor. The company claims that this clip-on fan, with assistance from the vapor cooling chamber and graphite sheets on the inside, delivers up to 10 degrees Celsius lower CPU temperature, as well as up to 15 degrees Celsius lower surface temperature. On top of that, not only does this attachment still double as a kickstand, it adds two physical buttons as well. In other words, this means with the AeroActive Cooler 5, you get a total of four mappable buttons on the rear side of the Pro and Ultimate editions. Alas, if you're getting the regular ROG Phone 5, you'll have to buy this fan separately. 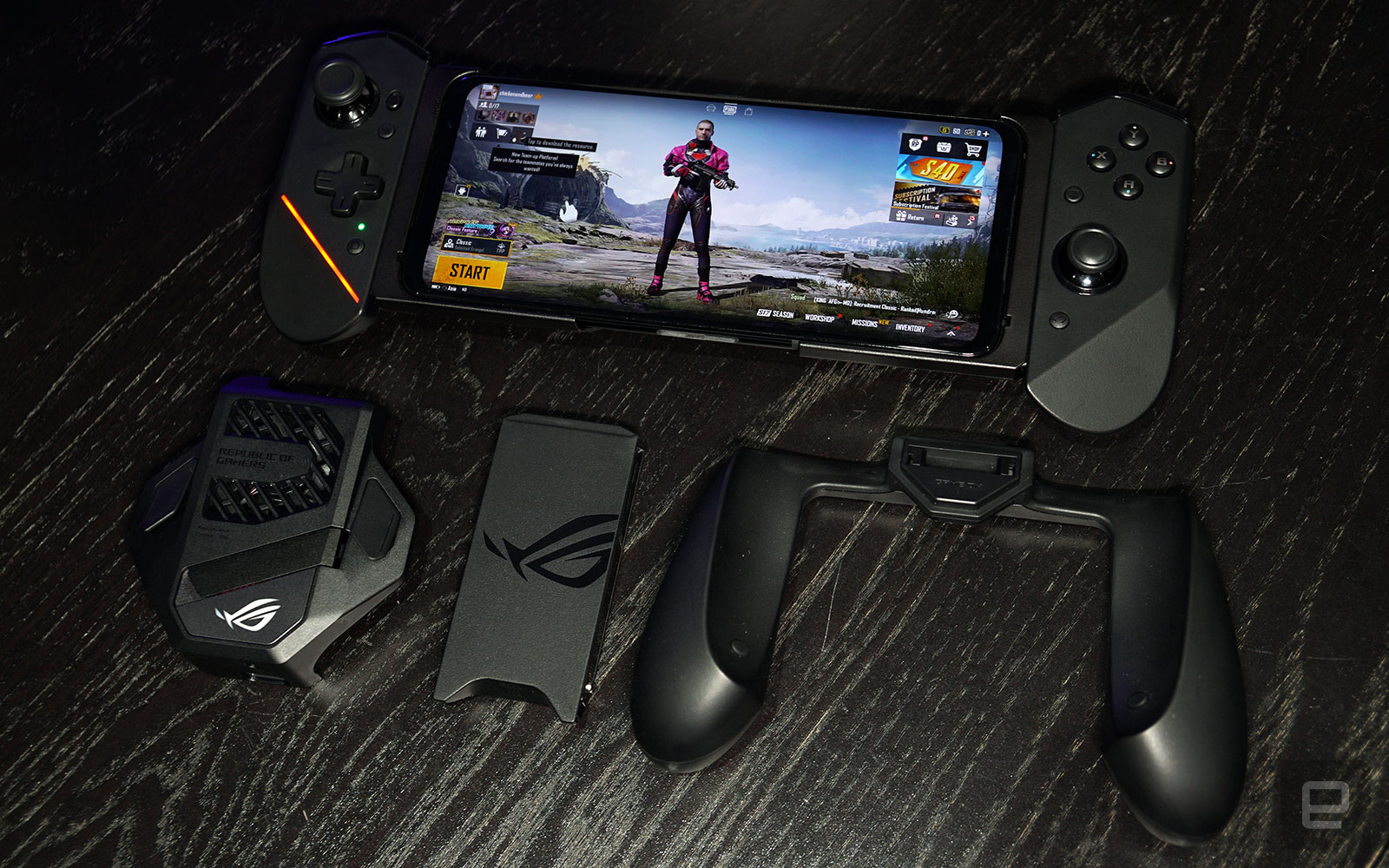 The ROG Phone 5 series also supports the Switch-like Kunai 3 Gamepad, so long as you have the updated version which comes with a bumper that fits the slightly longer body. Other optional accessories include the ROG Gaming Clip for attaching console controllers (for Xbox, PlayStation and Stadia), the new ROG Lighting Armor Case 3 (which utilizes the pogo pins on the redesigned side-mounted port) and the ASUS Professional Dock (for HDMI and USB expansion).

It appears that ASUS has once again delivered a well-thought-out package for mobile gamers, thanks to its engineering focus on audio performance, buttons, and cooling, with the Pro and Ultimate editions' ROG Vision screen serving as the cherry on the cake. We're waiting for confirmation on a US launch for the ROG Phone 5 series, but for now, we do know that the regular version is launching this month, ranging from 799 euros (8GB RAM and 128GB storage) to 999 euros (16GB+256GB) in Europe. The Pro edition will launch in April for 1,199 euros (16GB RAM+512GB), followed by the Ultimate edition in May with a 1,299 euros price tag (18GB+512GB).

‘Careers have no gender’, connect girls to tech, for a brighter future UN urges